Originally inhabiting the vast lands of what we call America today, Native Americans played a crucial role in shaping the country as it is now. Their teachings and beliefs often reflect their simple way of life, respect for nature that nourishes them, and unmatched courage.

The fierceness in their spirits have since been instilled as the very foundation that enabled their lineage and culture to stand the test of time. However, modernity across the globe threatens to overshadow their customs — the beating heart of their origin, their identity.

One of the things we can do to help preserve their traditions is to simply recognize and appreciate the wisdom conveyed in these Native American quotes.

One does not sell the land people walk on.

You have to look deeper, way below the anger, the hurt, the hate, the jealousy, the self-pity, way down deeper where the dreams lie, son. Find your dream. It’s the pursuit of the dream that heals you. – Billy Mills

I have seen that in any great undertaking it is not enough for a man to depend simply upon himself. – Shooter Teton Sioux 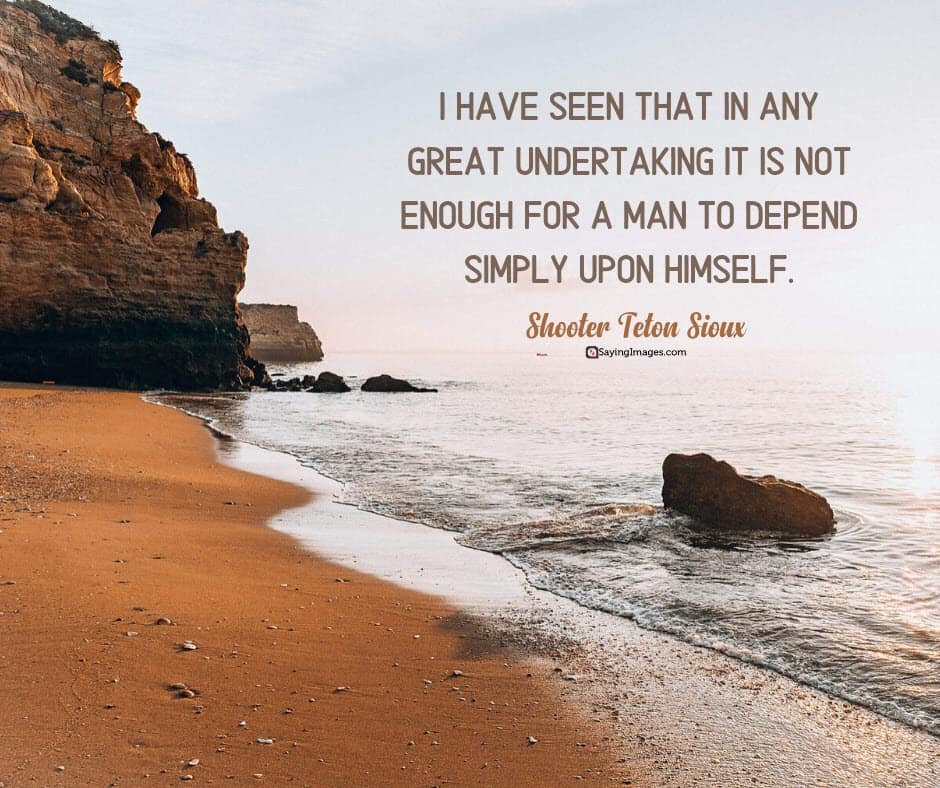 Before eating, always take time to thank the food. – Arapaho

The weakness of the enemy makes our strength. – Cherokee 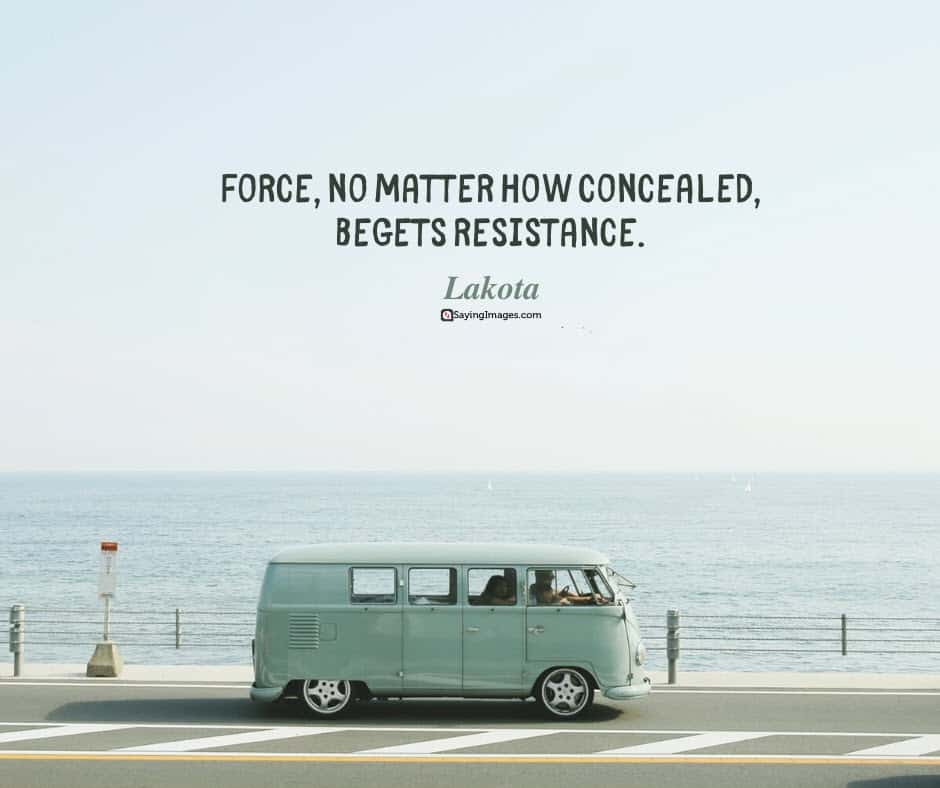 Poverty is a noose that strangles humility and breeds disrespect for God and man. – Sioux

Don’t be afraid to cry. It will free your mind of sorrowful thoughts. – Hopi

Humankind has not woven the web of life. We are but one thread within it. Whatever we do to the web, we do to ourselves. All things are bound together. All things connect. – Duwamish

It is less of a problem to be poor, than to be dishonest. – Anishinabe 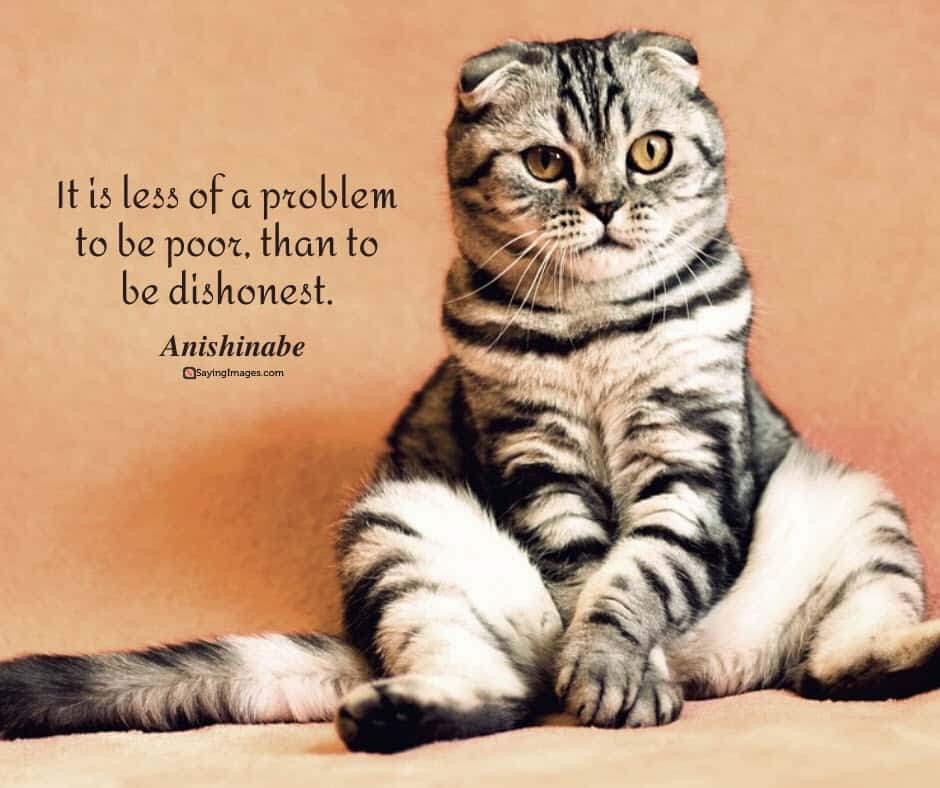 If a man is as wise as a serpent, he can afford to be as harmless as a dove. – Cheyenne

It does not require many words to speak the truth. – Nez Perce

What is life? It is the flash of a firefly in the night. It is the breath of a buffalo in the wintertime. It is the little shadow which runs across the grass and loses itself in the sunset. 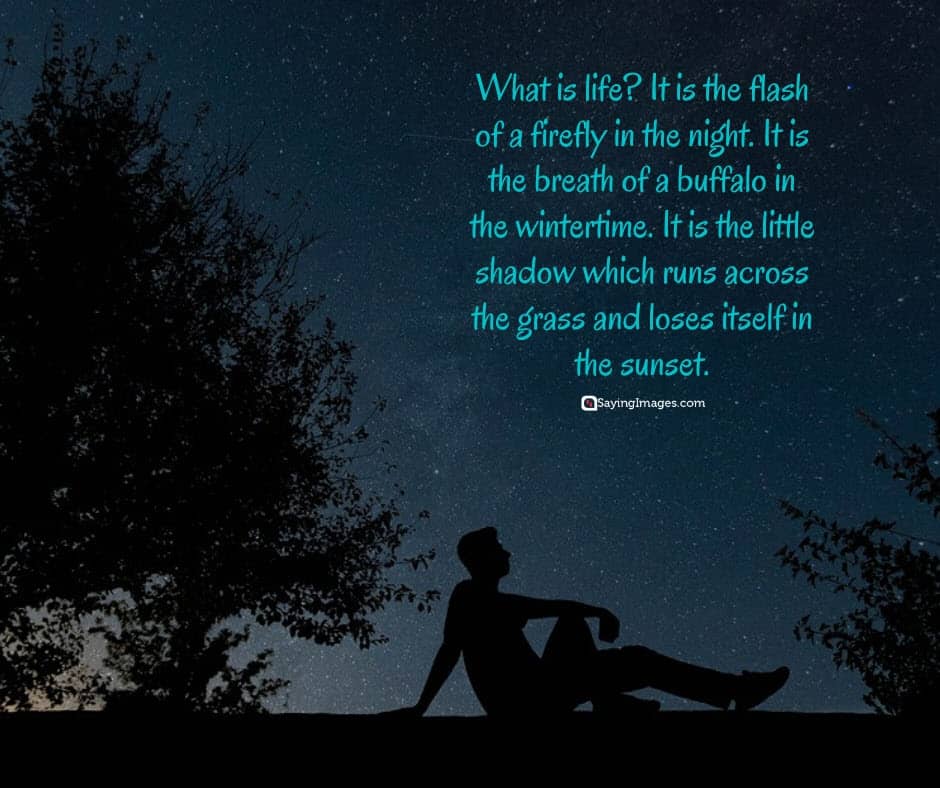 We always return to our first loves.

Do not judge your neighbor until you walk two moons in his moccasins. – Cheyenne

When you were born, you cried and the world rejoiced. Live your life so that when you die, the world cries and you rejoice. – Cherokee

When we show our respect for other living things, they respond with respect for us. – Arapaho 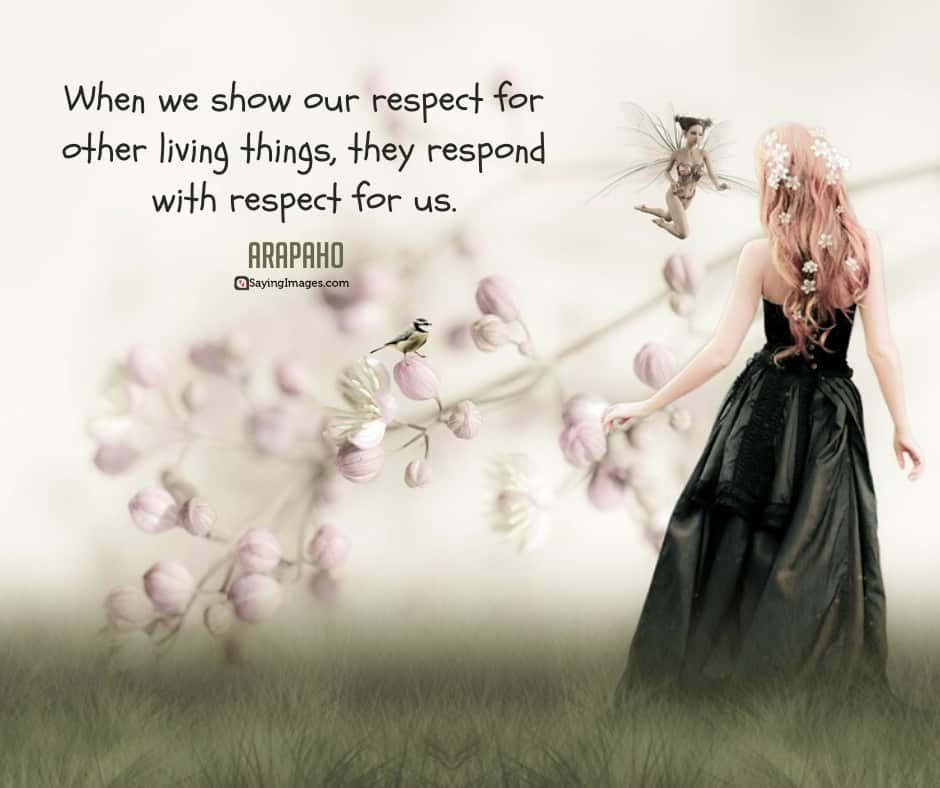 Even a small mouse has anger.

Tell me and I’ll forget. Show me, and I may not remember. Involve me, and I’ll understand.

Man’s law changes with his understanding of man. Only the laws of the spirit remain always the same. – Crow

It is better to have less thunder in the mouth and more lightning in the hand. – Apache 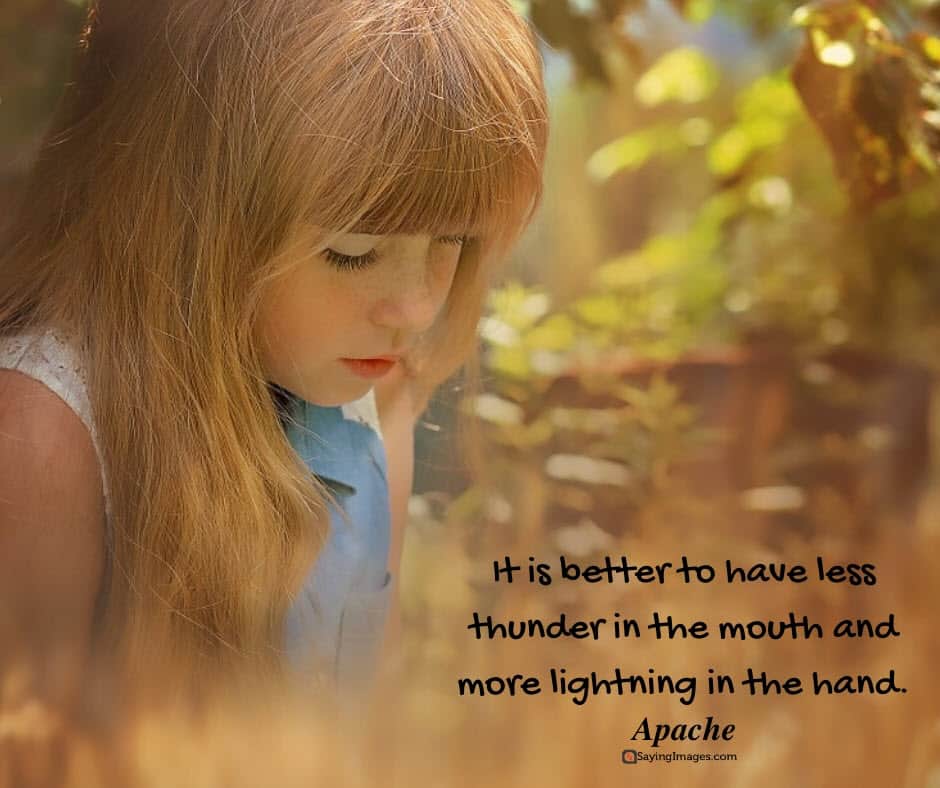 A frog does not drink up the pond in which it lives. – American Indian Proverb

When a man moves away from nature his heart becomes hard. – Lakota

Grown men can learn from very little children for the hearts of the little children are pure. Therefore, the Great Spirit may show to them many things which older people miss. – Oglala Lakota Sioux

Life is not separate from death. It only looks that way. 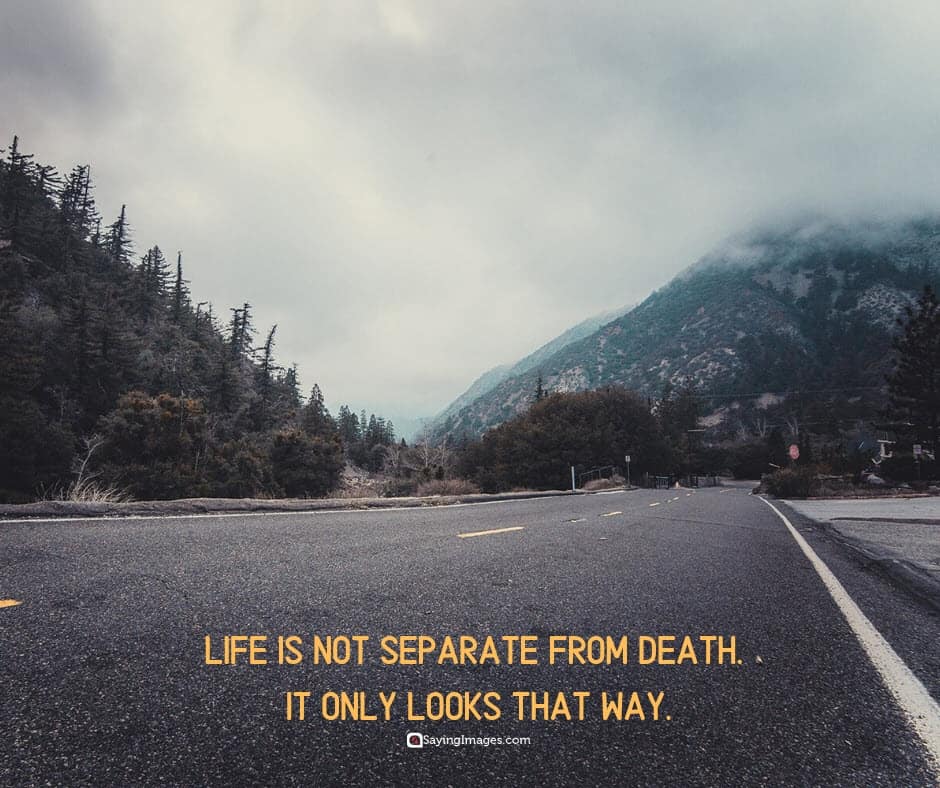 This war did not spring up on our land, this war was brought upon us by the children of the Great Father who came to take our land without a price, and who, in our land, do a great many evil things… This war has come from robbery – from the stealing of our land.

The rainbow is a sign from Him who is in all things. – Hopi

Old age is not as honorable as death, but most people want it. – Crow

When you know who you are; when your mission is clear and you burn with the inner fire of unbreakable will; no cold can touch your heart; no deluge can dampen your purpose. You know that you are alive. 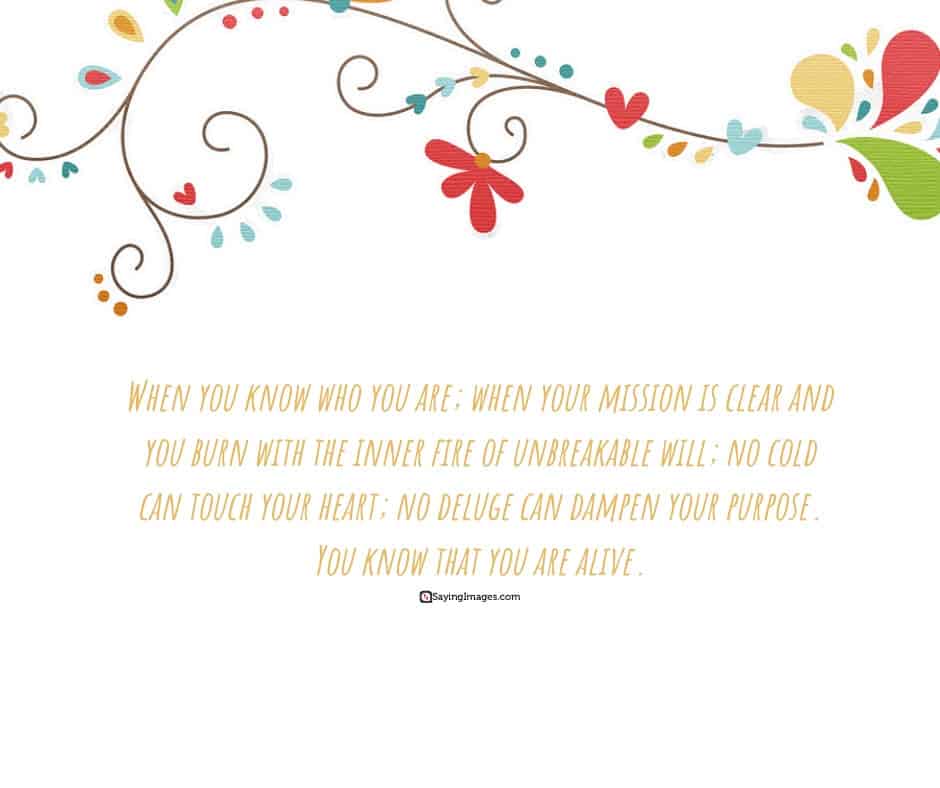 All who have died are equal. – Comanche

Those that lie down with dogs, get up with fleas.

All dreams spin-out from the same web. – Hopi

We will be known forever by the tracks we leave. – Dakota 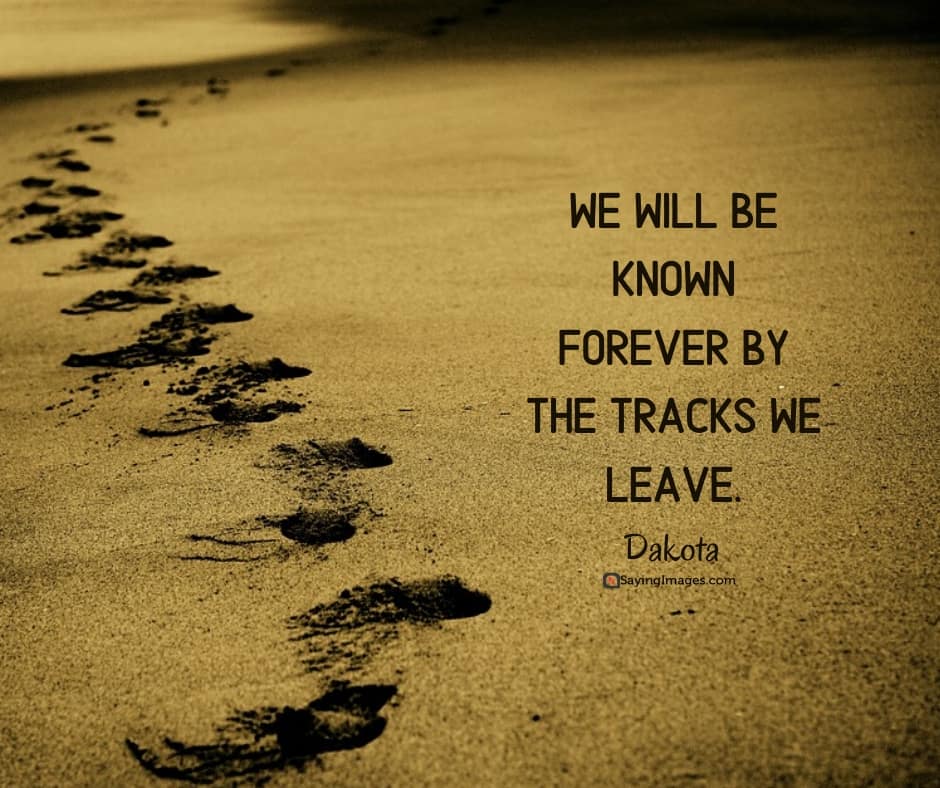 Beware of the man who does not talk, and the dog that does not bark. – Cheyenne

He who would do great things should not attempt them all alone. – Seneca

Everything on the earth has a purpose, every disease an herb to cure it, and every person a mission. This is the Indian theory of existence. – Mourning Dove Salish 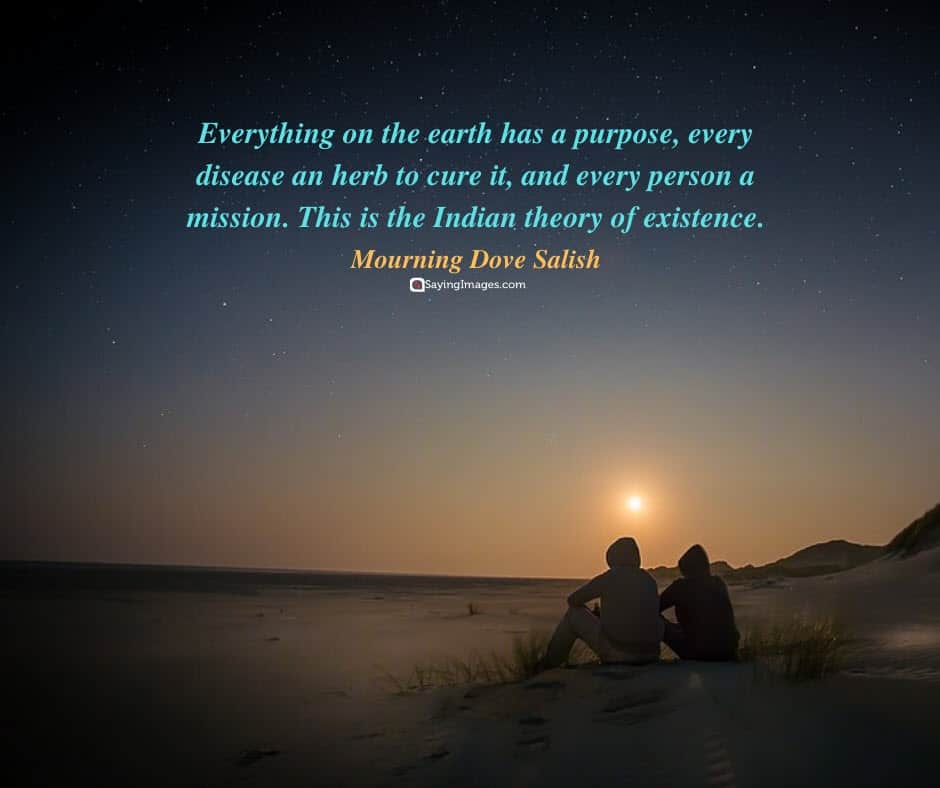 If we wonder often, the gift of knowledge will come. – Arapaho

You already possess everything necessary to become great. – Crow

There is no death, only a change of worlds. – Duwamish 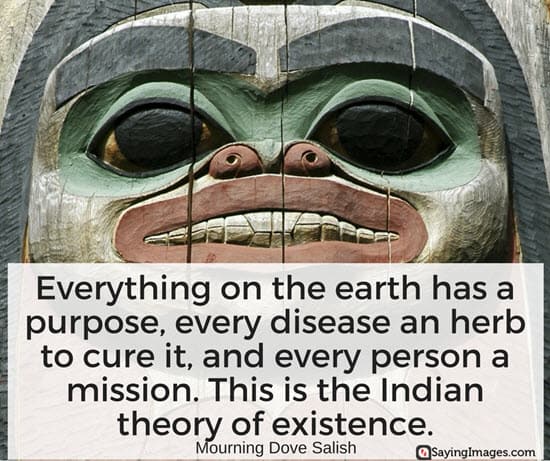 Among the Indians there have been no written laws. Customs handed down from generation to generation have been the only laws to guide them. Every one might act different from what was considered right did he choose to do so, but such acts would bring upon him the censure of the Nation…. This fear of the Nation’s censure acted as a mighty band, binding all in one social, honorable compact. – Tecumseh Shawnee

The ground on which we stand is sacred ground. It is the blood of our ancestors. – Chief Plenty Coups, “Crow” 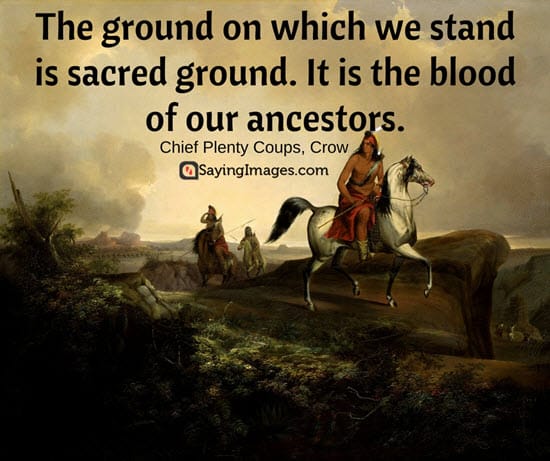 How smooth must be the language of the whites, when they can make right look like wrong, and wrong like right. – Black Hawk, Sauk

Our first teacher is our own heart. – Cheyenne 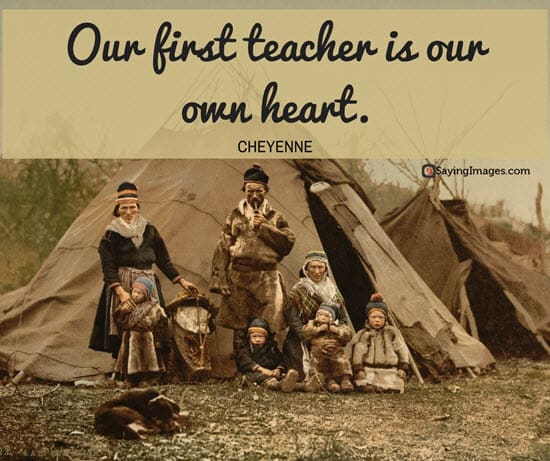 Children learn from what they see. We need to set an example of truth and action. – Howard Rainer, “Taos Pueblo-Creek”

We know our lands have now become more valuable. The white people think we do not know their value; but we know that the land is everlasting, and the few goods we receive for it are soon worn out and gone. – Canassatego

Everyone who is successful must have dreamed of something. – Maricopa 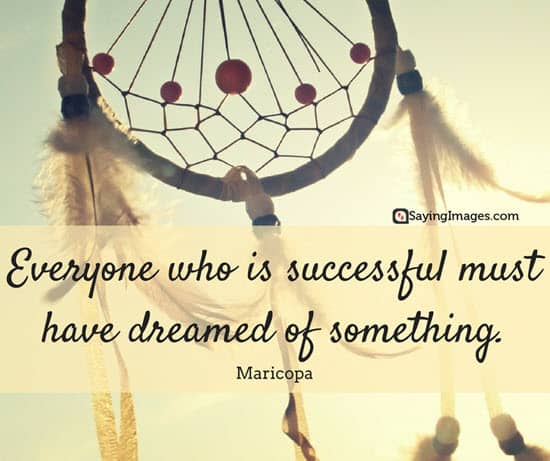 You can’t wake a person who is pretending to be asleep. – Navajo

Remember that your children are not your own, but are lent to you by the Creator. – Mohawk 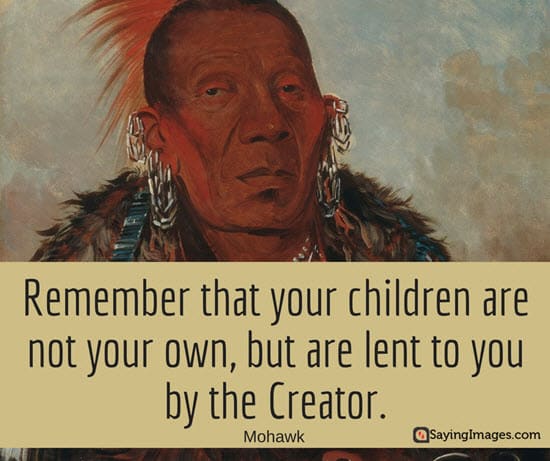 When the Earth is sick, the animals will begin to disappear, when that happens, The Warriors of the Rainbow will come to save them.

I was hostile to the white man…We preferred hunting to a life of idleness on our reservations. At times we did not get enough to eat and we were not allowed to hunt. All we wanted was peace and to be let alone. Soldiers came…in the winter..and destroyed our villages. Then Long Hair (Custer) came…They said we massacred him, but he would have done the same to us. Our first impulse was to escape…but we were so hemmed in we had to fight. After that I lived in peace, but the government would not let me alone. I was not allowed to remain quiet. I was tired of fighting…They tried to confine me..and a soldier ran his bayonet into me. I have spoken.

Share these Native American quotes to celebrate the genuine simplicity of their teachings.