Do you know your Dracula quotes, people?

Too many people think that they know the real Count Dracula. He appears on so much of our media and has been depicted from a monster to a laughable cartoon character on Sunday mornings. During Halloween, we dress up as a vampire with no hesitation and practically everyone has seen Twilight, that movie of beautiful and sparkly vampires.

The real dracula though is Bram Stoker’s Dracula from his novel of the same name published as far back as 1897. The character was modeled after 15th century Prince Vlad III the Impaler who had a reputation for cruelty and violence. The book character Count Dracula was mentioned to be a “most wonderful man” in life. As a centuries-old vampire, he is a cordial, enigmatic, and mysteriously charismatic character.

Read the book how he unfolds his plans for world domination and how he sows terror in London. In the meantime, enjoy these Dracula quotes and understand the mind behind.

“There are darknesses in life and there are lights, and you are one of the lights, the light of all lights.” 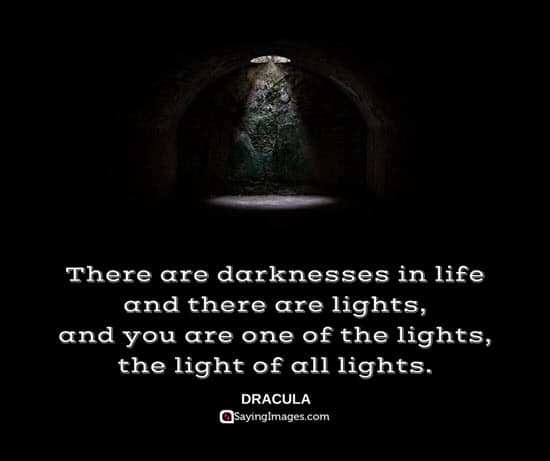 “How good and thoughtful he is; the world seems full of good men–even if there are monsters in it.”

“Listen to them, the children of the night. What music they make!” 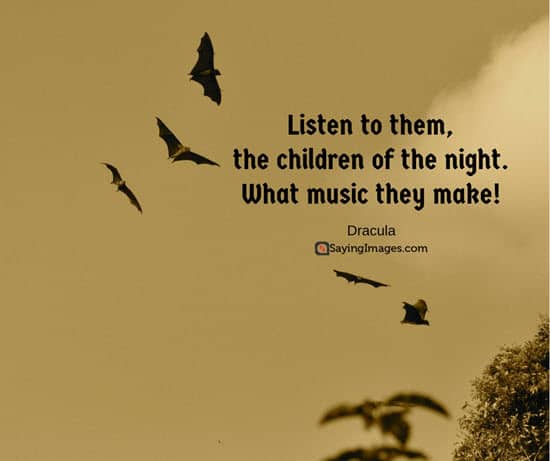 “Do you not think that there are things which you cannot understand, and yet which are; that some people see things that others cannot? But there are things old and new which must not be contemplate by men´s eyes, because they know -or think they know- some things which other men have told them. Ah, it is the fault of our science that it wants to explain all; and if it explain not, then it says there is nothing to explain.”

“We learn from failure, not from success!”

“Welcome to my house! Enter freely. Go safely, and leave something of the happiness you bring.” 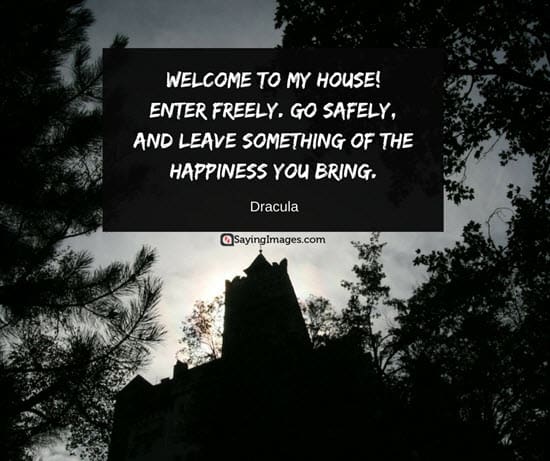 “The last I saw of Count Dracula was his kissing his hand to me, with a red light of triumph in his eyes, and with a smile that Judas in hell might be proud of.”

“Ah, it is the fault of our science that it wants to explain all; and if it explain not, then it says there is nothing to explain.”

“I am longing to be with you, and by the sea, where we can talk together freely and build our castles in the air.” 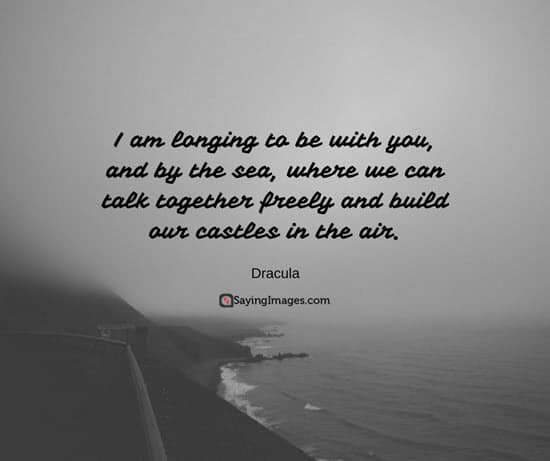 “For life be, after all, only a waitin’ for somethin’ else than what we’re doin’; and death be all that we can rightly depend on.”

“I suppose that we women are such cowards that we think a man will save us from fears, and we marry him.”

“There is a reason why all things are as they are.” 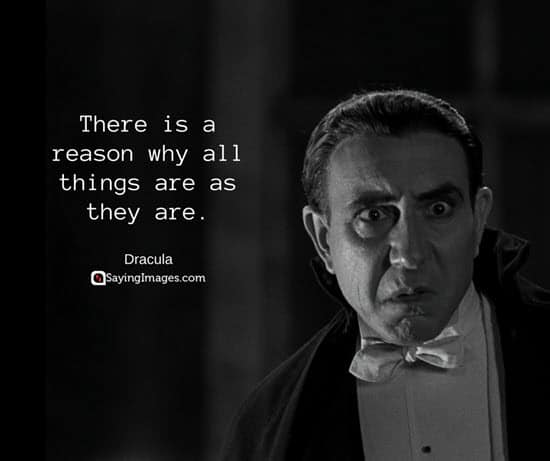 “Doctor, you don’t know what it is to doubt everything, even yourself. No, you don’t; you couldn’t with eyebrows like yours.”

“The blood is the life!”

“Remember my friend, that knowledge is stronger than memory, and we should not trust the weaker” 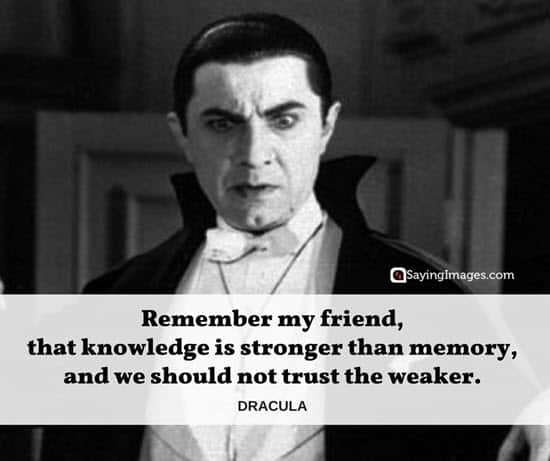 “I am all in a sea of wonders. I doubt; I fear; I think strange things, which I dare not confess to my own soul.”

“Oh, my dear, if you only knew how strange is the matter regarding which I am here, it is you who would laugh. I have learned not to think little of any one’s belief, no matter how strange it may be. I have tried to keep an open mind, and it is not the ordinary things of life that could close it, but the strange things, the extraordinary things, the things that make one doubt if they be mad or sane.”

“Oh, the terrible struggle that I have had against sleep so often of late; the pain of the sleeplessness, or the pain of the fear of sleep, and with such unknown horror as it has for me! How blessed are some people, whose lives have no fears, no dreads; to whom sleep is a blessing that comes nightly, and brings nothing but sweet dreams.” 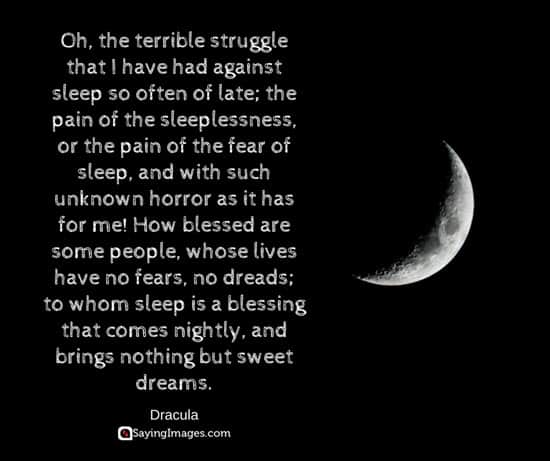 “Euthanasia” is an excellent and comforting word! I am grateful to whoever invented it.”

“Take me away from all this Death.”

“I want you to believe…to believe in things that you cannot.” 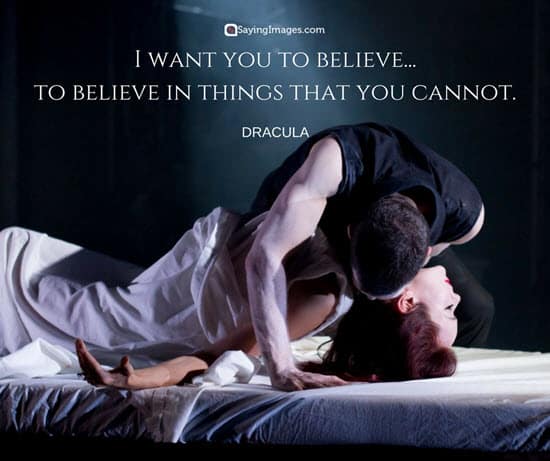 “But we are strong, each in our purpose, and we are all more strong together.”

“Despair has its own calms.” 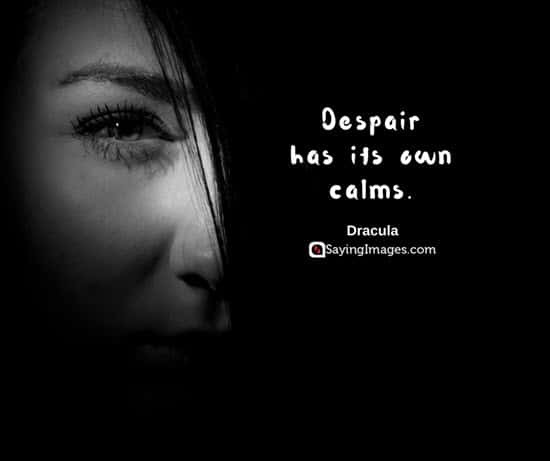 “I have a sort of empty feeling; nothing in the world seems of sufficient importance to be worth the doing.”

“Enter freely and of your own free will!”

“Loneliness will sit over our roofs with brooding wings.” 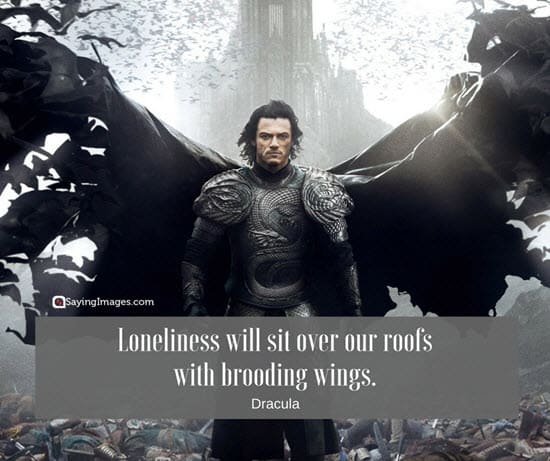 “Even if she be not harmed, her heart may fail her in so much and so many horrors; and hereafter she may suffer–both in waking, from her nerves, and in sleep, from her dreams.”

“I will not let you go into the unknown alone.”

“I sometimes think we must be all mad and that we shall wake to sanity in strait-waistcoats.” 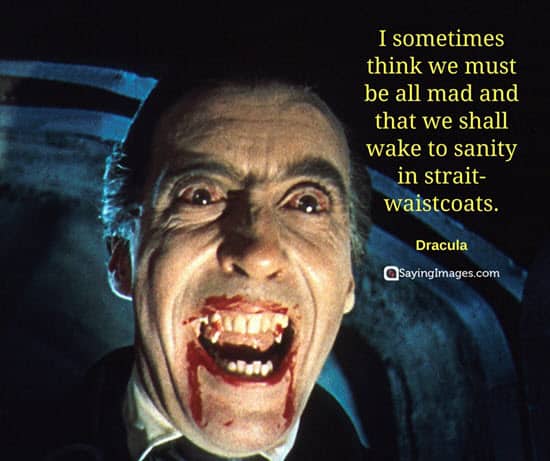 “This man belongs to me, I want him!”

“I suppose a cry does us all good at times-clears the air as other rain does.”

“No one but a woman can help a man when he is in trouble of the heart.” 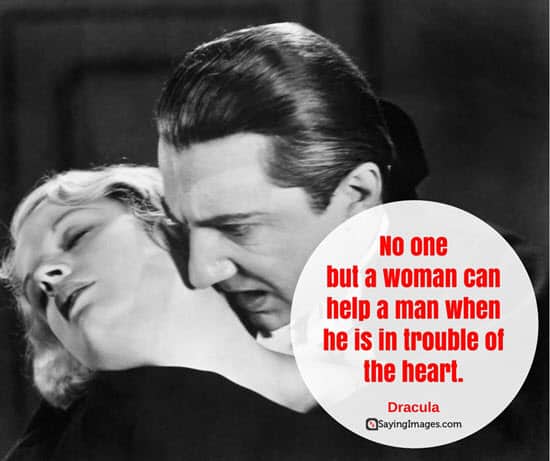 “Oh, why must a man like that be made unhappy when there are lots of girls about who would worship the very ground he trod on?”

“I could not resist the temptation of mystifying him a bit, I suppose it is some taste of the original apple that remains still in our mouths.”

“No man knows till he has suffered from the night how sweet and dear to his heart and eye the morning can be.” 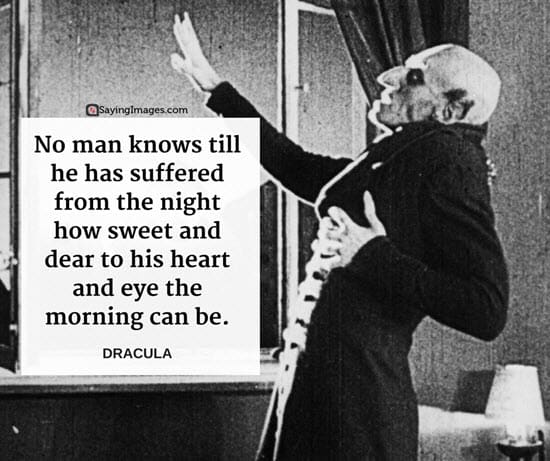 “I have always thought that a wild animal never looks so well as when some obstacle of pronounced durability is between us. A personal experience has intensified rather than diminished that idea.”

“There are bad dreams for those who sleep unwisely.”

“Though sympathy alone can’t alter facts, it can help to make them more bearable.” 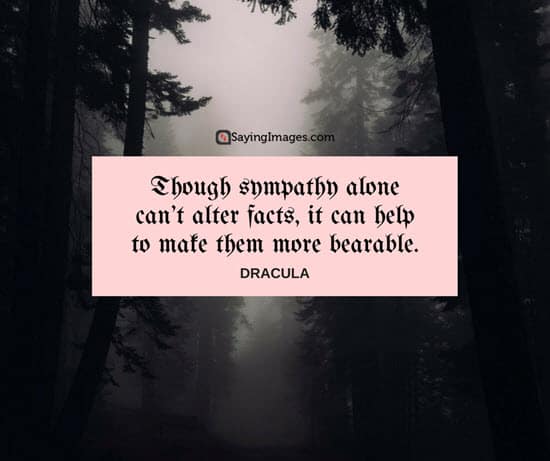 “How blessed are some people, whose lives have no fears, no dreads; to whom sleep is a blessing that comes nightly, and brings nothing but sweet dreams.”

“It is a strange world, a sad world, a world full of miseries, and woes, and troubles. And yet when King Laugh come, he make them all dance to the tune he play. Bleeding hearts, and dry bones of the churchyard, and tears that burn as they fall, all dance together to the music that he make with that smileless mouth of him. Ah, we men and women are like ropes drawn tight with strain that pull us different ways. Then tears come, and like the rain on the ropes, they brace us up, until perhaps the strain become too great, and we break. But King Laugh he come like the sunshine, and he ease off the strain again, and we bear to go on with our labor, what it may be.”

“No man knows till he experiences it, what it is like to feel his own life-blood drawn away into the woman he loves.” 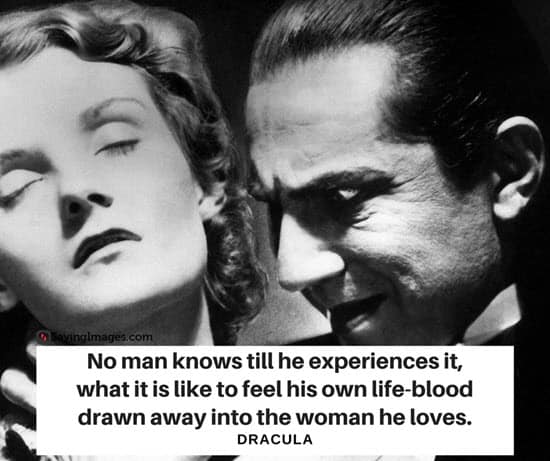 “I want to cut off her head and take out her heart.”

“Sleep has no place it can call its own.”

“Do you believe in destiny? That even the powers of time can be altered for a single purpose? That the luckiest man who walks on this earth is the one who finds… true love?” 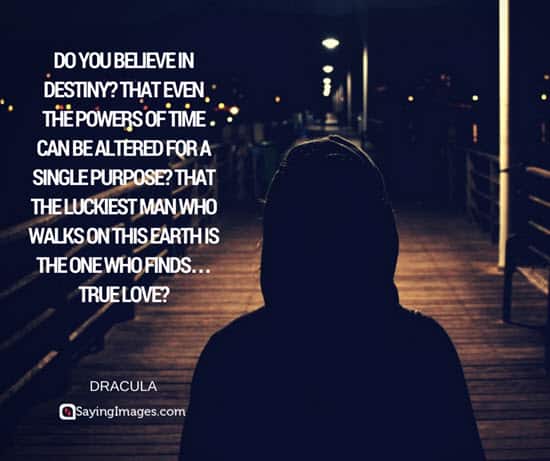 “She has man’s brain–a brain that a man should have were he much gifted–and woman’s heart. The good God fashioned her for a purpose, believe me when He made that so good combination.”

“There was a deliberate voluptuousness that was both thrilling and repulsive.
And as she arched her neck she actually licked her lips like an animal till I could see in the moonlight the moisture
Then lapped the white, sharp teeth.
Lower and lower went her head. I closed my eyes in a languorous ecstasy and waited. ”

“Come freely, go safely and leave something of the happiness you bring.” 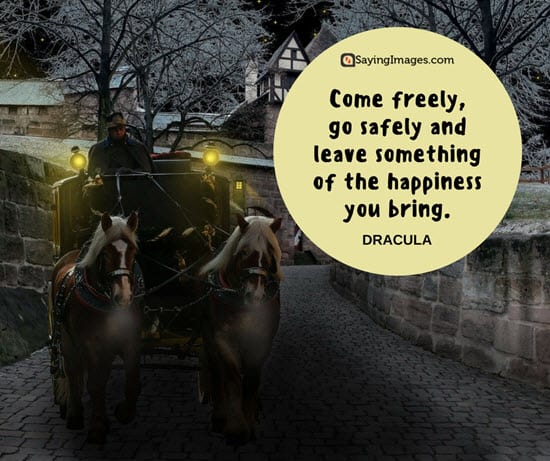 “There was one great tomb more lordly than all the rest; huge it was, and nobly proportioned. On it was but one word, DRACULA.”

“There are mysteries which men can only guess at, which age by age they may solve only in part.”

“But a stranger in a strange land, he is no one. Men know him not, and to know not is to care not for.” 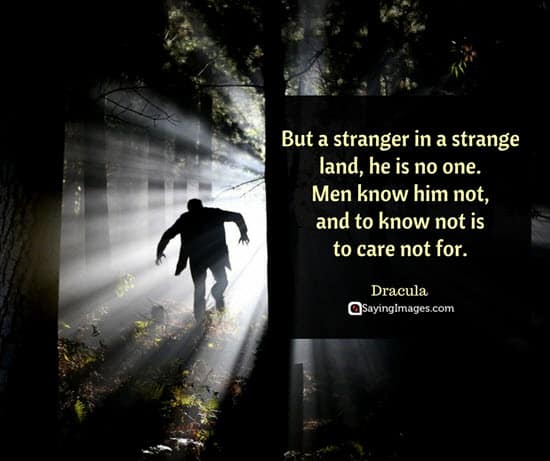 “The world seems full of good men, even if there are monsters in it.”

“We learn of great things by little experiences.”

“Because if a woman’s heart was free a man might have hope.” 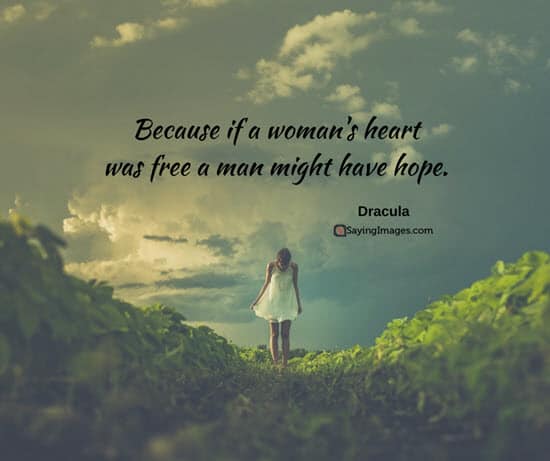 “It is only when a man feels himself face to face with such horrors that he can understand their true import.”

“Yes, there is some one I love, though he has not told me yet that he even loves me.”

“And yet, unless my senses deceive me, the old centuries had, and have, powers of their own which mere ‘modernity’ cannot kill.” 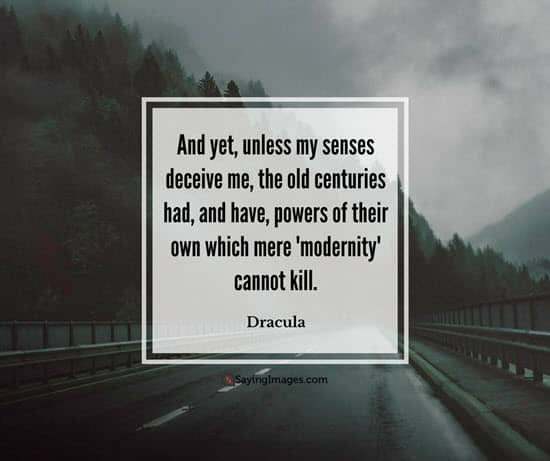 “It is a strange world, a sad world, a world full of miseries, and woes, and troubles; and yet when King Laugh come he make them all dance to the tune he play. Bleeding hearts, and dry bones of the churchyard, and tears that burn as they fall — all dance together to the music that he make with that smileless mouth of him.”