On January 26, 1950, the Constitution of India came into full effect, marking the country’s independence. Since then, India has never failed to pay tribute to its Republic Day.

As part of the celebration, a grand military parade is held in New Delhi. It involves participants from the country’s navy, air force, and army. Bravery medals and national awards are given that same day to common people, soldiers, and even students. It has also been a part of their tradition to welcome a prime minister of another country to be their chief guest.

Now, to help you celebrate this important event, here are some of the best Republic Day quotes we’ve gathered.

At the dawn of history India started on her unending quest, and trackless centuries are filled with her striving and the grandeur of her success and her failures. Through good and ill fortune alike she [India] has never lost sight of that quest or forgotten the ideals which gave her strength. –  Jawaharlal Nehru

India has two million gods, and worships them all. In religion all other countries are paupers; India is the only millionaire. – Mark Twain

A nation’s culture resides in the hearts and in the soul of its people. – Mahatma Gandhi 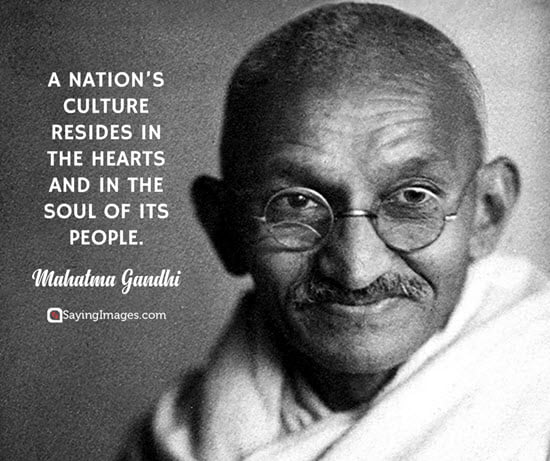 This republic was not established by cowards; and cowards will not preserve it. – Elmer Davis

Even if I died in the service of the nation, I would be proud of it. Every drop of my blood… will contribute to the growth of this nation and to make it strong and dynamic. – Indira Gandhi

When I read the Bhagavad-Gita and reflect about how God created this universe everything else seems so superfluous. –  Albert Einstein 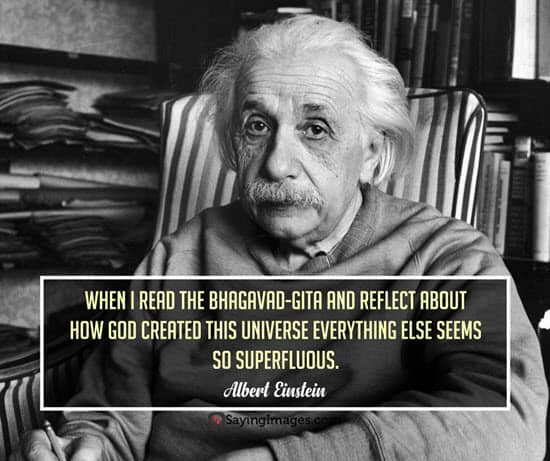 In the great books of India, an empire spoke to us, nothing small or unworthy, but large, serene, consistent, the voice of an old intelligence, which in another age and climate had pondered and thus disposed of the questions that exercise us. – Ralph Waldo Emerson

A man’s feet must be planted in his country, but his eyes should survey the world. – George Santayana

In the republic of mediocrity, genius is dangerous. – Robert Green Ingersoll 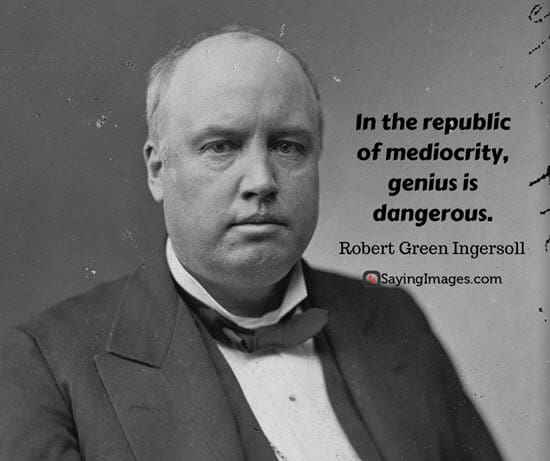 India – The land of Vedas, the remarkable works contain not only religious ideas for a perfect life, but also facts which science has proved true. Electricity, radium, electronics, airship, all were known to the seers who founded the Vedas. – Wheeler Wilcox

I think patriotism is like charity — it begins at home. – Henry James

Let new India arise out of peasants’ cottage, grasping the plough, out of huts, cobbler and sweeper. – Swami Vivekananda 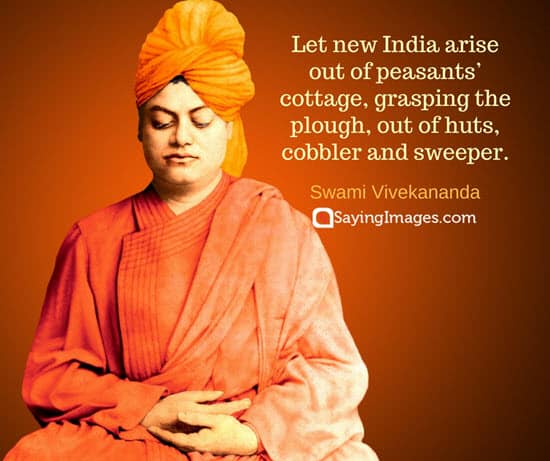 On what rests the hope of the republic? One country, one language, one flag! – Alexander Henry

A return to first principles in a republic is sometimes caused by the simple virtues of one man. His good example has such an influence that the good men strive to imitate him, and the wicked are ashamed to lead a life so contrary to his example. – Niccolo Machiavelli 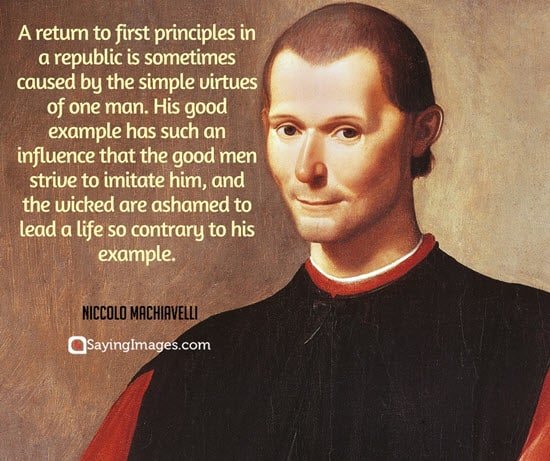 I have considered the pension list of the republic a roll of honor. – Grover Cleveland

You must be the change you want to see in the World. – Mahatma Gandhi

India is the cradle of the human race, the birthplace of human speech, the mother of history, the grandmother of legend, and the great grand mother of tradition. Our most valuable and most astrictive materials in the history of man are treasured up in India only! – Mark Twain 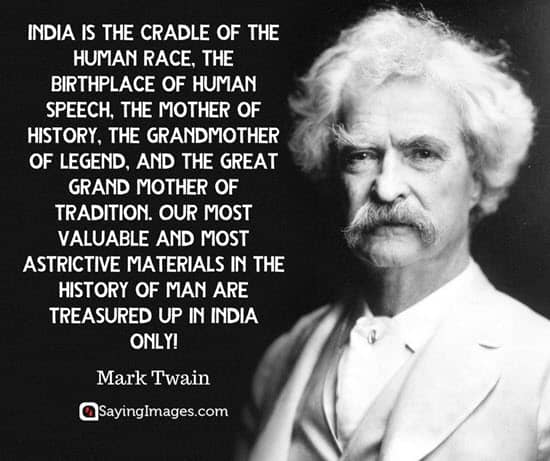 We end today a period of ill fortune and India discovers herself again. The achievement we celebrate today is but a step, an opening of opportunity, to the greater triumphs and achievements that await us. Are we brave enough and wise enough to grasp this opportunity and accept the challenge of the future? – Jawaharlal Nehru

If there is one place on the face of earth where all the dreams of living men have found a home from the very earliest days when man began the dream of existence, it is India. – Romain Rolland

Democracy means nothing if people are not able to work the democracy for the common good. – Chandra Bhushan 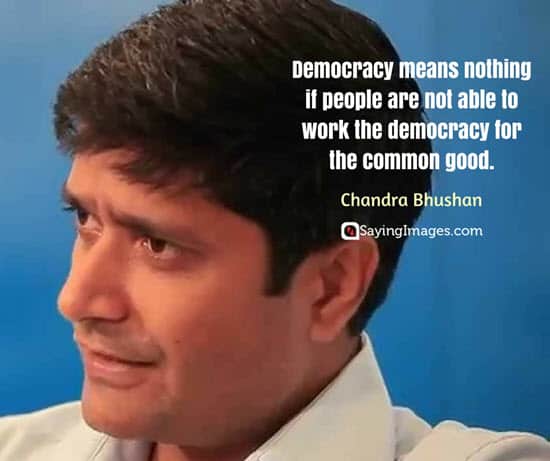 India conquered and dominated China culturally for 20 centuries without ever having to send a single soldier across her border! – Hu Shih

India has no dearth of brave young men and women and if they get the opportunity and help then we can compete with other nations in space exploration and one of them will fulfill her dreams. – Atal Behari Vajpayee

Let us together commence a journey of peace, harmony and progress in South Asia. – Atal Behari Vajpayee 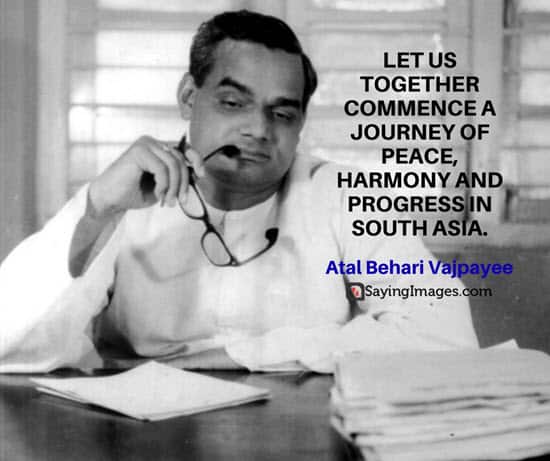 Behold a republic standing erect while empires all around are bowed beneath the weight of their own armaments – a republic whose flag is loved while other flags are only feared. – William Jennings Bryan

Citizenship consists in the service of the country. – Jawaharlal Nehru

Long years ago, we made a tryst with destiny and now the time comes when we shall redeem our pledge… At the stroke of the midnight hour, when the world sleeps, India will awake to life and freedom. – Jawaharlal Nehru 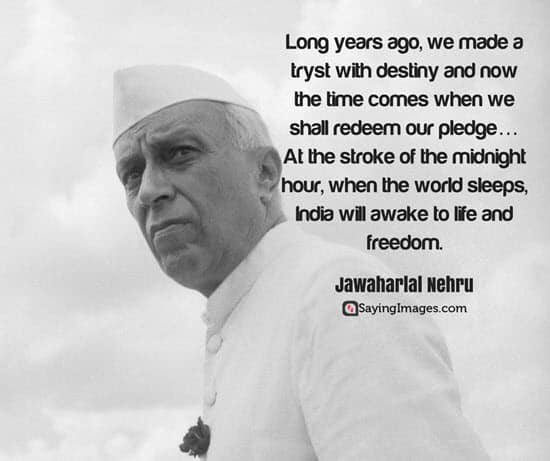 A republic – if you can keep it – is about limitation, and for good reason, because we are mortal and our actions are imperfect. – Mike Pence

For some days, people thought that India was shaking. But there are always tremors when a great tree falls. – Rajiv Gandhi

We are Indians, firstly and lastly. – B. R. Ambedkar 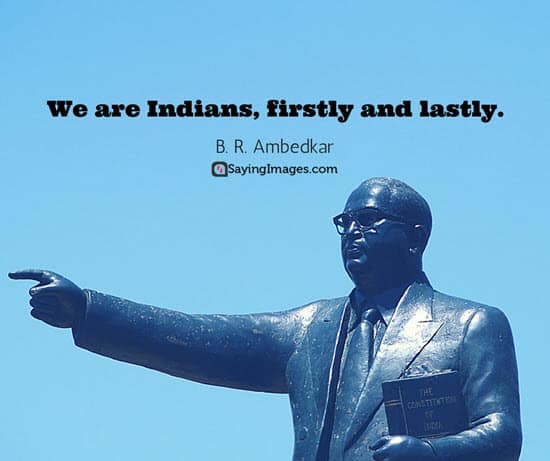 Today Is The Day When Everyone Young Or Old,
Tall Or Short,
Light Skin Or Dark Must Come Together
To Show The Whole World
That This Nation Is The Best Nation
Under The Sun.
Happy Republic Day! 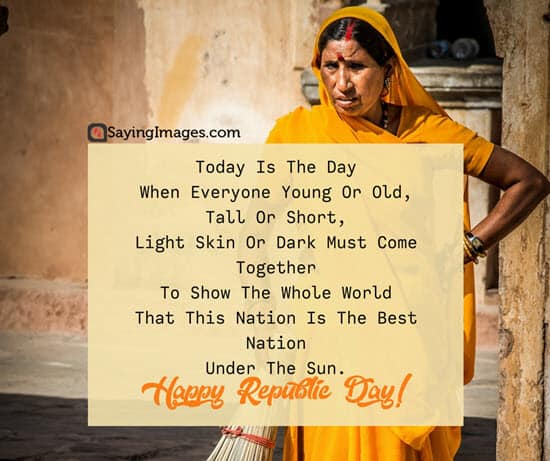 We Salute the Brave Souls of India
Bhagat Singh
Mahatma Gandhi
Sarojini Naidu and
Rabindranath Tagore
on This Republic Day!

We Might Not Be The Richest Nation In The World,
We Might Be Deprived Of The Finances
And The Luxuries Of This World,
But My Brothers And Sister
Let Us Maintain Our Peaceful Coexistence
And Above All Love For Our Nation.
Happy Republic Day! 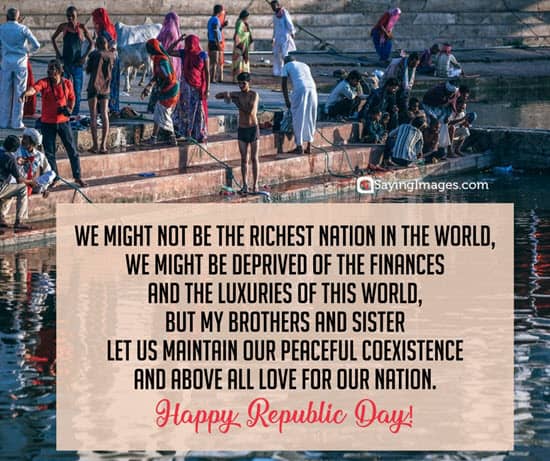 Waking Up Every Day In A Peaceful Nation
Is Not As Easy As It May Seem To Be.
We All Need To Be Proud Of
The Peaceful Atmosphere In Our Nation.
Happy Republic Nation!

Let Every Teacher Teach
The Student How To Love This Nation,
Let Every Parent Instill
In His Or Her Sons And Daughters
The Beauty Of Our Nation.
Happy Republic Day! 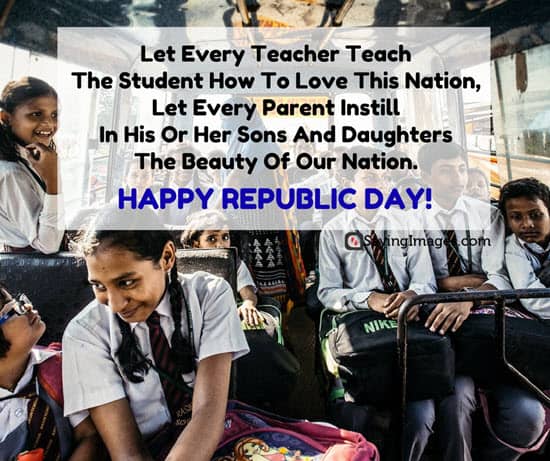 When They Resisted The Booming
And Shelling Of The Colonial Guns,
Our Founder Fathers Wanted Nothing
But Sovereignty For This Nation,
Let Us Always Defend This Gift
From Our Predecessors.
Happy Republic Day!

Independence Is Always A Wonderful Gift From God.
May This Wonderful Nation
Remain Independence Forever!
Happy Republic Day To You! 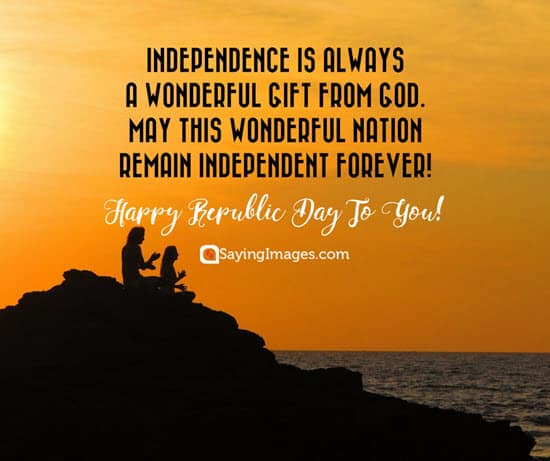 May You Have Enough Happiness
To Make You Sweet,
Enough Trials To Make You Strong,
Enough Sorrow To Keep You Human And
Enough Hope To Bring Joy To Our Nation.
Happy Republic Day! 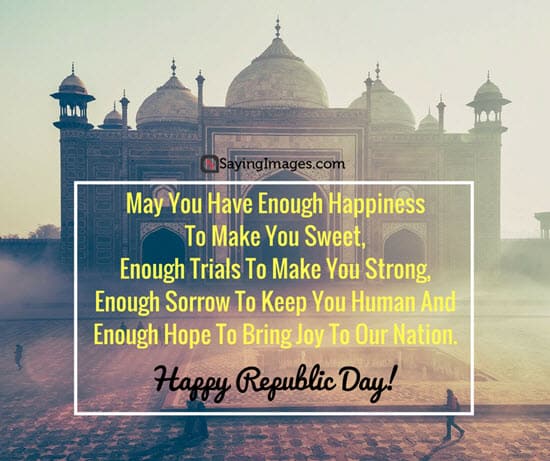 Republic Day Is the Time to Recall
The Famous Vande Mataram
The Chant That Gave Us The Freedom
May The Indian Spirit Prosper Forever
To Remember Is To Cherish
Let Us Remember and Chant Vande Mataram!

Let Us Pray For
The Prosperity and Unity of Our Country
On this Republic Day
As We Remember Those Who Fought
to Give Us the Freedom
Vande Mataram! 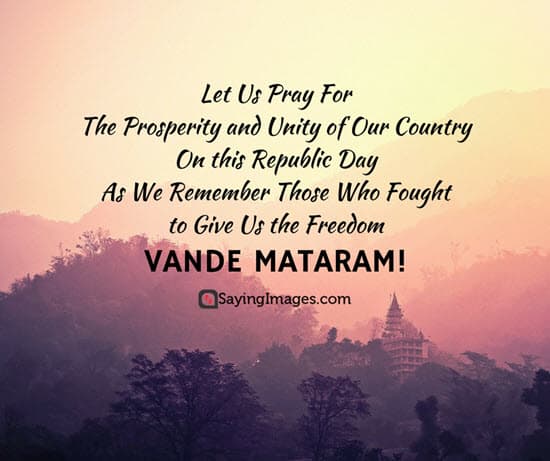 Even As We Celebrate This Memorable Day
In The History Of Our Mother Nation,
Let Us Keep Checking On Our Underprivileged
Brothers And Sisters On The Streets;
Let Us Show The Beauty Of This Nation
To Everyone Regardless Of Social,
Economic Or Financial Background.
Happy Republic Day!

The Almighty In The Most High Grants
Liberty Only To Those Who Love It,
And Are Always Ready To Defend It
Happy Republic Day! 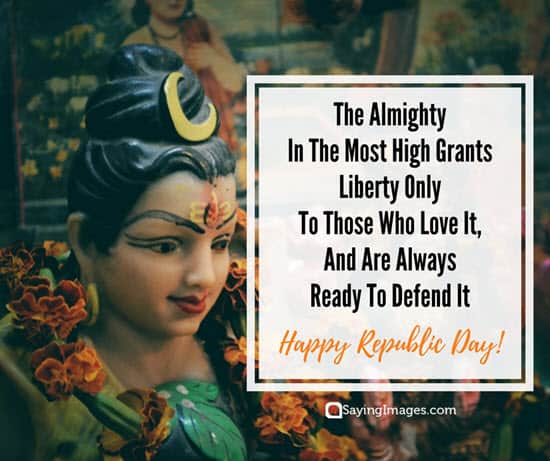 May The Brightest Star
In Its Course
Visit No Land More Free,
Happier, More Lovely,
Than This Our Own Land.
My Best Wishes To You
On This Republic Day! 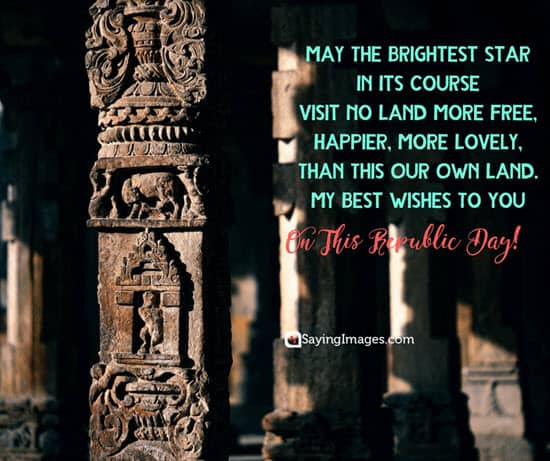 The Far We Have As A Nation,
The Endless Problems,
And The Struggle For Justice,
Freedom And Equal Rights
For Every Patriot Calls For Love,
Peace And Unity Among The Citizens Of This Nation.
Happy Republic Day! 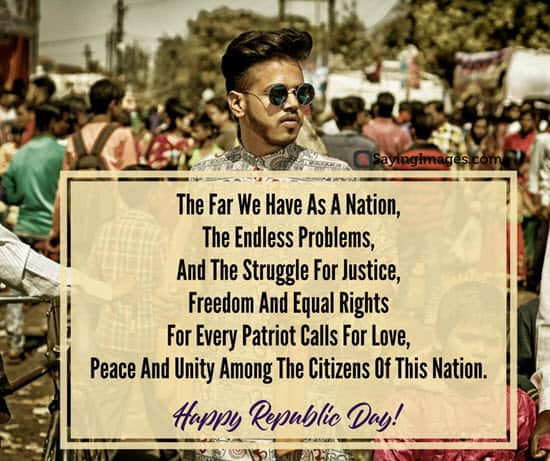 Recalling and Rejoicing
In the Victory of Our Freedom Fighters
on This Republic Day
Best Wishes to All
Vande Mataram!

Rejoice In the Glory of India
and Its Freedom Fighters
on This Republic Day
We Wish You All
A Happy Republic Day Vande Mataram! 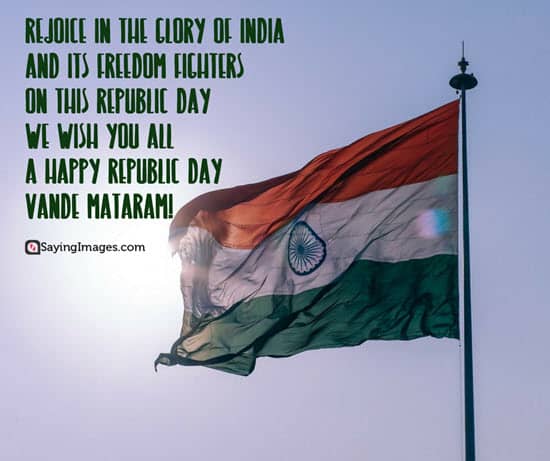 All May There Be Peace and Prosperity
and May We Rejoice In the Blessings
that Our Country Has Given Us
Happy Best Republic Day Wishes to All! 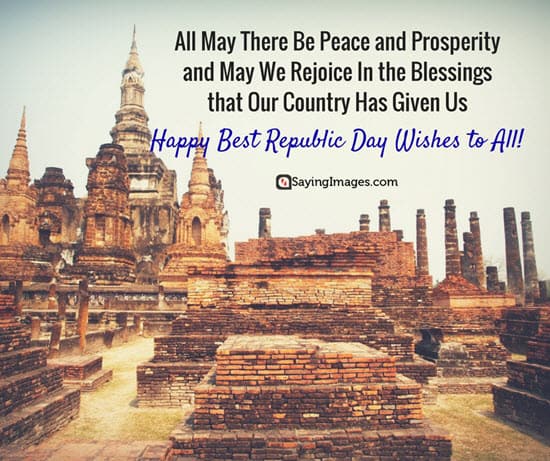