Stan Lee was Stanley Martin Lieber in real life. He was an icon in the comic book industry with multiple awards for his achievements. Through his vision and hard work, he was able to grow Marvel Comics from a small publishing house to the giant it now is.

Stan Lee was most remembered for his own works like the much-loved Spiderman, the Hulk, Doctor Strange, DareDevil, Iron Man, X-Men, the Fantastic Four, and so many more. He created superheroes who were flawed and “human” with their own daily struggles in life.

Before his rise in the comic book industry though, he started out filling out inkwells, getting the artists’ lunches, and erasing pencil marks from finished pages. How can one man create and achieve so much? Find out from these Stan Lee quotes.

All I thought about when I wrote my stories was, “I hope that these comic books would sell so I can keep my job and continue to pay the rent.” Never in a million years could I have imagined that it would turn into what it has evolved into nowadays. Never. – Stan Lee

Comic books to me are fairy tales for grown-ups. – Stan Lee 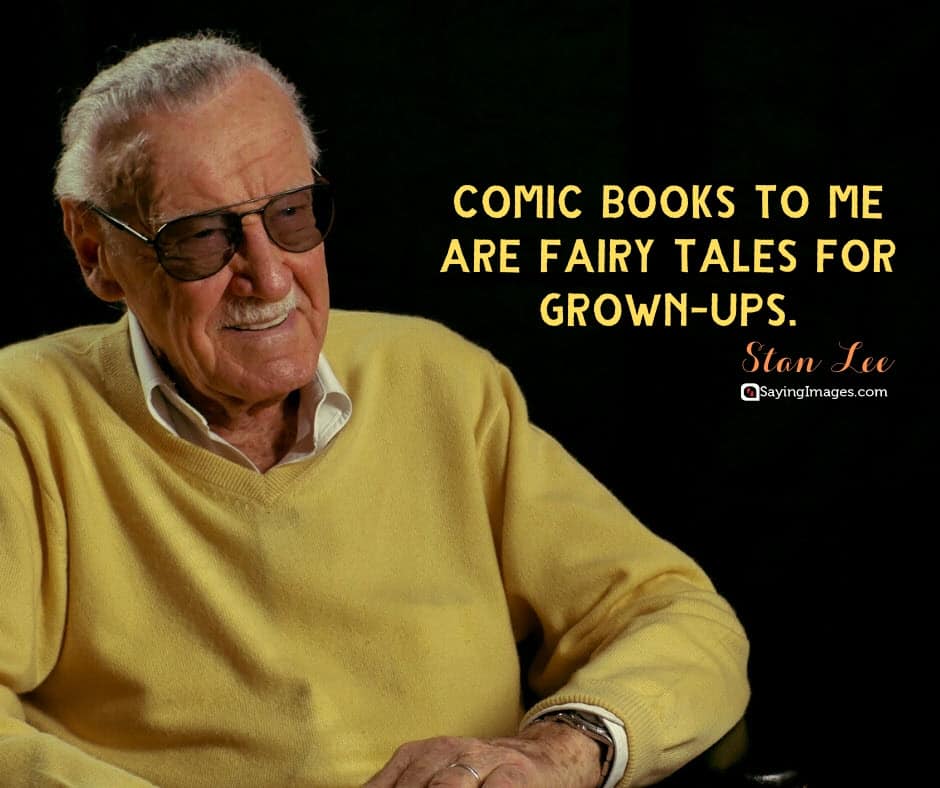 Marvel is a cornucopia of fantasy, a wild idea, a swashbuckling attitude, an escape from the humdrum and prosaic. It’s a serendipitous feast for the mind, the eye, and the imagination, a literate celebration of unbridled creativity, coupled with a touch of rebellion and an insolent desire to spit in the eye of the dragon. – Stan Lee

Life is never completely without its challenges. – Stan Lee 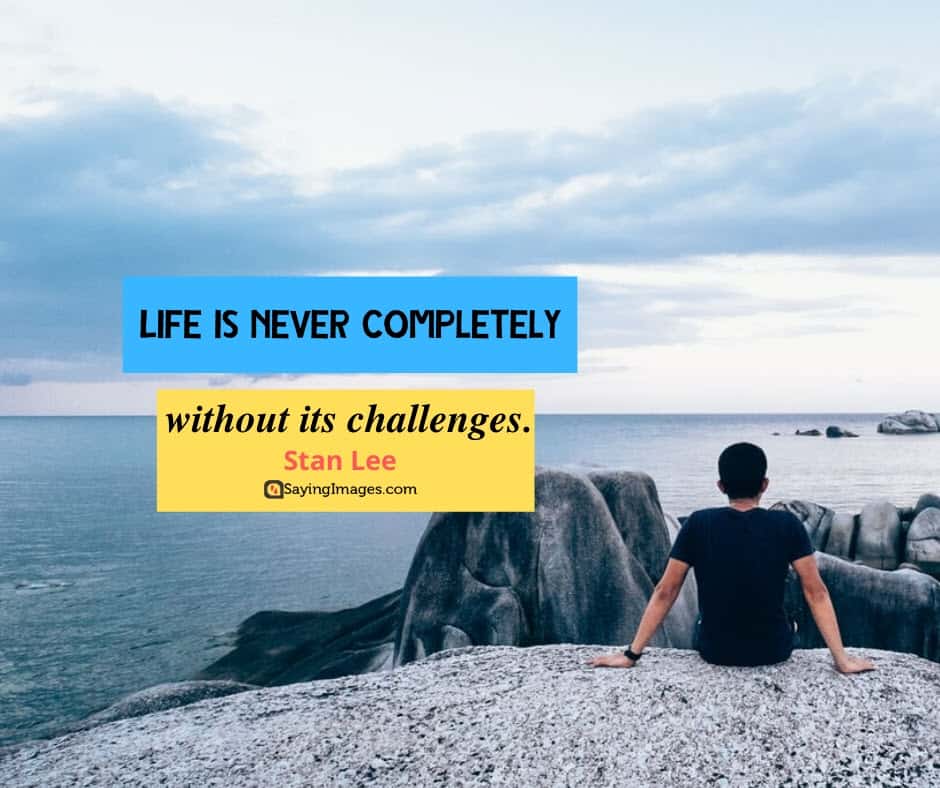 Comics are stories; they’re like novels or anything else. So the first thing you have to do is become a good storyteller. – Stan Lee

If you are interested in what you do, that keeps you going! – Stan Lee 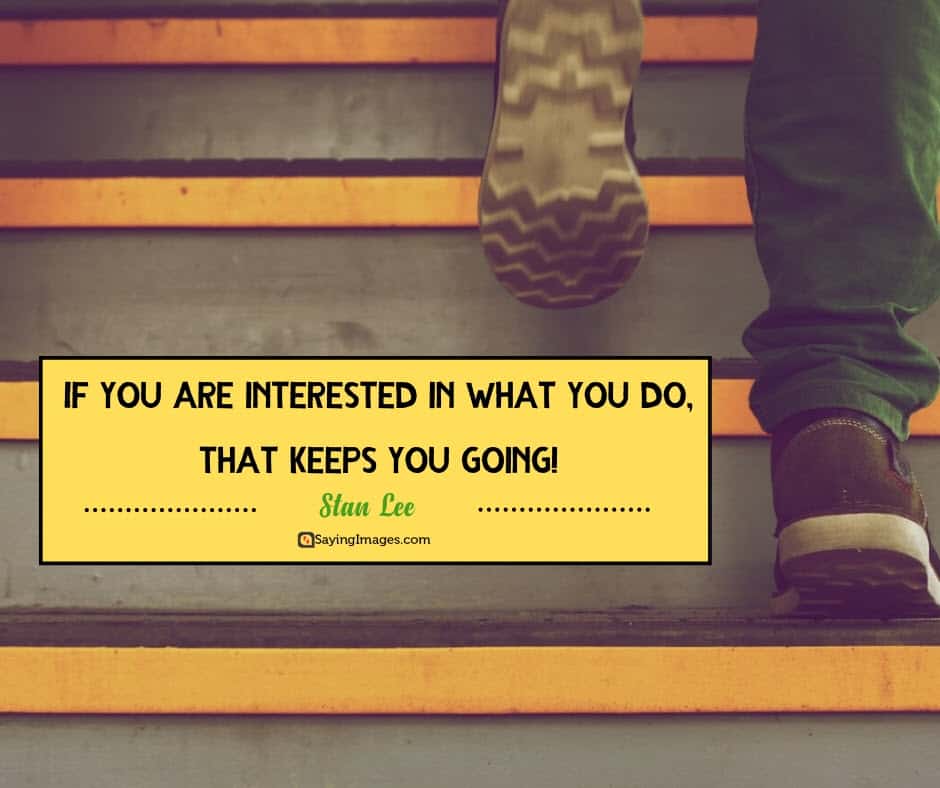 I think almost everybody enjoyed fairy tales when they were young, tales of witches and ogres and monsters and dragons and so forth. You get a little bit older, you can’t read fairy tales anymore. – Stan Lee 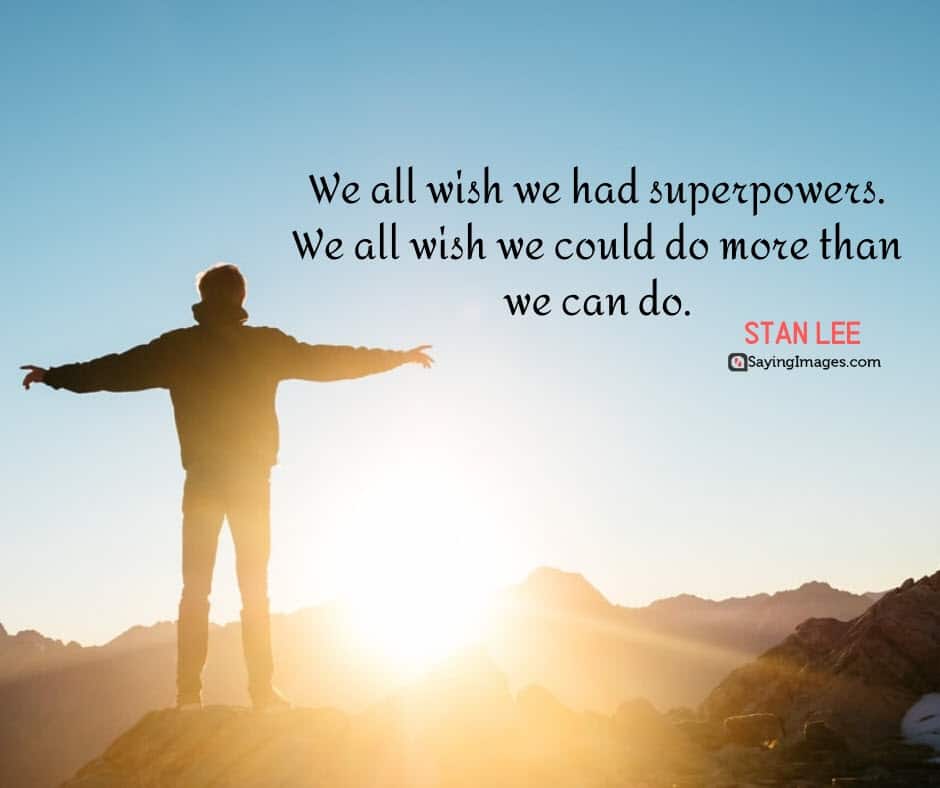 I don’t wake up in the morning and say, wow I’ve got a great idea for a story. But I sit down, and I figure well, let’s see. – Stan Lee

I wanted them to be diverse. The whole underlying principle of the X-Men was to try to be an anti-bigotry story to show there’s good in every person. – Stan Lee 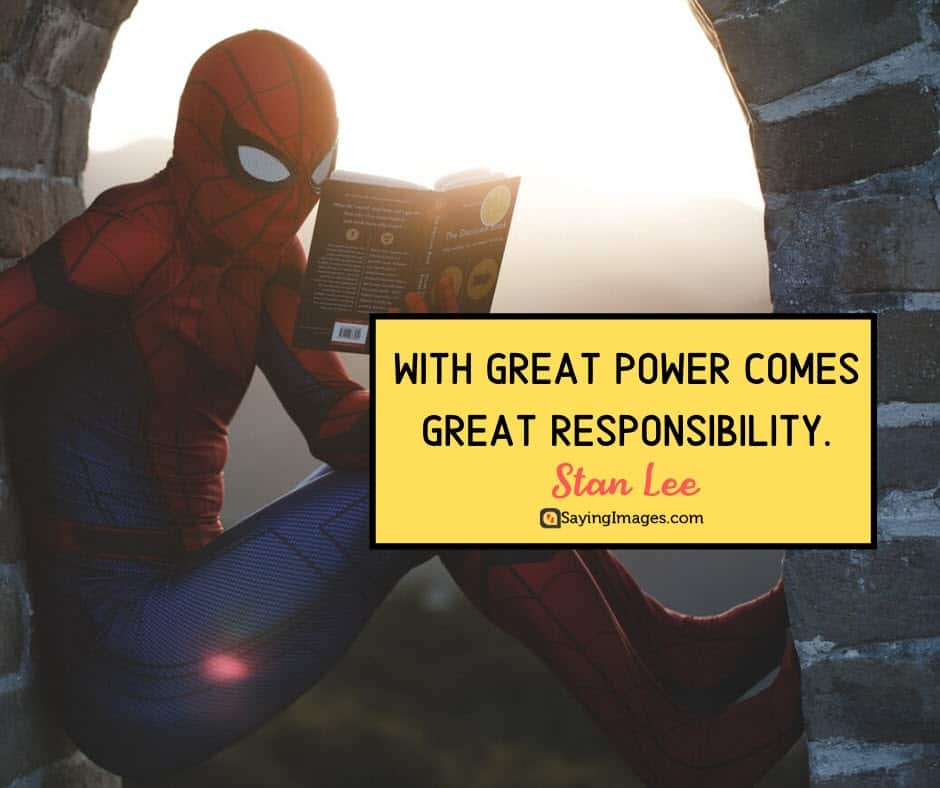 Reading is very good. And you can quote me! – Stan Lee 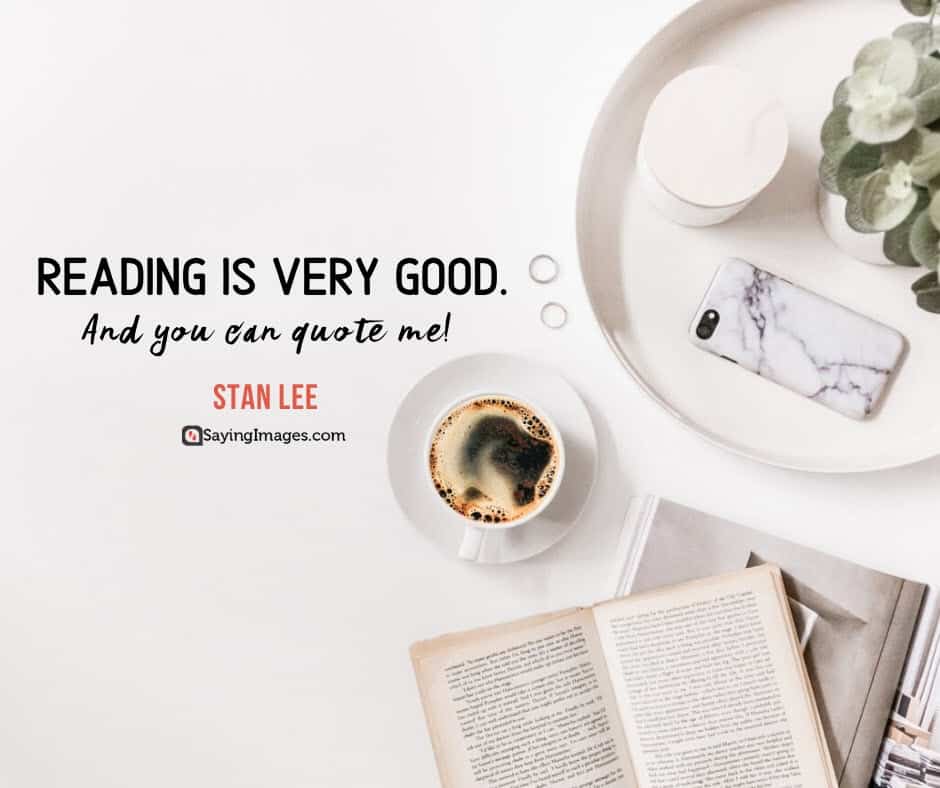 Some people will say, “Why read a comic book? It stifles the imagination. If you read a novel you imagine what people are like. If you read a comic, it’s showing you.” The only answer I can give is, “You can read a Shakespeare play, but does that mean you wouldn’t want to see it on the stage? – Stan Lee

When I was a kid, I loved reading Sherlock Holmes. Now, you don’t think of him as a superhero, but he was so damn much smarter than anybody else. – Stan Lee

I’m happiest when I’m working. If I’m not working, I feel like I’m wasting my time. – Stan Lee 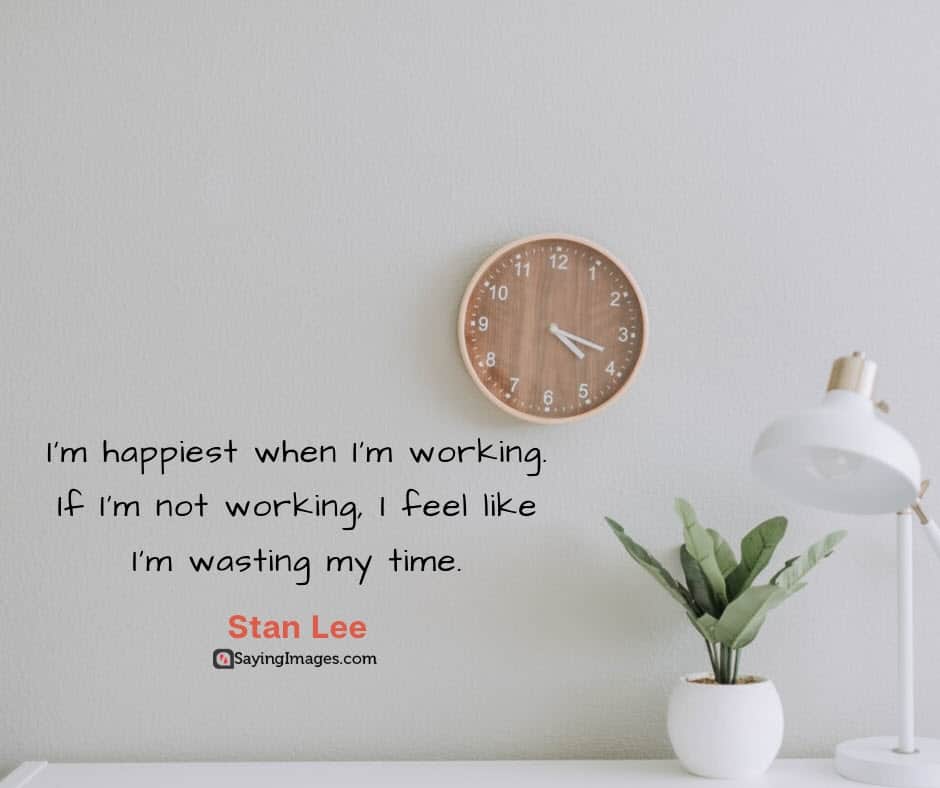 Just because you have superpowers, that doesn’t mean your love life would be perfect. I don’t think superpowers automatically mean there won’t be any personality problems, family problems or even money problems. I just tried to write characters who are human beings who also have superpowers. – Stan Lee

The more you read, the better you’re going to become as a storyteller. – Stan Lee 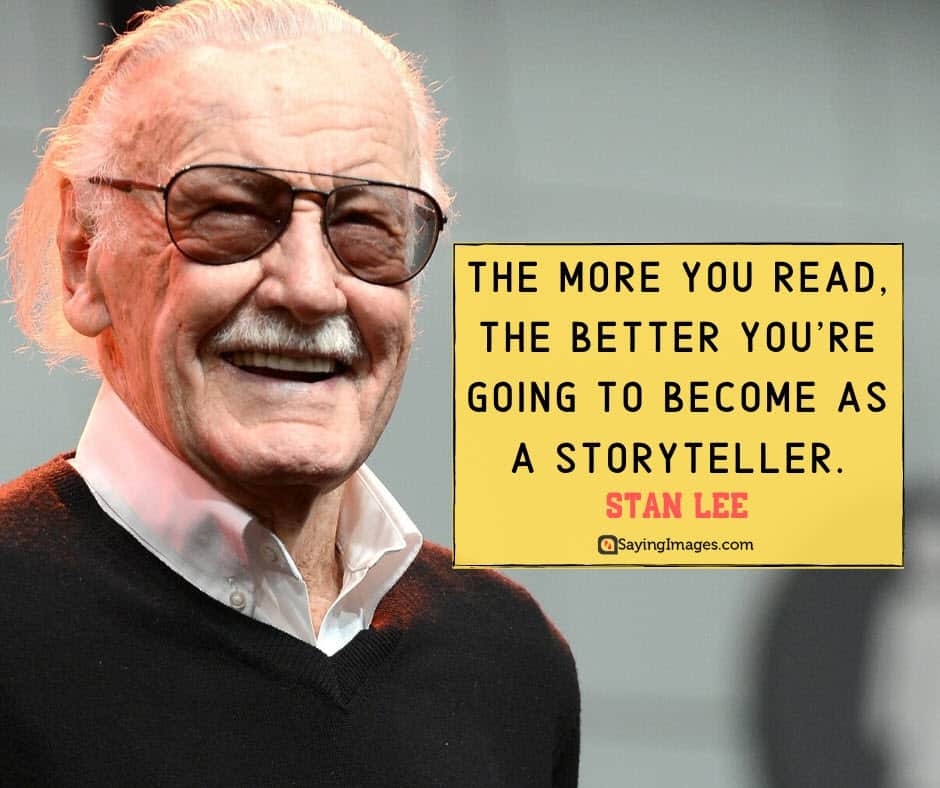 I never thought that Spider-Man would become the worldwide icon that he is. I just hoped the books would sell and I’d keep my job. – Stan Lee

The only time I go on the set is when I have a cameo to do in the picture. I go to the set and I do my little cameo and I meet all the people. It’s a great way to spend the day. And then I go back to my own world. – Stan Lee

No one has a perfect life. Everybody has something that he wishes was not the way it is. – Stan Lee 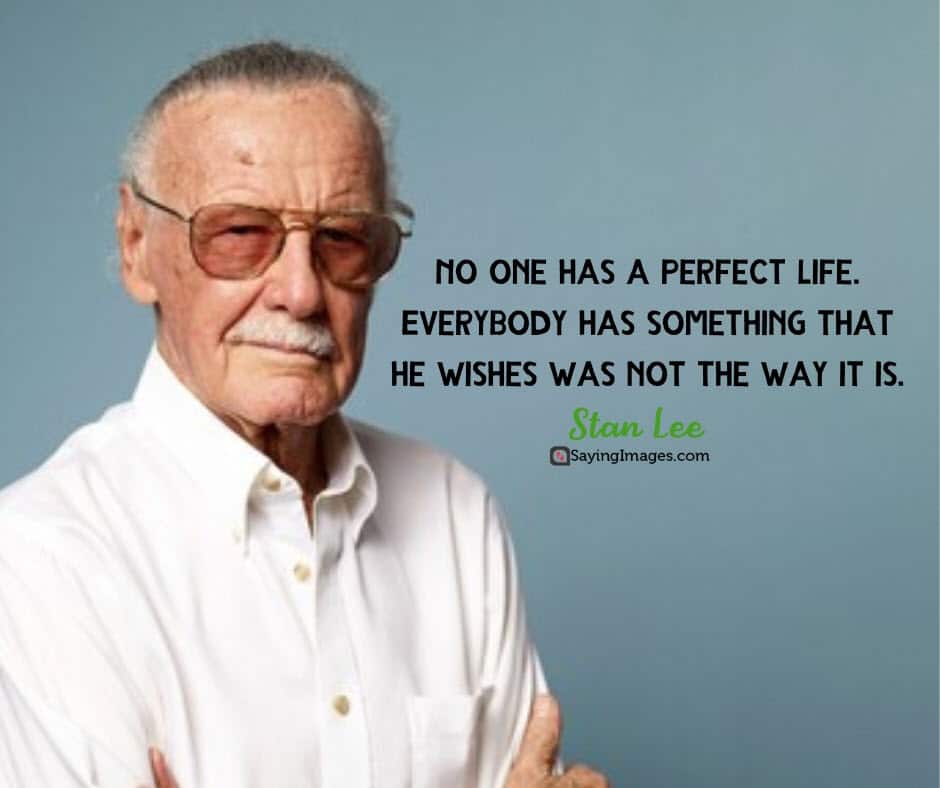 If there are people who like the work you’ve done, because of that, they like you and want your autograph and to take a photo, that’s really gratifying. You have to be appreciative. – Stan Lee

Most people say, “I can’t wait to retire so I can play golf,” or go yachting or whatever they do. Well, if I was playing golf, I would want that to finish so I could go and dream up a new TV show. – Stan Lee

I don’t really see a need to retire as long as I am having fun. – Stan Lee 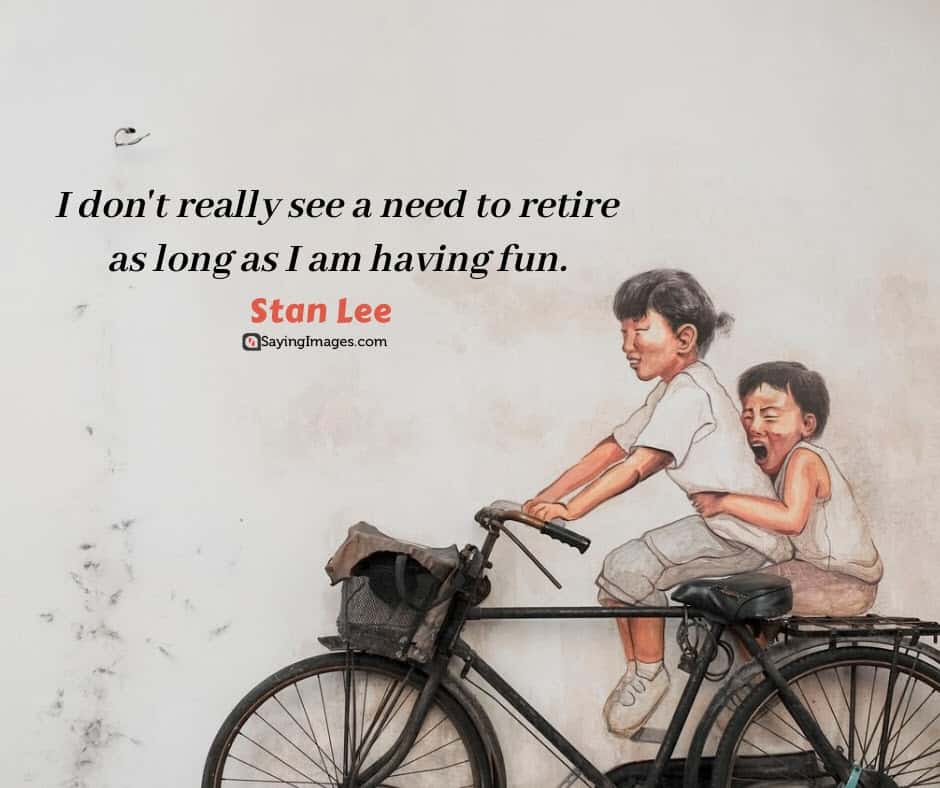 I’m very proud of being a hack. It’s why I’ve lived as long as I have, I think. – Stan Lee

These stories of people with unusual powers and unusual appearances, who do unusual things, people are always fascinated by them. – Stan Lee

If I got a superpower I wouldn’t say, oh, I got to get a costume and put on a mask. I would say hey, I can do something better than other people. How can I turn it into a buck? – Stan Lee 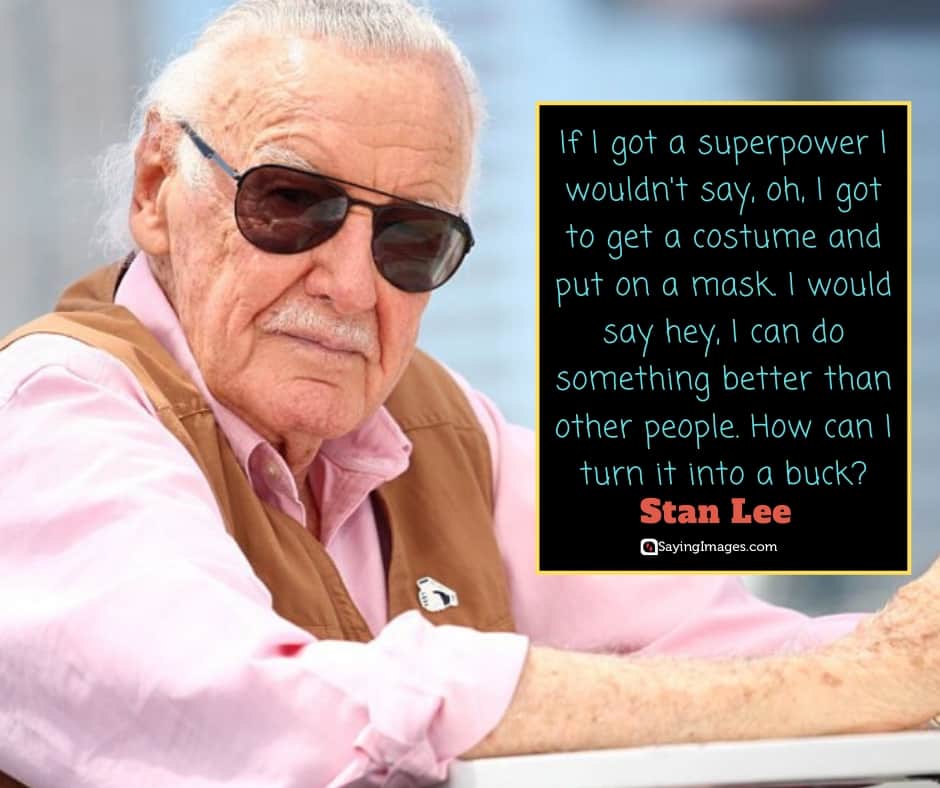 I don’t know where the hell I’ll be in 5 years. Maybe I’ll be producing movies maybe I’ll be on a corner selling apples. I don’t know, but I’m having a hell of a lot of fun. – Stan Lee

Negative information is that which, immediately upon acquiring, causes the recipient to know less than he did before. – Stan Lee 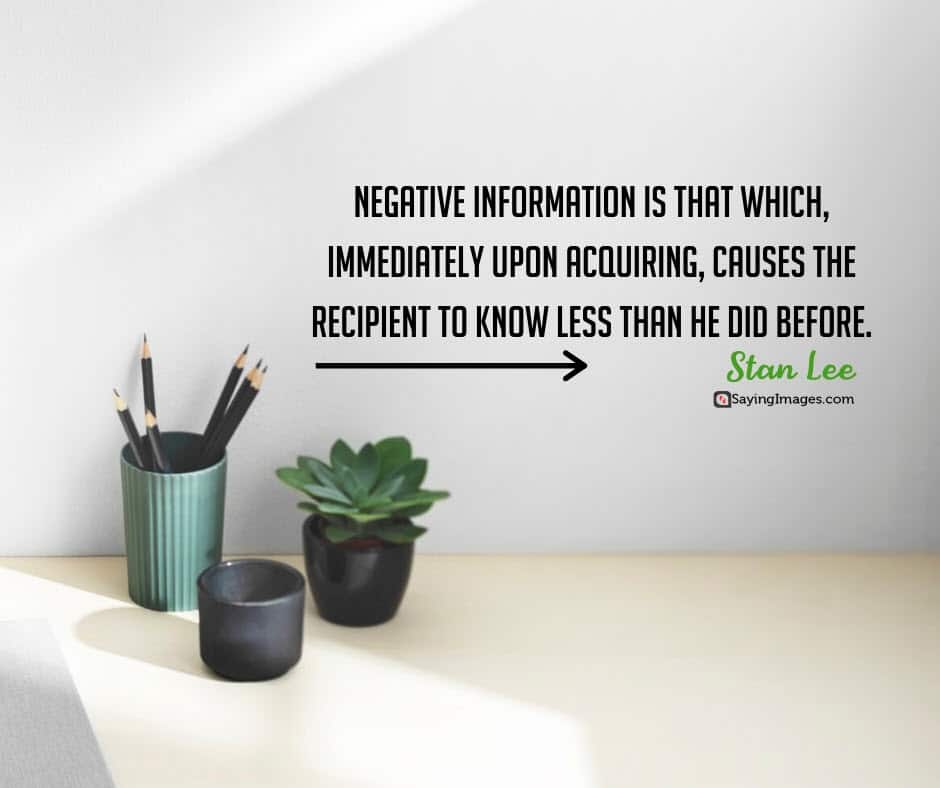 I’ve been very lucky. All I wanted was to pay the rent. Then these characters took off and suddenly there were Hulk coffee mugs and Iron Man lunch boxes and The Avengers sweatshirts everywhere. Money’s okay, but what I really like is working. – Stan Lee

I thought it would be great to do superheroes that have the same kind of life problems that any reader – that anybody could have. – Stan Lee

If you enjoy what you do, if you are interested in what you do, I really think that’s the best situation. – Stan Lee 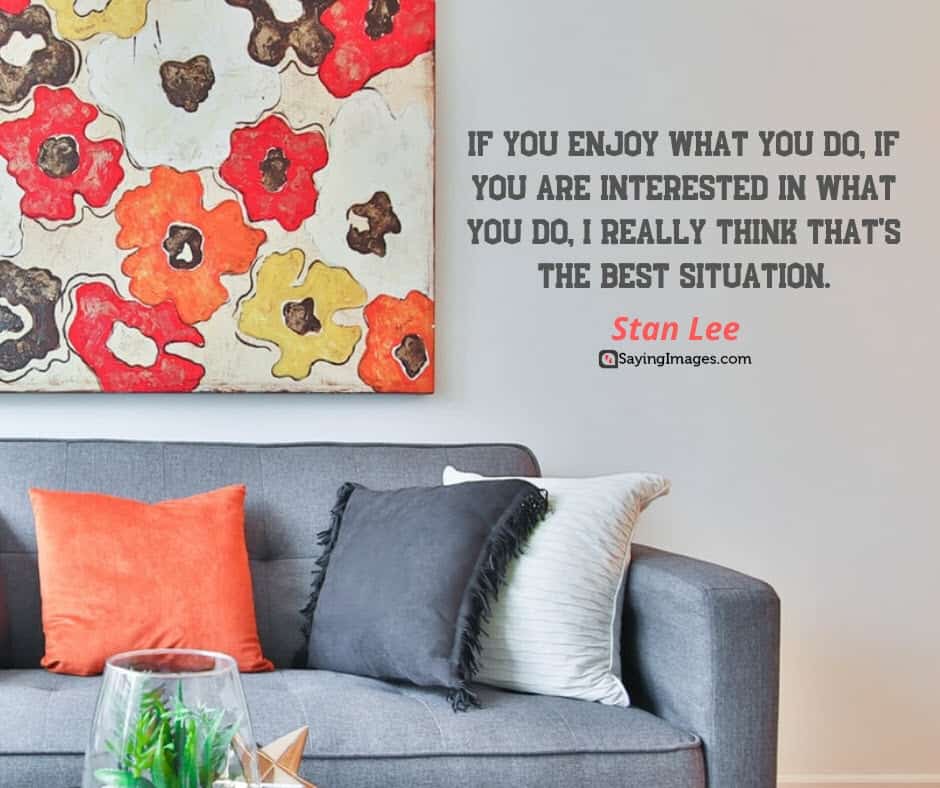 I thought it would be fun to take the kind of character that nobody would like, none of our readers would like, and shove him down their throats and make them like him. – Stan Lee

We’re living in a world where everything moves very quickly. We’ve become a very visual society, so I think it’s a very natural thing that people are captivated with the illustrations in a story. – Stan Lee

There’s just something that feels nice about holding a comic book! – Stan Lee 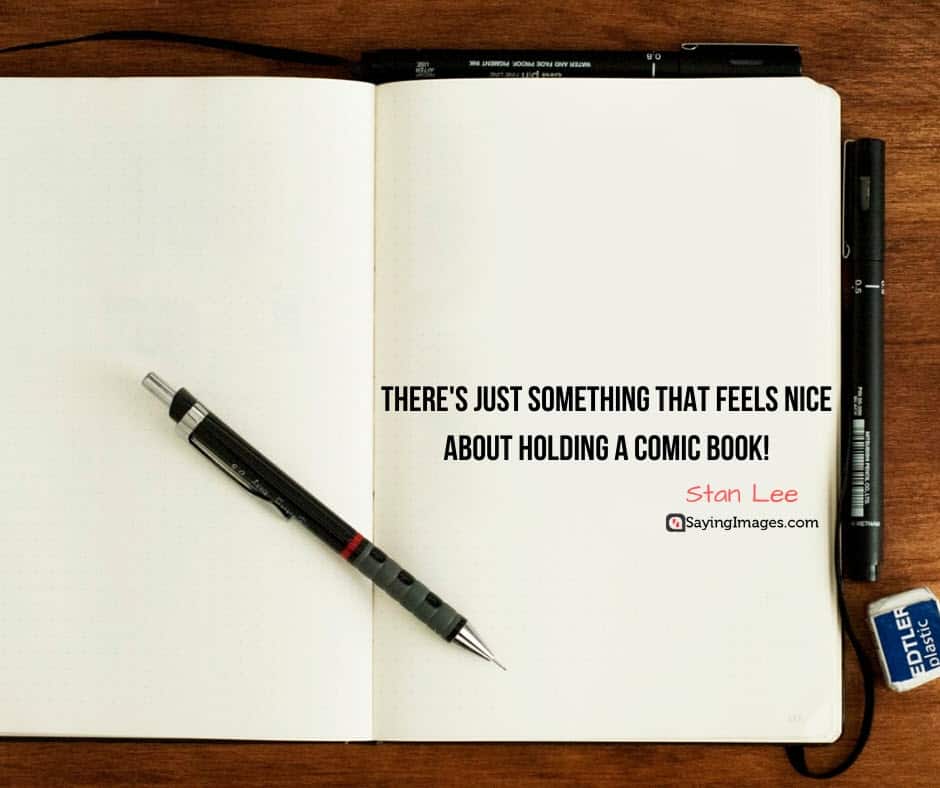 If you wanna be an artist carry sketch pad with you, and sketch everything you see. Get so you can draw anything and it looks like what it’s supposed to be. It’s a lot of work, but if you really have it in you, it’s not like work. It becomes fun. – Stan Lee

Virtually, every kid is exposed to giants and ogres and talking wolves, and so forth. And magic. And I think you never outgrow your love for those imaginative, fanciful, farfetched, fantastic characters and situations. – Stan Lee

I don’t analyse things too closely. I find the more you analyse, the more you get away from spontaneity. – Stan Lee 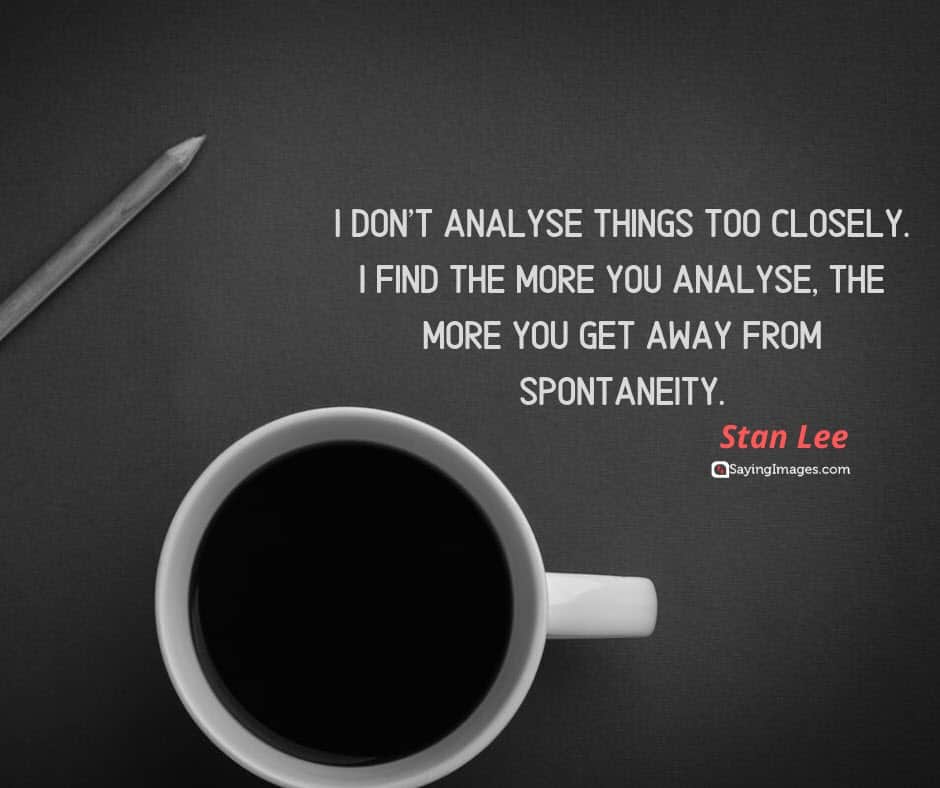 Singing a song, playing sports – anything that entertains, that takes people away from their own problems, is good. – Stan Lee

I’m sort of a pressure writer. If somebody says, “Stan, write something,” and I have to have it by tomorrow morning, I’ll just sit down and I’ll write it. It always seems to come to me. But I’m better doing a rushed job because if it isn’t something that’s due quickly, I won’t work on it until it becomes almost an emergency and then I’ll do it. – Stan Lee

The world has always been like a comic book world to me! – Stan Lee 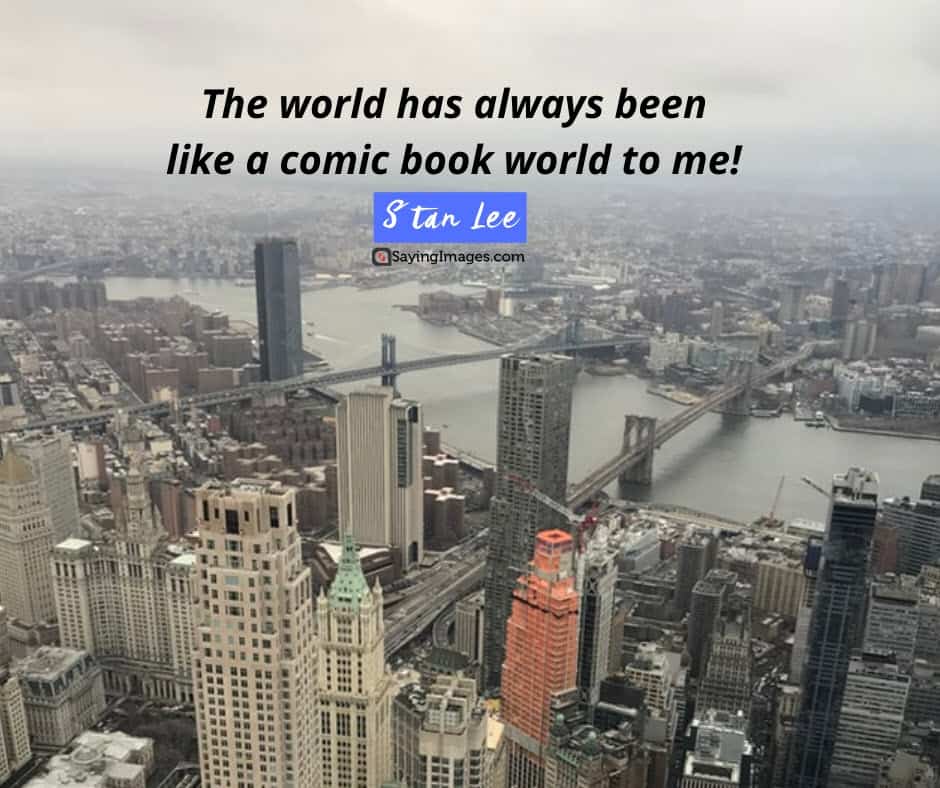 Once you get the script, you then hope you can get the director that you want. Then you hope he can get the cast he wants. Again, you can go quickly or there can be a million stumbling blocks. There’s just no way to know. – Stan Lee

If you’re writing about a character, if he’s a powerful character, unless you give him vulnerability I don’t think he’ll be as interesting to the reader. – Stan Lee

I don’t think you ever outgrow your love for things that are bigger than life and more colorful than the average life. And somehow I feel that these comic book stories are like fairy tales for older people, because they have the same qualities. – Stan Lee 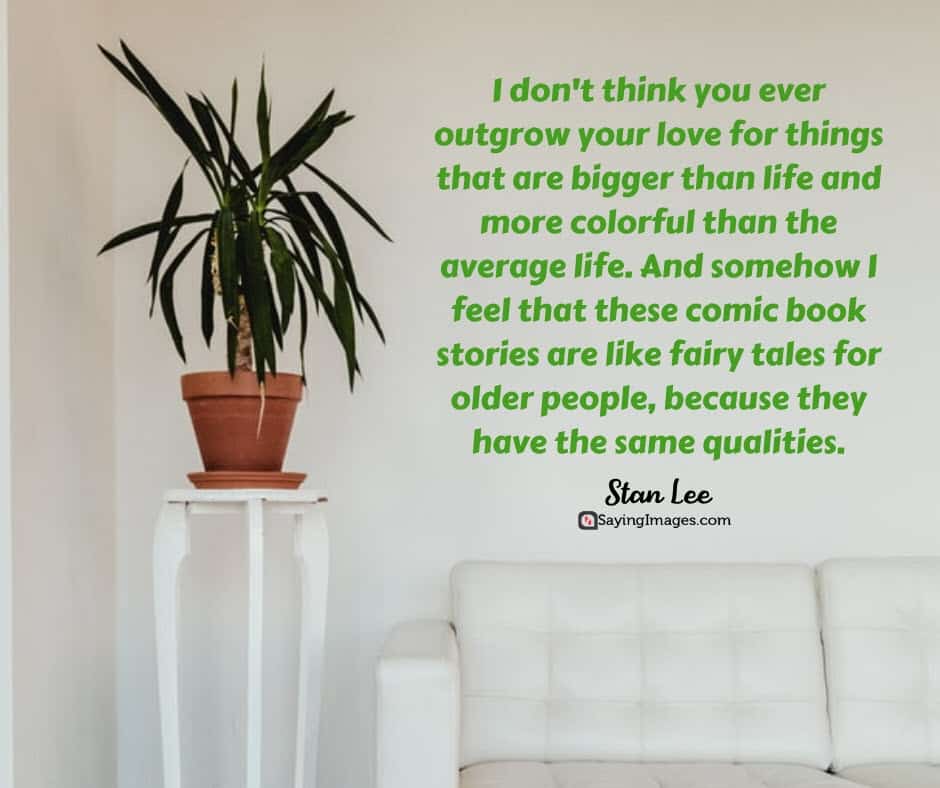 I enjoyed reading Batman, and Superman, and all the super ones, but I never wished I created them. I’ve got to let there be some work for other people! – Stan Lee

See Also: 20 Batman Quotes: The Knight Is Dark But At Least There’s Payback

Every day, there’s a new development. There’s no limit to the things that are happening. – Stan Lee

The power of prayer is still the greatest ever known in this endless eternal universe. – Stan Lee 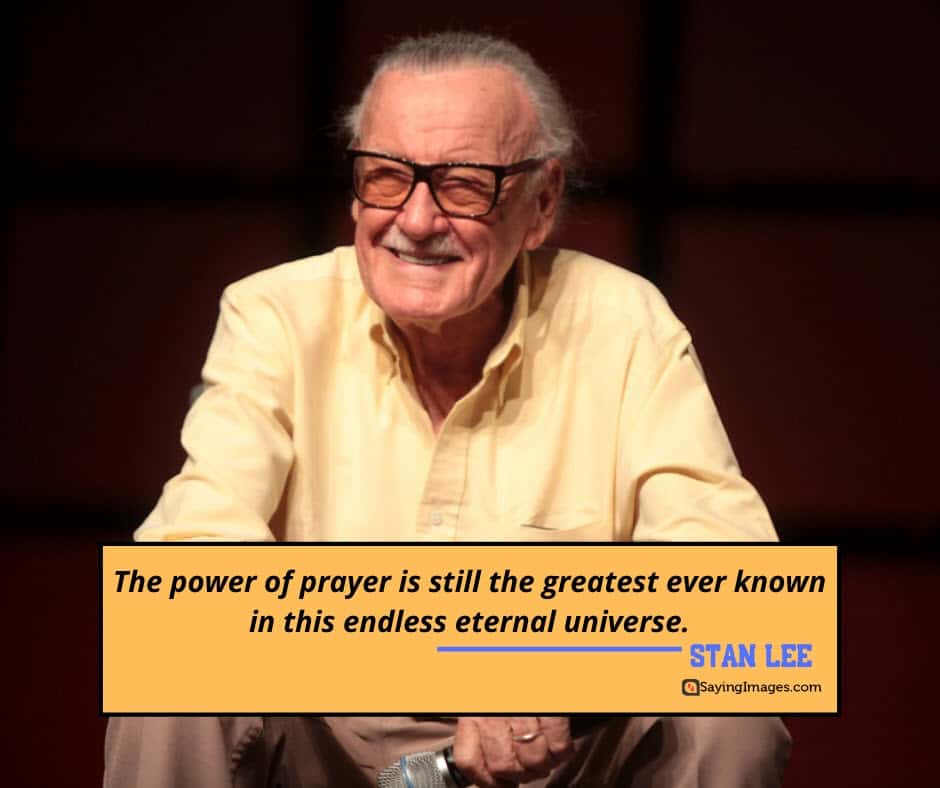 When you combine the great stories from the comics with the action and visual excitement of the movies, it doesn’t get any better! – Stan Lee

To tell you the truth, I never thought of myself as much of a success. – Stan Lee

I think superheroes are bigger than life and they’re very colorful. – Stan Lee 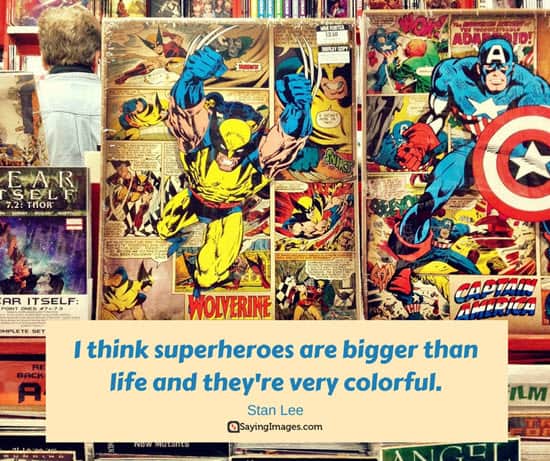 I’m just working with ideas in my head and with drawings that the artists did. And suddenly to see these things come to life in movies – it’s just wonderful. – Stan Lee

I see myself in everything I write. All the good guys are me. – Stan Lee

I think the way you become a good storyteller is to read a lot of stories and evaluate them in your own mind. – Stan Lee 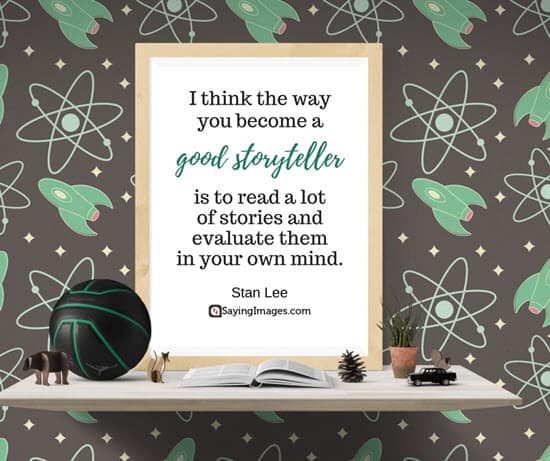 Technology isn’t a villain. Technology should help, but if you just use the technology for the sake of technology, then you’re cheating your audience. You’re not giving them the best story and the best direction and so forth. – Stan Lee

No matter what you write, it’s a matter of putting words in a certain order so that the reader will be interested in what you’re writing. – Stan Lee

To me, writing is fun. It doesn’t matter what you’re writing, as long as you can tell a story. – Stan Lee 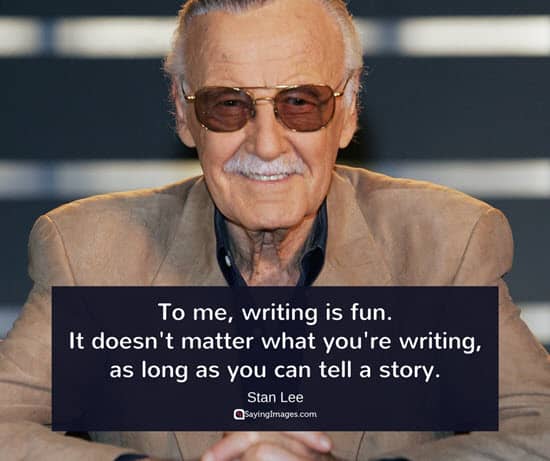 I always figure I’m not unique, and something that would please me hopefully would please a lot of other people that have the same tastes that I do. – Stan Lee

Luck is one of the most important things in the world and really has a role to play in everything, and in marriage, I’ve been lucky enough to be married to the same girl for all these years. – Stan Lee 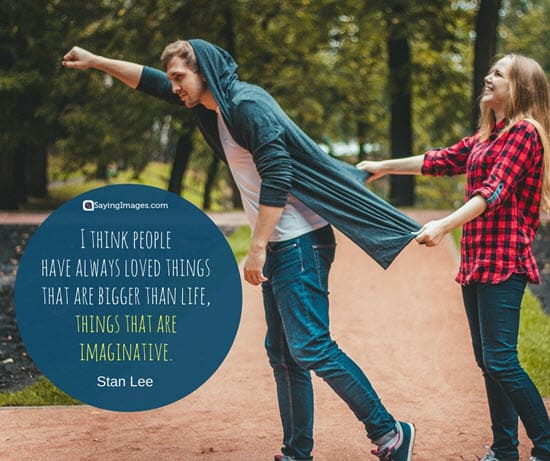 The only advice anybody can give is, if you wanna be a writer, keep writing. And read all you can, read everything. – Stan Lee 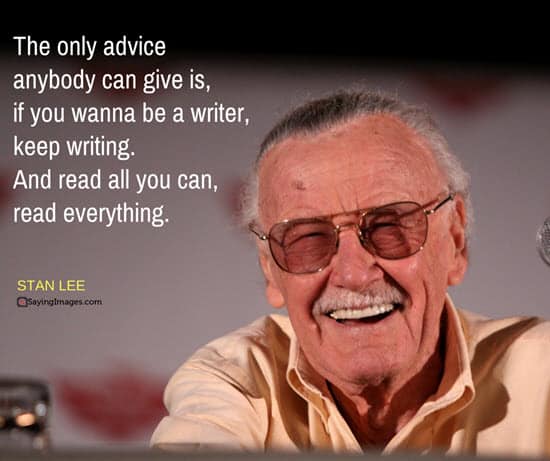 I used to be embarrassed because I was just a comic-book writer while other people were building bridges or going on to medical careers. And then I began to realize: entertainment is one of the most important things in people’s lives. Without it, they might go off the deep end. I feel that if you’re able to entertain people, you’re doing a good thing. – Stan Lee

Don’t forget to share these Stan Lee quotes to inspire others to work hard, pursue their passion, and love what they do.