We now live in a world where nearly all ailments have remedies. Every symptom, every discomfort alleviated at a stroke of a pen, literally, when doctors write prescriptions. There’s less pain to be endured to help us focus on living. Medical advancements today have certainly helped mankind in its battle against many diseases, ultimately saving lives.

Thus, it’s only fair to say that modern medicine, despite its flaws and inadequacies, has boosted life-expectancy up to a certain point. That alone is a crucial milestone for humanity. After all, we enjoy life too much that we want to stick around a bit longer.

Of course, it also wouldn’t hurt to eat well, exercise, sleep more, laugh often, and go easy on the brownies, French fries, and the cheeseburger. Medicine has notably improved in its scope and efficiency but it’s no excuse to not take care of yourself.

Here are 30 medical quotes appreciating the wonders of medicine.

Science appears calm and triumphant when it is completed; but science in the process of being done is only contradiction and torment, hope and disappointment. – Meredith Wadman

Medicine is my lawful wife, and literature is my mistress. When I get fed up with one, I spend the night with the other. – Anton Chekhov

We can cure physical diseases with medicine, but the only cure for loneliness, despair, and hopelessness is love. – Mother Teresa 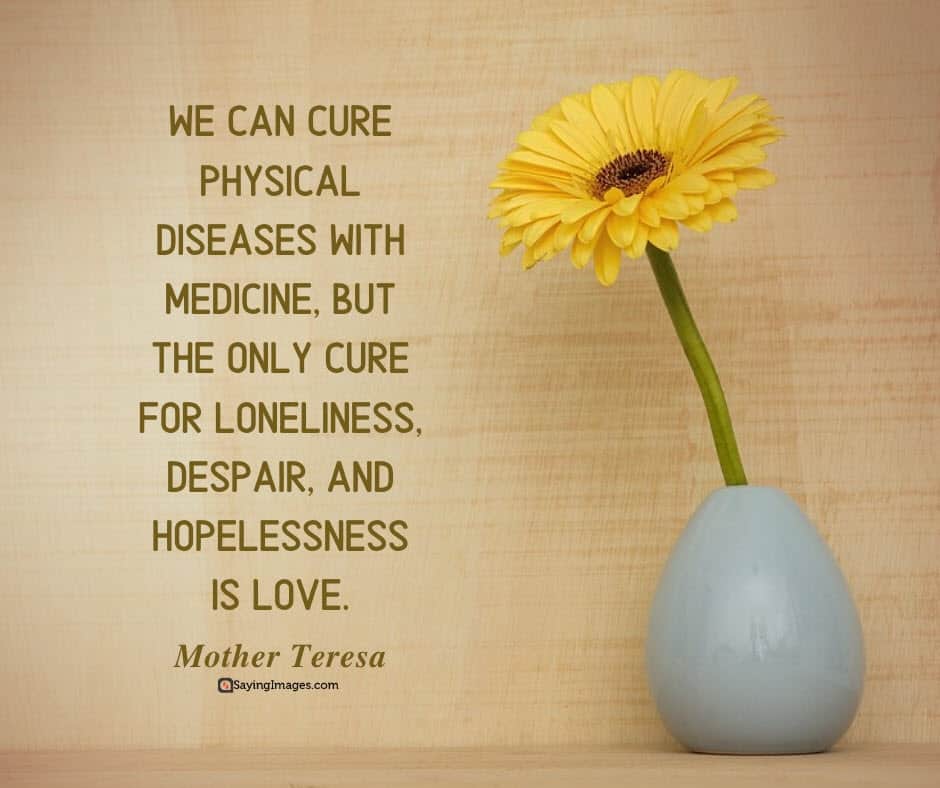 The art of medicine consists of amusing the patient while nature cures the disease. – Voltaire

As to diseases, make a habit of two things — to help, or at least, to do no harm. – Hippocrates 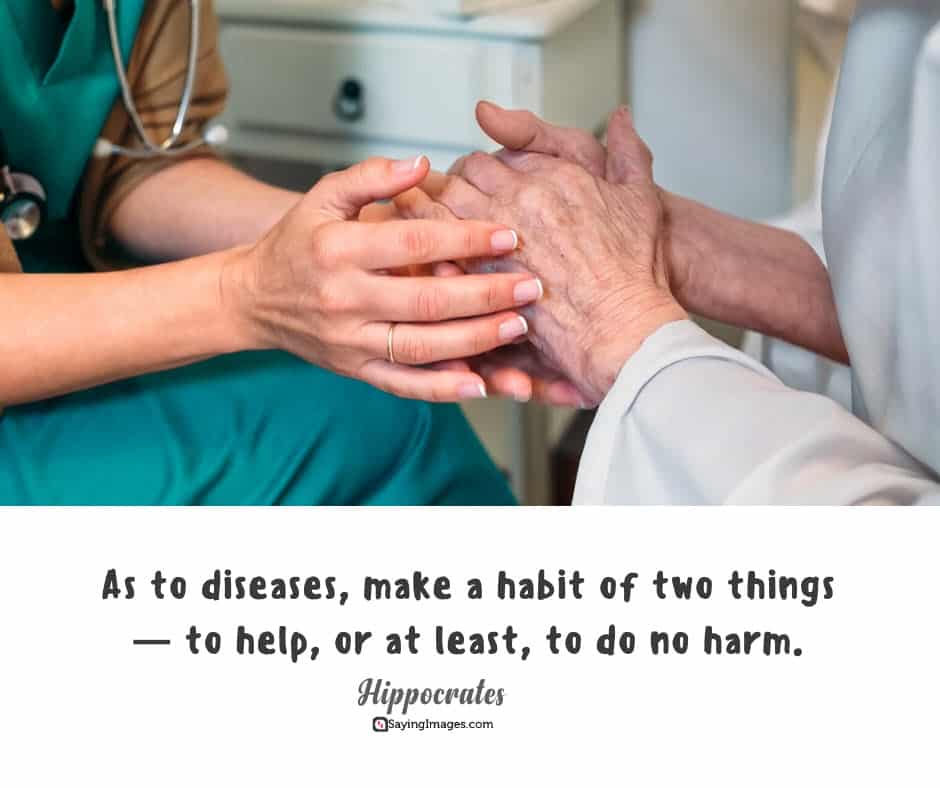 We look for medicine to be an orderly field of knowledge and procedure. But it is not. It is an imperfect science, an enterprise of constantly changing knowledge, uncertain information, fallible individuals, and at the same time lives on the line. – Atul Gawande

Let food be thy medicine and medicine be thy food. – Hippocrates 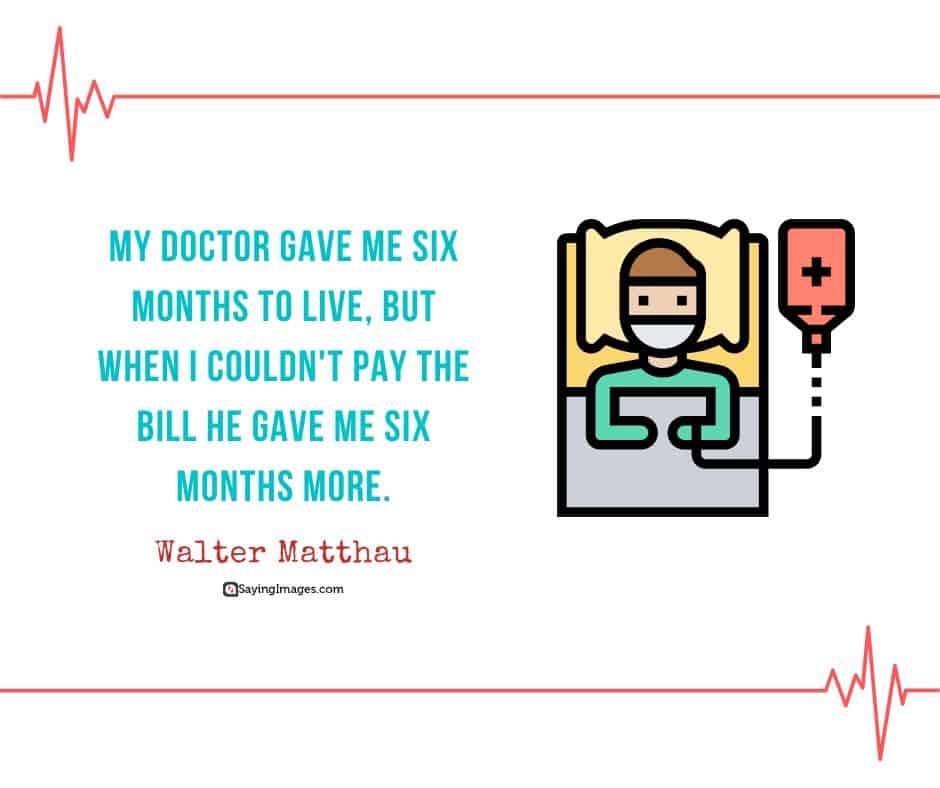 I don’t understand why asking people to eat a well-balanced vegetarian diet is considered drastic, while it is medically conservative to cut people open and put them on cholesterol lowering drugs for the rest of their lives. – Dean Ornish

It’s true that laughter really is cheap medicine. It’s a prescription anyone can afford. And best of all, you can fill it right now. – Steve Goodier 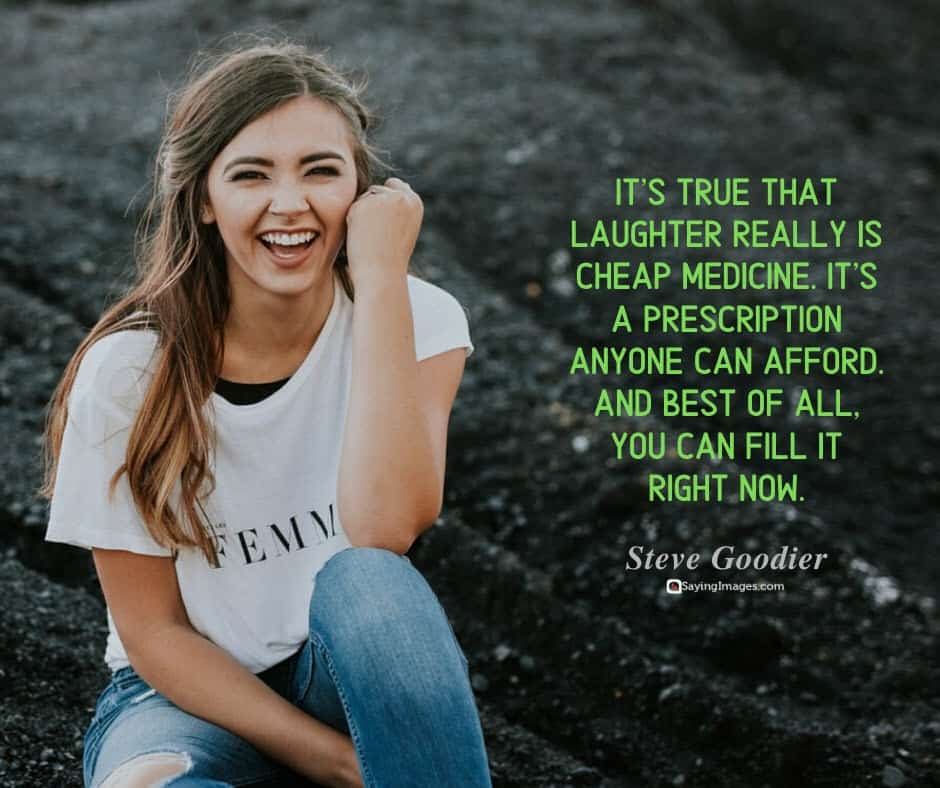 Hospitals should be arranged in such a way as to make being sick an interesting experience. One learns a great deal sometimes from being sick. – Alan Wilson Watts

Disease is the biggest money maker in our economy. – John H. Tobe

Isn’t it a bit unnerving that doctors call what they do “practice”? – George Carlin 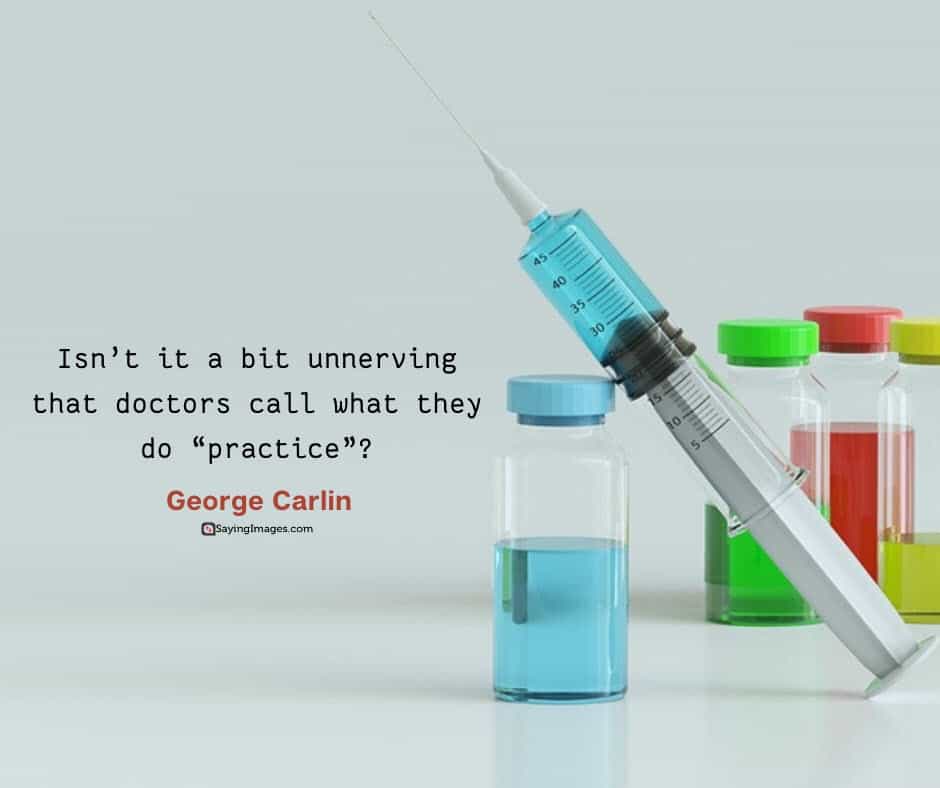 When we give government the power to make medical decisions for us, we in essence accept that the state owns our bodies. – Ron Paul

You are a placebo responder. Your body plays tricks on your mind. You cannot be trusted. – Ben Goldacre

The food you eat can be either the safest and most powerful form of medicine or the slowest form of poison. – Ann Wigmore 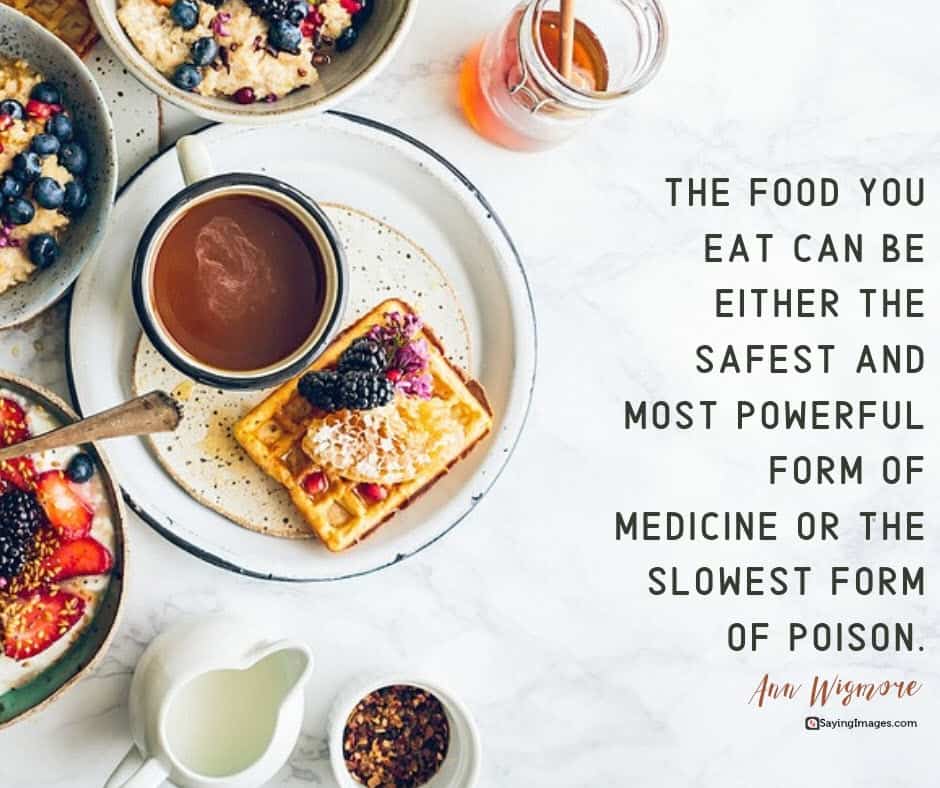 The most exquisite pleasure in the practice of medicine comes from nudging a layman in the direction of terror, then bringing him back to safety again. – Kurt Vonnegut

One dictum I had learned on the battlefields of France in a far distant war: You cannot save the world, but you might save the man in front of you, if you work fast enough. – Diana Gabaldon

Never go to a doctor whose office plants have died. – Erma Bombeck 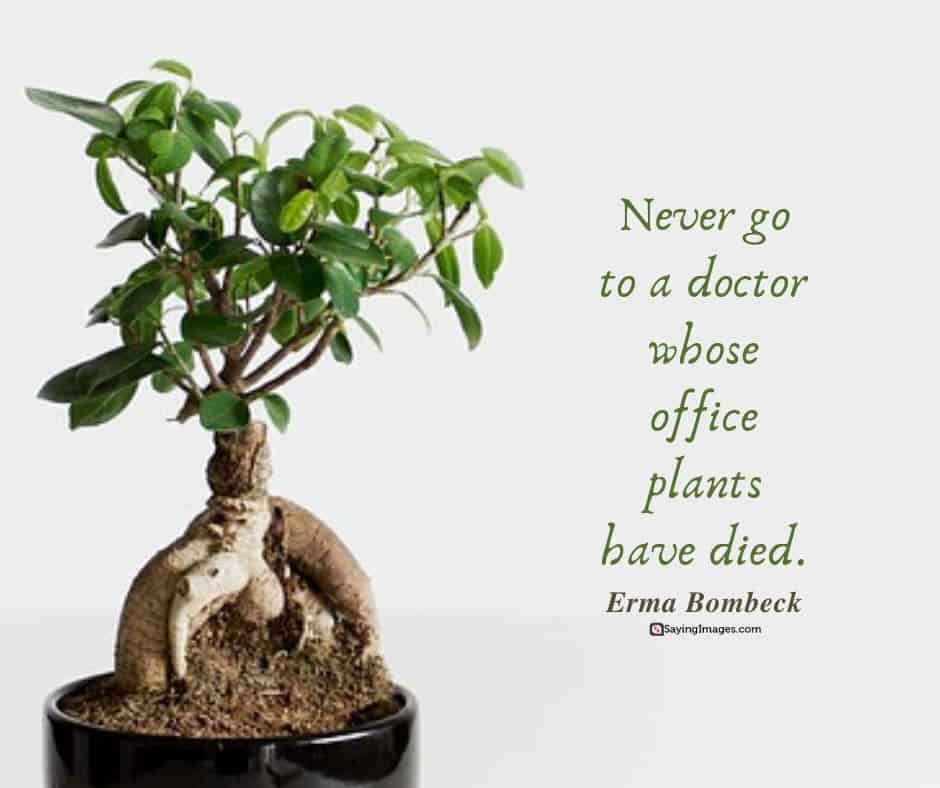 I am diagnosed with not having enough insanely-addictive drugs coursing through my body. – Sarah Silverman

It is hard to look at the tumor and not come away with the feeling that one has encountered a powerful monster in its infancy. – Siddhartha Mukherjee

It is reasonable to expect the doctor to recognize that science may not have all the answers to problems of health and healing. – Norman Cousins 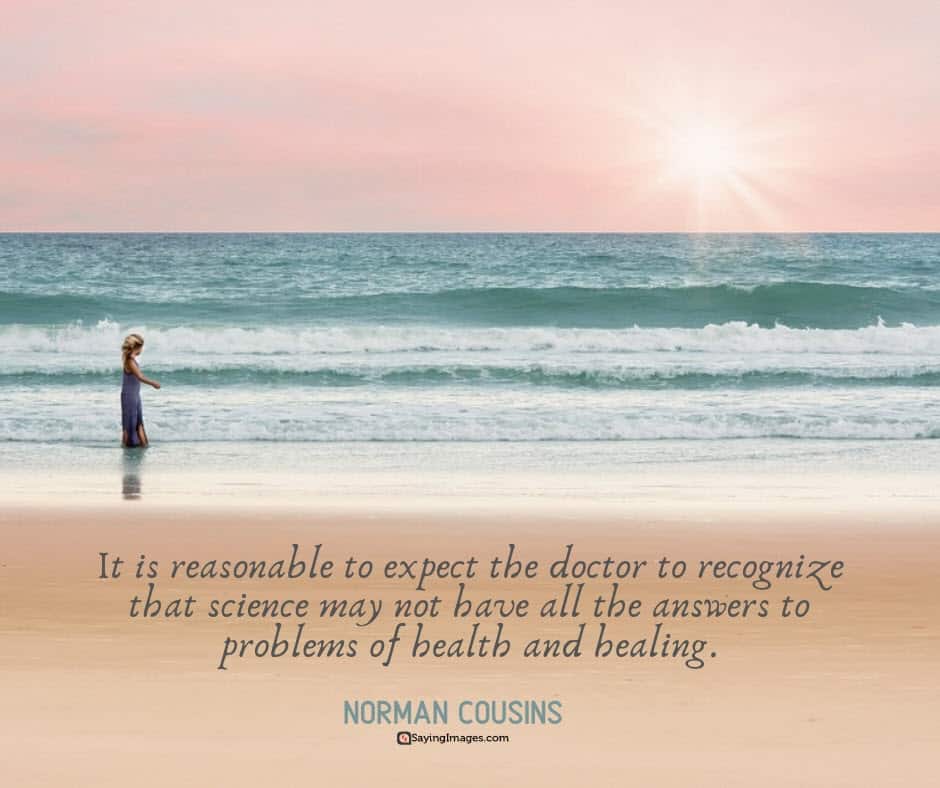 Throughout the history of medicine, including the shamanic healing traditions, the Greek tradition of Asclepius, Aristotle and Hippocrates, and the folk and religious healers, the imagination has been used to diagnose disease. – Jeanne Achterberg

We’d been assured it wouldn’t be painful, though she might experience ‘discomfort,’ a term beloved of the medical profession that seems to be a synonym for agony that isn’t yours. – Lionel Shriver

Believing is half the cure. – Toba Beta 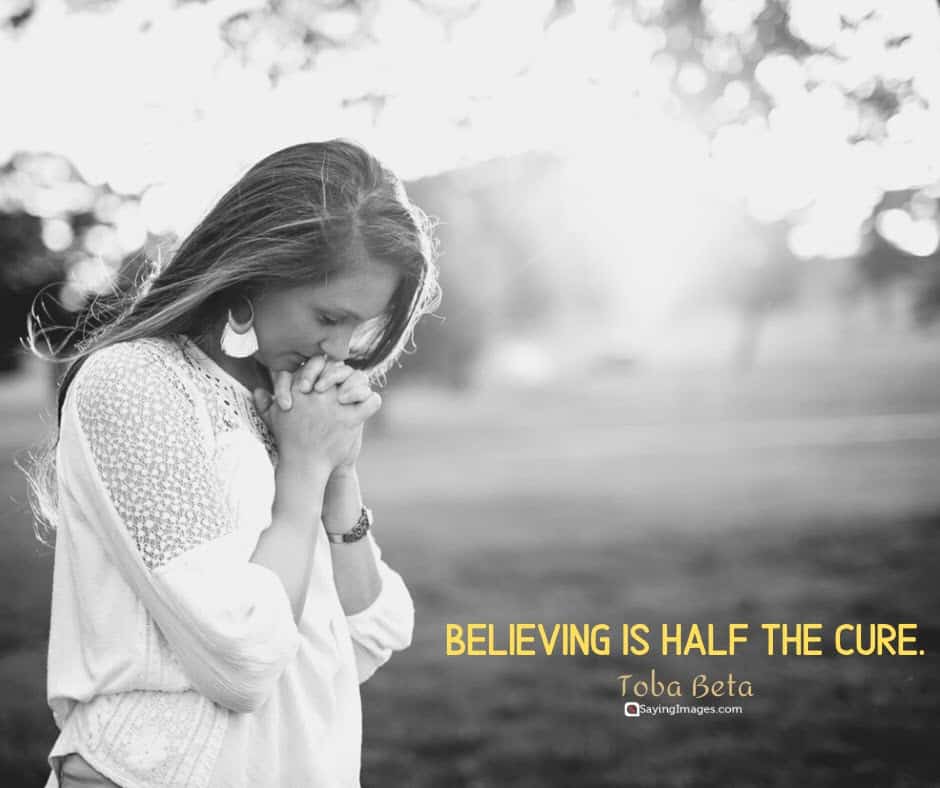 Health and disease are the same thing—vital action intended to preserve, maintain, and protect the body. There is no more reason for treating disease than there is for treating health. – Herbert M. Shelton

Doctors are great–as long as you don’t need them. – Edward E. Rosenbaum 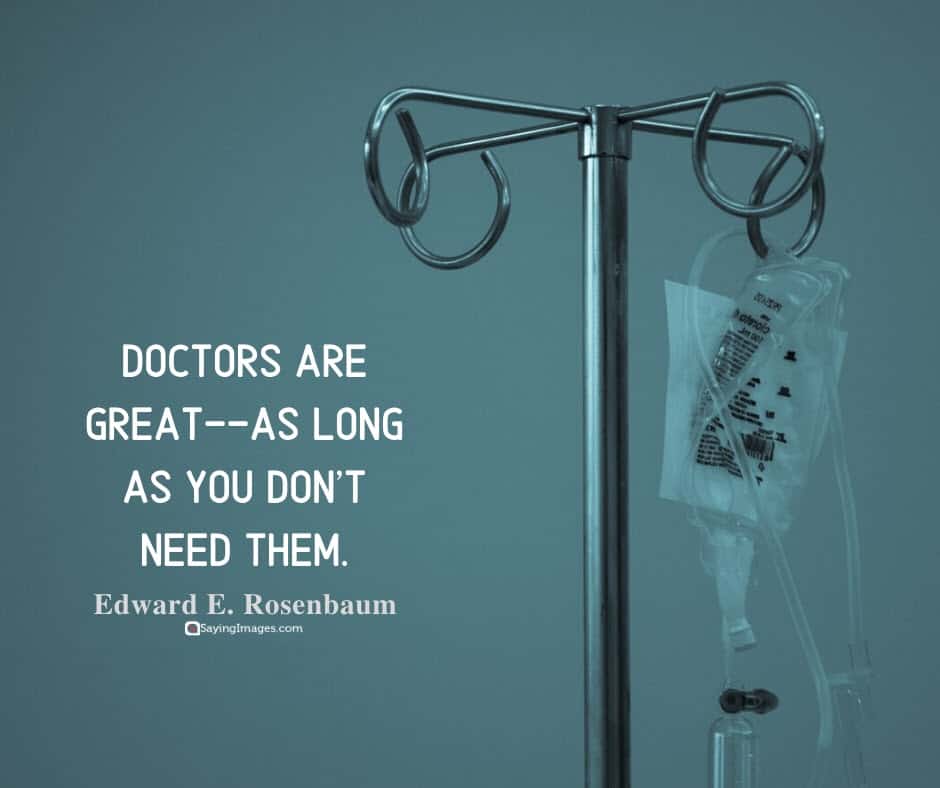 Surely you couldn’t be a good doctor and a terrible human being—surely the laws of man, if not God, didn’t allow it. – Abraham Verghese

Every problem of medicine is a problem of language, and this operation was a malapropism. – William S. Wilson

Share these 30 medical quotes to remind others to take care of themselves.