Born on June 1, 1926, Marilyn Monroe was an actress who rose to fame for her portrayal of comedic blonde bombshell characters. As she played several roles that focused on her sex appeal, she became one of the most famous sex symbols of the 1950s and 1960s.

Originally a brunette, she dyed her hair blonde during her pin-up modeling years, which has since become a huge part of her signature look. Her venture into acting proved to be a game-changer, transforming her into one of Hollywood’s iconic figures.

Initially, she was only given short-lived contracts and small parts until she secured supporting roles in successful Fox movies, which kickstarted her career. She finally made it big after getting the lead roles in the films Niagara and Gentlemen Prefer Blondes.

Typecast for playing blonde bombshell characters and being underpaid, Monroe grew disappointed and sought to change the specifics of her contract. She was suspended as a result, but she returned to star in the box-office hit, The Seven Year Itch.

After the studio declined to grant her more control of her career, she founded her own production company, which led to her getting offered a new and improved contract. From then on Monroe played complex characters, winning a Golden Globe for Some Like It Hot.

Her popularity continued even after her death in 1962. An epitome of ageless beauty and remarkable screen presence, Monroe left a hole in the world of cinema and one that only she could fill. Here are 45 Marilyn Monroe quotes inspiring you to take charge of your life.

Fear is stupid. So are regrets. – Marilyn Monroe

Sex is a part of nature. I go along with nature. – Marilyn Monroe

Imperfection is beauty, madness is genius and it’s better to be absolutely ridiculous than absolutely boring. – Marilyn Monroe

When it comes to gossip, I have to readily admit men are as guilty as women. – Marilyn Monroe

I am trying to find myself. Sometimes that’s not easy. – Marilyn Monroe

I am good, but not an angel. I do sin, but I am not the devil. I am just a small girl in a big world trying to find someone to love. – Marilyn Monroe

I don’t mind living in a man’s world as long as I can be a woman in it. – Marilyn Monroe

Hollywood is a place where they’ll pay you a thousand dollars for a kiss and fifty cents for your soul. – Marilyn Monroe

We human beings are strange creatures and still reserve the right to think for ourselves. – Marilyn Monroe

I restore myself when I’m alone. – Marilyn Monroe

We are all of us stars, and we deserve to twinkle. – Marilyn Monroe

I’m selfish, impatient, and a little insecure. I make mistakes, I’m out of control, and at times hard to handle. But if you can’t handle me at my worst, then you sure as hell don’t deserve me at my best. – Marilyn Monroe

When it comes down to it, I let people think what they want. And if they care enough to bother with what I do, I already know I’m better than them. – Marilyn Monroe

Fame doesn’t fulfill you. It warms you a bit, but that warmth is temporary. – Marilyn Monroe

I’m very definitely a woman and I enjoy it. – Marilyn Monroe

Women who seek to be equal with men lack ambition. – Marilyn Monroe

It’s better to be unhappy alone than unhappy with someone – so far. – Marilyn Monroe

See Also: 30 Unhappy Quotes to Bring Out Your Inner Happiness

She was a girl who knew how to be happy even when she was sad. And that’s important. – Marilyn Monroe

I don’t know who invented high heels, but all women owe him a lot. – Marilyn Monroe

Success makes so many people hate you. I wish it wasn’t that way. It would be wonderful to enjoy success without seeing envy in the eyes of those around you. – Marilyn Monroe

See Also: 40 Best Quotes Ever About Life, Love, And Success

A woman knows by intuition, or instinct, what is best for herself. – Marilyn Monroe

All a girl really wants is for one guy to prove to her that they are not all the same. – Marilyn Monroe

Beauty and femininity are ageless and can’t be contrived, and glamour, although the manufacturers won’t like this, cannot be manufactured. Not real glamour; it’s based on femininity. – Marilyn Monroe

We should all start to live before we get too old. – Marilyn Monroe

No one ever told me I was pretty when I was a little girl. All little girls should be told they’re pretty, even if they aren’t. – Marilyn Monroe

One of the best things that ever happened to me is that I’m a woman. That is the way all females should feel. – Marilyn Monroe

I have feelings too. I am still human. All I want is to be loved, for myself and for my talent. – Marilyn Monroe

If I’d observed all the rules, I’d never have got anywhere. – Marilyn Monroe

I am alone; I am always alone no matter what. – Marilyn Monroe

Just because you fail once, it doesn’t mean you’re going to fail at everything. – Marilyn Monroe

Always, always, always believe in yourself. Because if you don’t then who will, sweetie? – Marilyn Monroe

I am not interested in money. I just want to be wonderful. – Marilyn Monroe

See Also: 31 Engrossing Money Quotes That Will Get Your Priorities Straight

The real lover is the man who can thrill you by kissing your forehead or smiling into your eyes or just staring into space. – Marilyn Monroe

Keep smiling, because life is a beautiful thing and there’s so much to smile about. – Marilyn Monroe 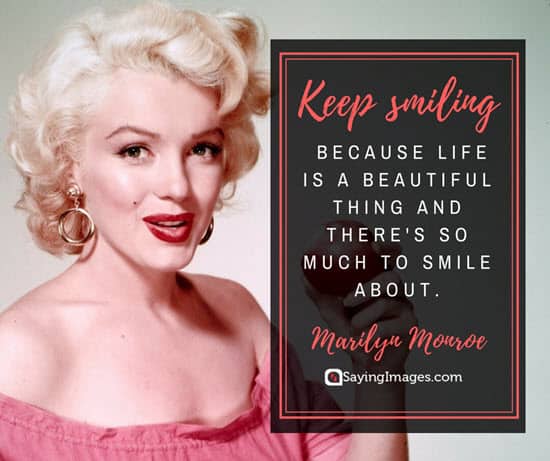 A smart girl leaves before she is left. – Marilyn Monroe

Give a girl the right pair of shoes and she’ll conquer the world. – Marilyn Monroe

The body is meant to be seen, not all covered up. – Marilyn Monroe

Fame is like caviar, you know – it’s good to have caviar but not when you have it at every meal. – Marilyn Monroe

I read poetry to save time. – Marilyn Monroe

I believe that everything happens for a reason. People change so you can learn to let go. Things go wrong so you can appreciate them when they’re right. You believe lies so you eventually learn to trust no one but yourself. And sometimes, good things fall apart, so better things can fall together. – Marilyn Monroe

Share these 45 Marilyn Monroe quotes to celebrate her life and accomplishments.

25 Insurance Memes That We Can Absolutely Relate To