George Washington was called “father of his country” during his lifetime. He was Commander-in-Chief of the Continental Army during the American Revolutionary War and was one of the founding fathers. Unanimously elected in two elections, Washington was admired for his strong leadership and able administration. Choosing the humble title “Mr. President” over other more grandiose names, he was very careful in attending to his duties and responsibilities as President. He was aware that as the first president of the US, he was setting a big precedent for other presidents to follow.

Declining a third election which he would otherwise would have won, he addressed the American People in his farewell address and bade them to cherish the Union, avoid partisanship, and to cement foreign alliances. A man of deep integrity, personal values, and patriotism, he was widely mourned for upon his passing.

Know more about the first president of the United States with these handpicked George Washington quotes.

Guard against the impostures of pretended patriotism. – George Washington

Observe good faith and justice toward all nations. Cultivate peace and harmony with all. – George Washington

It is far better to be alone, than to be in bad company. – George Washington

Mankind, when left to themselves, are unfit for their own government. – George Washington

If freedom of speech is taken away then, dumb and silent we may be led, like sheep to the slaughter. – George Washington

Discipline is the soul of an army. It makes small numbers formidable; procures success to the weak, and esteem to all. – George Washington

Let us raise a standard to which the wise and honest can repair; the rest is in the hands of God. – George Washington

The Constitution is the guide which I never will abandon. – George Washington

If we desire to avoid insult, we must be able to repel it; if we desire to secure peace, one of the most powerful instruments of our rising prosperity, it must be known, that we are at all times ready for War. – George Washington

Let your heart feel for the afflictions and distress of everyone, and let your hand give in proportion to your purse. – George Washington

Truth will ultimately prevail where there is pains to bring it to light. – George Washington

The time is near at hand which must determine whether Americans are to be free men or slaves. – George Washington

When one side only of a story is heard and often repeated, the human mind becomes impressed with it insensibly. – George Washington 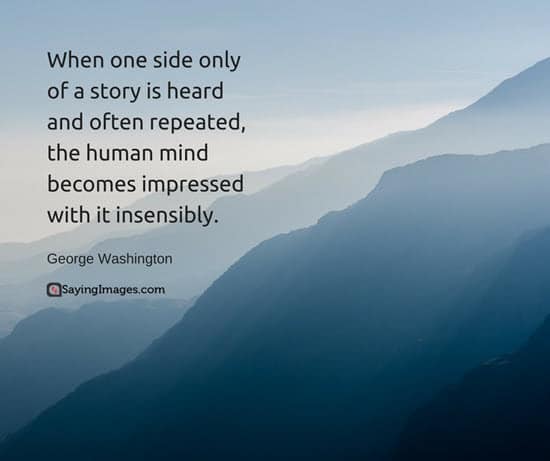 Bad seed is a robbery of the worst kind: for your pocket-book not only suffers by it, but your preparations are lost and a season passes away unimproved. – George Washington

Be courteous to all, but intimate with few, and let those few be well tried before you give them your confidence. – George Washington

Worry is the interest paid by those who borrow trouble. – George Washington

Experience teaches us that it is much easier to prevent an enemy from posting themselves than it is to dislodge them after they have got possession. – George Washington

Friendship is a plant of slow growth and must undergo and withstand the shocks of adversity before it is entitled to the appellation. – George Washington

There can be no greater error than to expect, or calculate, upon real favors from nation to nation. It is an illusion which experience must cure, which a just pride ought to discard. – George Washington

It is better to offer no excuse than a bad one. – George Washington

My mother was the most beautiful woman I ever saw. All I am I owe to my mother. I attribute my success in life to the moral, intellectual and physical education I received from her. – George Washington

99% of failures come from people who make excuses. – George Washington

I hope I shall possess firmness and virtue enough to maintain what I consider the most enviable of all titles, the character of an honest man. – George Washington

Perseverance and spirit have done wonders in all ages. – George Washington

The harder the conflict, the greater the triumph. – George Washington

Share your favorite George Washington quotes with your family and friends.

20 Police Memes That’ll Give You A Good Laugh Today