Fans, welcome to our epic collection of Game of Thrones quotes.

Saying Images shares the most inspiring Game of Thrones quotes & sayings with pictures, and best lines from unforgettable Game of Thrones characters including Tyrion Lannister, Little Finger and Lord Varys.

Game of Thrones is the iconic and popular fantasy TV drama created by David Benioff and D.B. Weiss. It is based off multi-awarded George Raymond Richard Martin’s novel A Song of Ice and Fire first published in 1996. Time magazine named GRRM as one of the “most influential people in the world” in 2011. Not too surprising given the reach and influence of Game of Thrones which has collected a cult following.

As we head off into the finale, celebrate the best memories of the series with these Game of Thrones quotes.

When you play the game of thrones, you win or you die. – Cersei Lannister

It’s not easy being drunk all the time. If it were easy, everyone would do it. – Tyrion Lannister

I will do what queens do, I will rule. – Daenerys Targaryen

Let me tell you something, Bastard. Never forget what you are, the rest of the world will not. Wear it like armor and it can never be used to hurt you. – Tyrion Lannister

Night gathers, and now my watch begins. It shall not end until my death. I shall take no wife, hold no lands, father no children. I shall wear no crowns and win no glory. I shall live and die at my post. I am the sword in the darkness. I am the watcher on the walls. I am the shield that guards the realms of men. I pledge my life and honor to the Night’s Watch, for this night and all the nights to come. ―The Night’s Watch oath

Power resides where men believe it resides. It’s a trick, a shadow on the wall. And a very small man can cast a very large shadow. – Lord Varys

Bastards are born of passion, aren’t they? We don’t despise them in Dorne. – Oberyn Martell

I will take what is mine, with fire and blood! – Daenerys Targaryen

A lion doesn’t concern itself with the opinion of sheep. – Tywin Lannister

In a room sit three great men, a king, a priest, and a rich man. Between them stands a common sellsword. Each great man bids the sellsword slay the other two. Who lives, who dies? Power resides where men believe it resides. It’s a trick, a shadow on the wall, and a very small man can cast a very large shadow. – Lord Varys

I will hurt you for this. A day will come when you think you are safe and happy, and your joy will turn to ashes in your mouth. And you will know the debt is paid. – Tyrion Lannister

You’re no son of mine. – Tywin Lannister

Nothing isn’t better or worse than anything. Nothing is just nothing. – Arya Stark

A dragon is not a slave. – Daenerys Targaryen

The thing we love destroy us every time, lad. Remember that. – Joer Mormont

Hate’s as good a thing as any to keep a person going. Better than most. – Sandor ‘The Hound’ Clegane

What we don’t know is what usually gets us killed. – Petyr Baelish

Chaos isn’t a pit, chaos is a ladder. Only the ladder is real. The climb is all there is. – Petyr Baelish

There is a beast in every man and it stirs when you put a sword in his hand. – Ser Jorah Mormont

I am a Khaleesi of the Dothraki. I am the wife of the great Kahl and I carry his son inside me. The next time you raise a hand to me will be the last time you have hands. – Daenerys Targaryen

Money buys a man’s silence for a time. A bolt in the heart buys it forever. – Petyr “Littlefinger” Baelish

The more people you love, the weaker you are. – Cersei Lannister

All men must die, but we are not men. – Daenerys Targaryen

The gods have no mercy, that’s why they’re gods. – Cersei Lannister

When you tear out a man’s tongue, you are not providing him a liar, you’re only telling the world that you fear what he might say. – Tyrion Lannister

The man who passes the sentence should swing the sword. – Ned Stark

My mind is my weapon. My brother has his sword, King Robert has his warhammer and I have my mind…and a mind needs books as a sword needs a whetstone if it is to keep its edge. That’s why I read so much. – Tyrion Lannister

Never forget what you are, for surely the world will not. Make it your strength. Then it can never be your weakness. Armour yourself in it, and it will never be used to hurt you. – Tyrion Lannister

The things I do for love. – Jaime Lannister

You know nothing, Jon Snow. – Ygritte

Death is so terribly final, while life is full of possibilities. – Tyrion Lannister

A reader lives a thousand live before he dies. The man who doesn’t read lives only one. – Jojen Reed

I’m a monster, as well as a dwarf. You should charge me double. – Tyrion Lannister 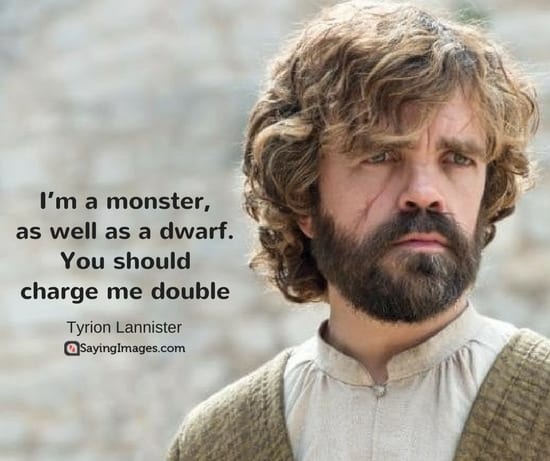 It is a big and beautiful world. Most of us live and die in the same corner where we were born and never get to see any of it. I don’t want to be most of us. – Oberyn Martell

If you ever call me sister again, I’ll have you strangled in your sleep. – Cersei Lannister

For the watch. – Alliser Thorne

Tears aren’t a woman’s weapon. The best one is between your legs. – Cersei Lannister

My mother taught me not to throw stones at cripples… but father taught me: aim for their head! – Ramsay Bolton 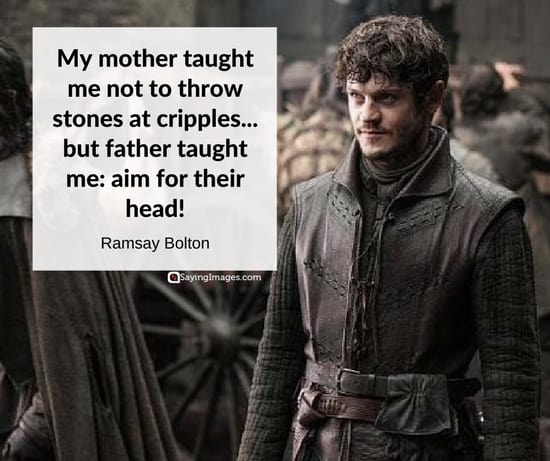 We don’t get to choose whom we love. – Jaime Lannister

I think mothers and father made up the gods because they wanted their children to sleep through the night. – Davos Seaworth 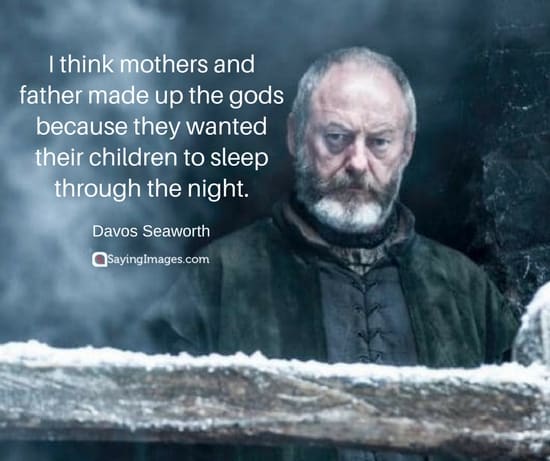 When dead men and worse come hunting… You think it matters who sits on the iron throne? – Jeor Mormont

I learned how to die a long time ago. – Ned Stark 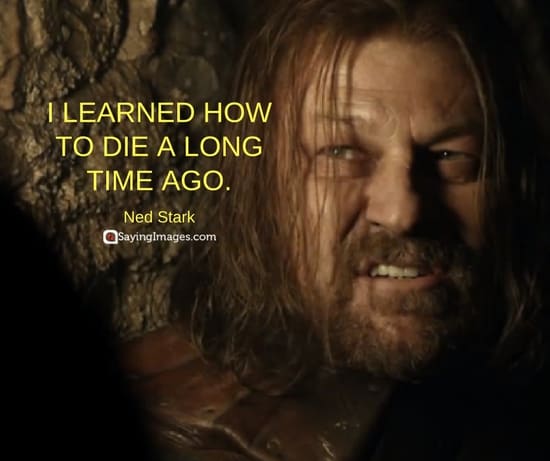 If you think this has a happy ending, you haven’t been paying attention. – Ramsay Bolton 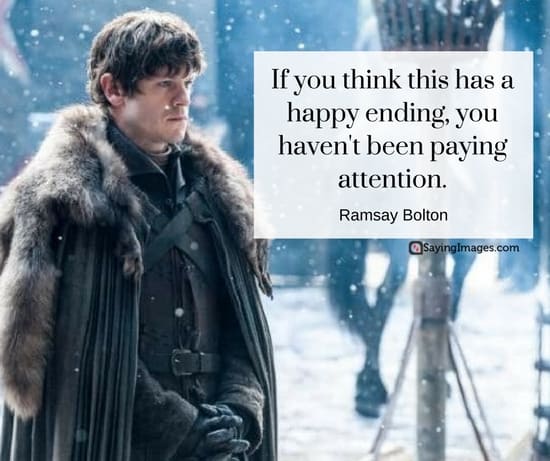 The mad king did as he liked. Has your Uncle Jaime ever told you what happened to him? – Tyrion Lannister 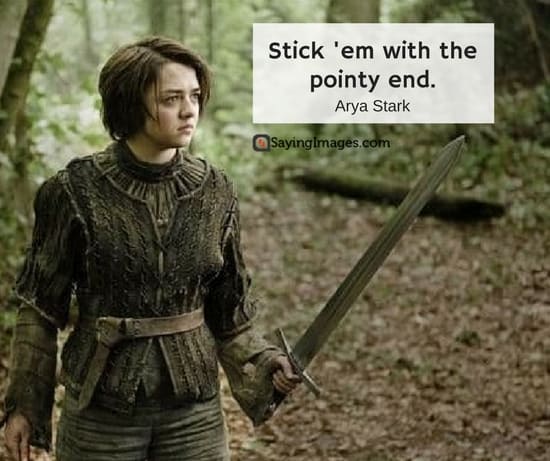 I’m Sansa Stark of Winterfell. This is my home. And you can’t frighten me. – Sansa Stark

This is not the day I die. – Oberyn Martell

A girl gives a man his own name? – Jaqen H’ghar

It is rare to meet a Lannister who shares my enthusiasm for dead Lannisters. – Oberyn Martell

Turn us away, and we will burn you first. – Daenerys

My sweet, silly wife. I have only loved one woman, only one, in my entire life. Your sister. – Petyr “Littlefinger” Baelish

Drinking and lust, no man can match me in these things. I am the god of tits and wine. – Tyrion Lannister

The world is overflowing with horrible things, but they’re all tray of cakes next to death. – Olenna Tyrell

A man with no motive is a man no one suspects. Always keep your foes confused. – Littlefinger 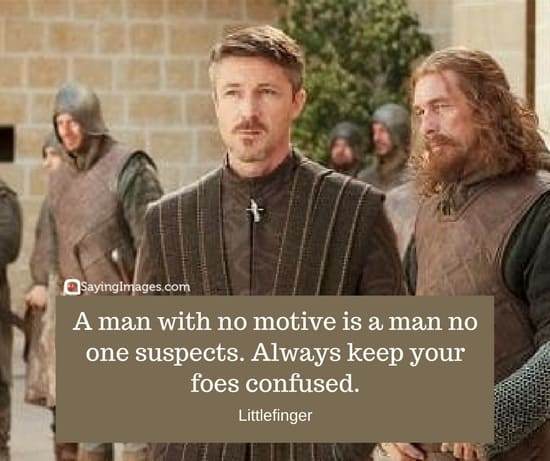 The powerful have always preyed on the powerless, that’s how they became powerful in the first place. – Tyrion Lannister 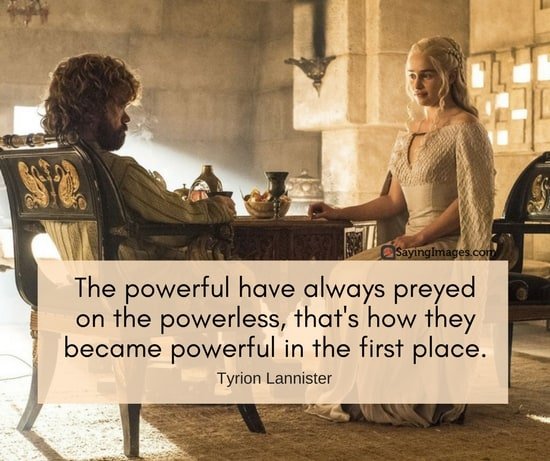 If they’re half as ferocious as their lady, the Boltons are doomed. – Davos Seaworth 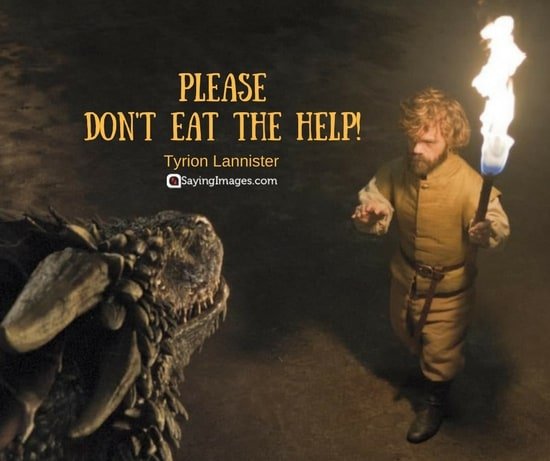 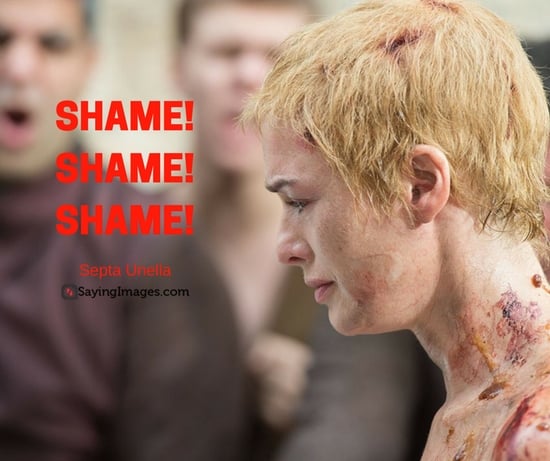 Some men want whores on the eve of battle, and some want gods. – Jon Snow

House Mormont remembers. The North remembers. We know no king but the King in the North whose name is Stark. I don’t care if he’s a bastard. Ned Stark’s blood runs through his veins. He’s my king from this day until his last day. – Lyanna Mormont

The White Walkers don’t care if a man’s free folk or crow. We’re all the same to them, meat for their army. But together we can beat them. – Jon Snow

I prayed to the Gods ‘take him away, make him die.’ – Lady Stark

When the snows fall and the white winds blow, the lone wolf dies but the pack survives. – Sansa Stark

He always come back! – Samwell Tarly 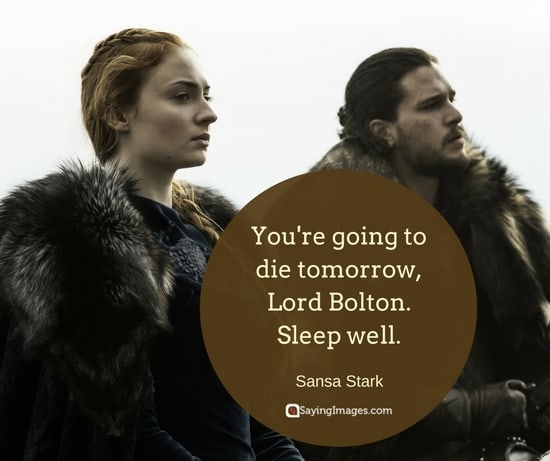 Are you afraid? Good. You’re in the great game now. And the great game’s terrifying. The only people who aren’t afraid of failure are madmen like your father. – Tyrion Lannister 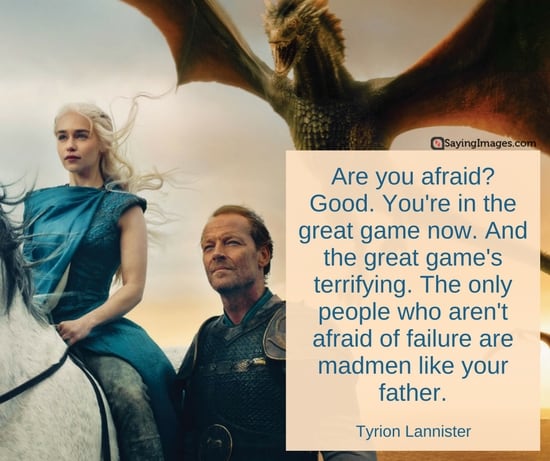 The good lords are dead, and the rest are monsters. – Brienn of Tarth

We hope you like these inspirational Game of Thrones quotes & saying images. Don’t forget to share our pinnable images with fellow fans!

Forgiveness Quotes: To Forgive Is The True Measure of Strength

35 Quotes About Family That Will Warm Your Heart