Beatles fans, celebrate Global Beatles Day with these Beatles quotes. These four young men created a legacy to the world with their music. Yesterday, today, and tomorrow, the music from the Beatles will always be a part of our lives. 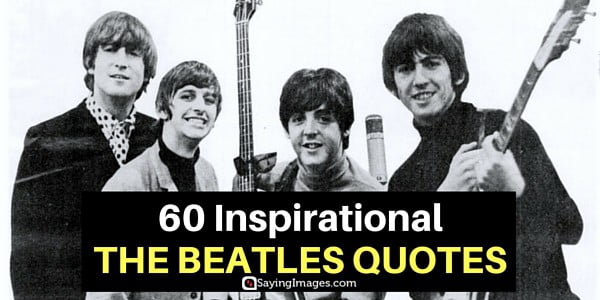 I am alive and well and unconcerned about the rumors of my death. But if I were dead, I would be the last to know. – Paul McCartney, 1969

I’m a tidy sort of bloke. I don’t like chaos. I kept records in the record rack, tea in the tea caddy, and pot in the pot box. – George Harrison, 1969

We all have Hitler in us, but we also have love and peace. So why not give peace a chance for once? – John Lennon

The things is, we’re all really the same person. We’re just four parts of the one. – Paul McCartney 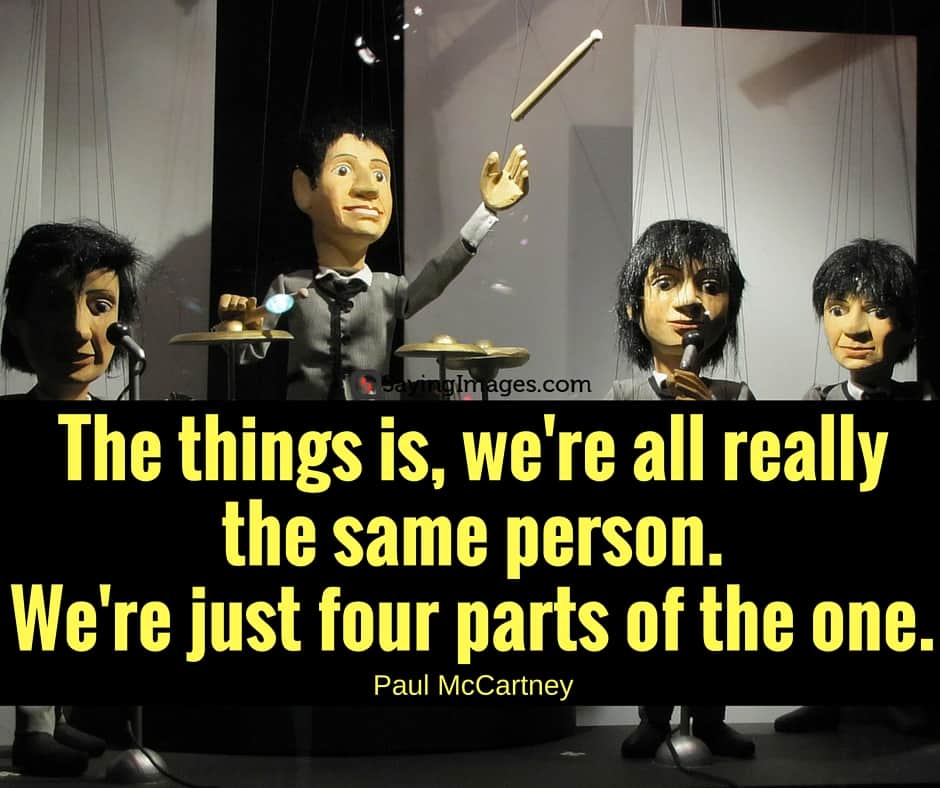 It doesn’t matter how long my hair is or what colour my skin is or whether I’m a woman or a man. – John Lennon

John had his thing, and Paul had his, and together there were two different things all together. But they fit. – Billy Preston

When I was about twelve, I used to think I must be a genius, but nobody’s noticed. If there is such a thing as a genius…I am one, and if there isn’t, I don’t care. – John Lennon

There’s a lot of random in our songs…writing, thinking, letting others think of bits-then bam, you’ve the jigsaw puzzle. – Paul McCartney

Love is like a flower, give it time and it will grow – John Lennon 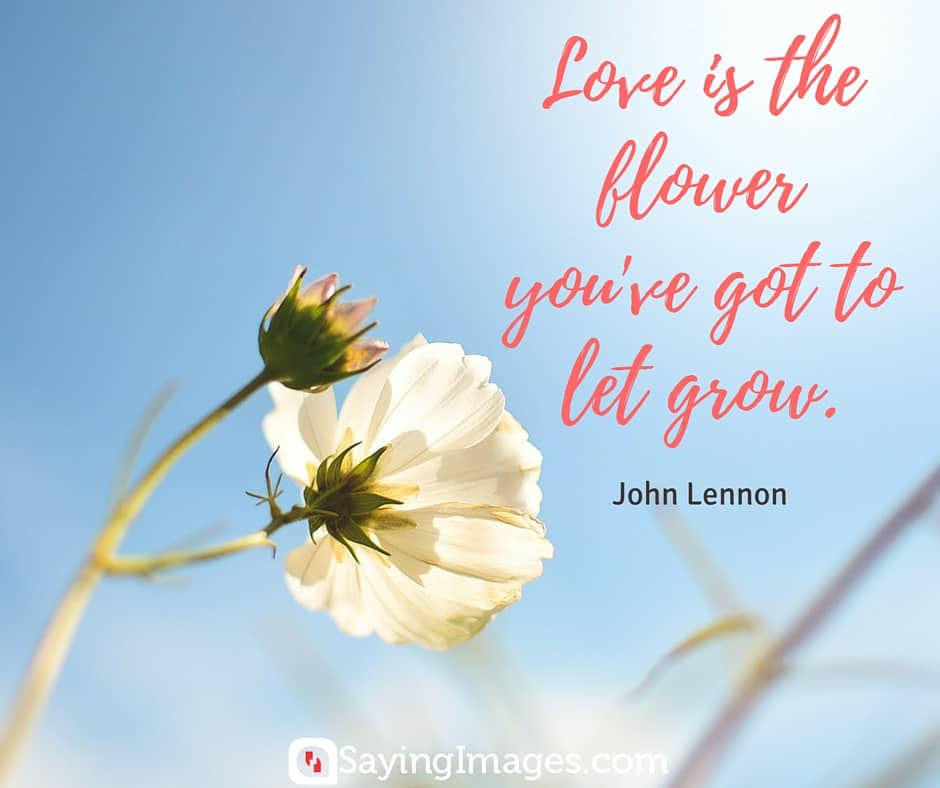 Reality leaves a lot to the imagination. – John Lennon

If everyone demanded peace instead of another television set, then there’d be peace. – John Lennon

We’ve got this gift of love, but love is like a precious plant. You can’t just accept it and leave it in the cupboard or just think it’s going to get on by itself. You’ve got to keep on watering it. You’ve got to really look after it and nurture it. – John Lennon

As usual, there is a great woman behind every idiot. – John Lennon

Love is a promise, love is a souvenir, once given, never forgotten, never let it disappear. – John Lennon 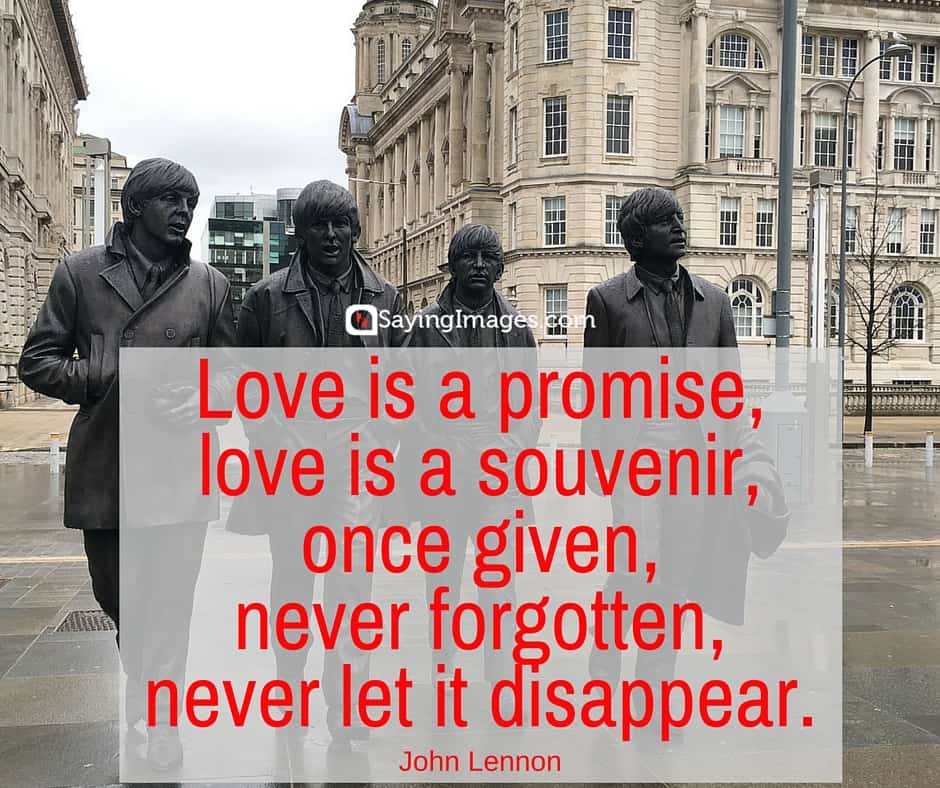 You can go to church and sing a hymn, Judge me by the colour of my skin, You can live a lie until you die, One thing you can’t hide is when you’re crippled inside. – John Lennon

You’re all geniuses, and you’re all beautiful. You don’t need anyone to tell you who you are. You are what you are. Get out there and get peace, think peace, and live peace and breathe peace, and you’ll get it as soon as you like. – John Lennon

My earliest memories as a child are listening to Beatles records, and they are a big part of how I’ve learned to write pop songs. – Christina Perri 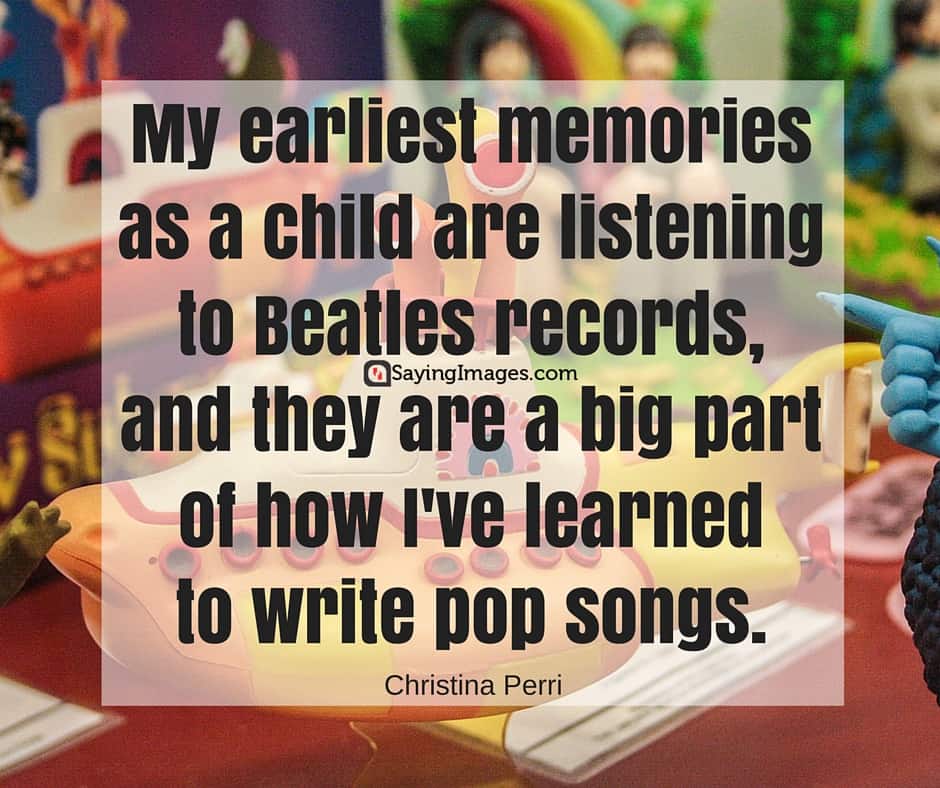 Lots of people who complained about us receiving the MBE received theirs for heroism in the war-for killing people. We received ours for entertaining other people. I’d say we deserve ours more. – John Lennon

It’s hard to follow my own act. But the only answer to that would be to give up after the Beatles. I only had two alternatives. Give up or carry on. – Paul McCartney

As far as I’m concerned, there won’t be a Beatles reunion as long as John Lennon remains dead. – George Harrison

Christianity will go. It will vanish and shrink. I needn’t argue with that; I’m right and will be proved right. We’re more popular than Jesus now; I don’t know which will go first – rock and roll or Christianity. – John Lennon in a 1966 interview

I’m not saying we’re better or greater, or comparing us with Jesus Christ as a person, or God as a thing, or whatever it is. I just said what I said, and it was wrong, or it was taken wrong. And now it’s all this. – John Lennon

The Beatles set the rules. And the rules were: now just because we have long hair doesn’t mean that we’re rebellious. – Davy Jones 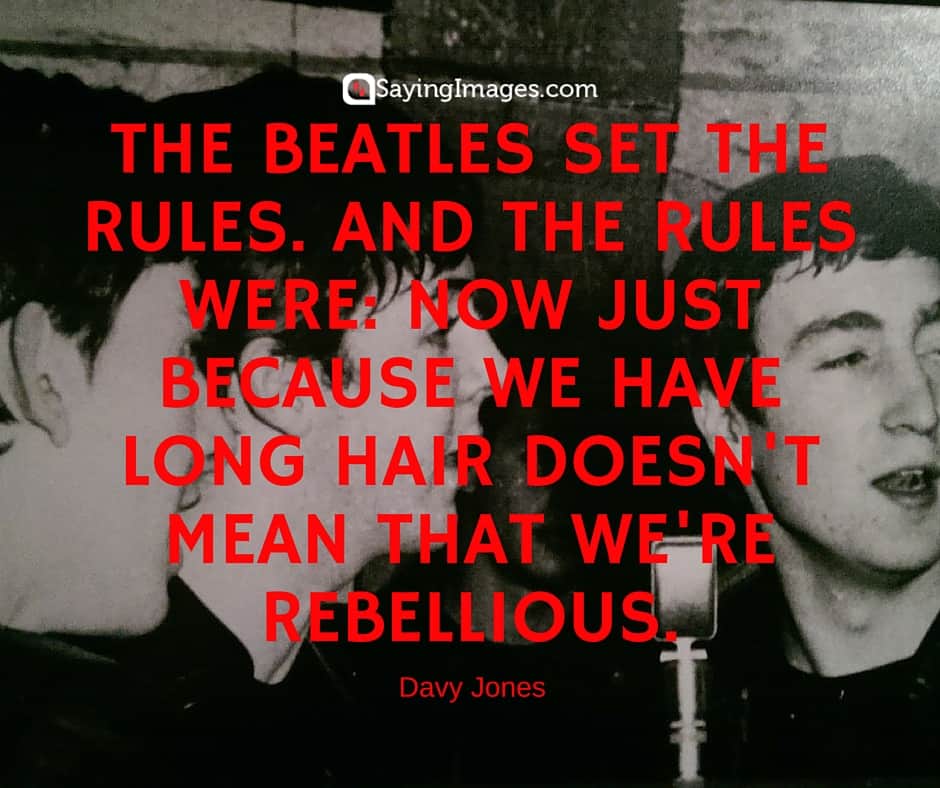 I’ve never really done anything to create what has happened. It creates itself. I’m here because it happened. But I didn’t do anything to make it happen apart from saying ‘Yes’ – Ringo Starr

The nicest thing is to open the newspapers and not to find yourself in them. – George Harrison

My model for business is The Beatles: They were four guys that kept each others’ negative tendencies in check; they balanced each other. And the total was greater than the sum of the parts. – Steve Jobs 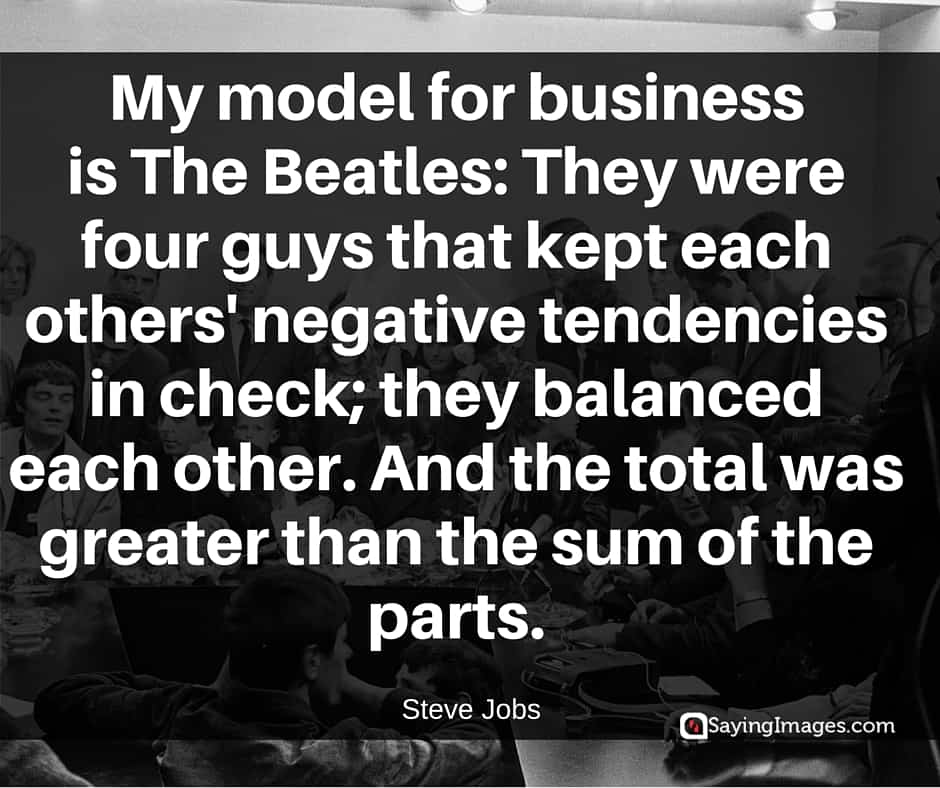 I think people who truly can live a life in music are telling the world, ‘You can have my love, you can have my smiles. Forget the bad parts, you don’t need them. Just take the music, the goodness, because it’s the very best, and it’s the part I give most willingly’ – George Harrison

Nobody controls me. I’m uncontrollable. The only one who can control me is me, and that’s just barely possible. – John Lennon

At the beginning I was annoyed with [John], jealous because of Yoko, and afraid about the breakup of a great musical partnership. It took me a year to realize they were in love. – Paul McCartney

I knew all this Beatles music. I knew the songs phonetically. It was like my whole experience of that music was out of focus, and somebody put the perfect glasses on me, and all of a sudden I could see everything. – Regina Spektor 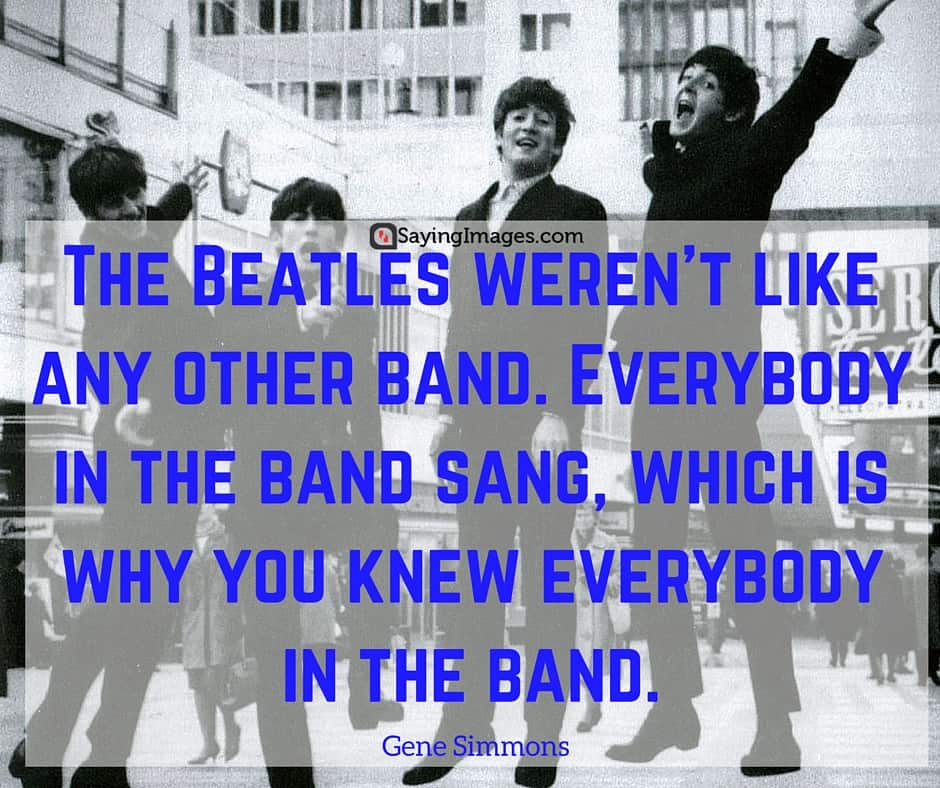 One of my great memories of John is from when we were having some argument. I was disagreeing and we were calling each other names. We let it settle for a second and then he lowered his glasses and he said: “It’s only me.” And then he put his glasses back on again. To me, that was John. Those were the moments when I actually saw him without the facade, the armor, which I loved as well, like anyone else. It was a beautiful suit of armor. But it was wonderful when he let the visor down and you’d just see the John Lennon that he was frightened to reveal to the world. – Paul McCartney (on John Lennon)

I didn’t leave the Beatles. The Beatles have left the Beatles–but no one wants to be the one to say the party’s over. – John Lennon

Those of you in the cheaper seats, clap your hands. And the rest of you just rattle your jewelry. – John

All You Need is Love – The Beatles

So whenever I hear The Beatles I always feel I’ve got a lot in common with everybody else. – Robyn Hitchcock 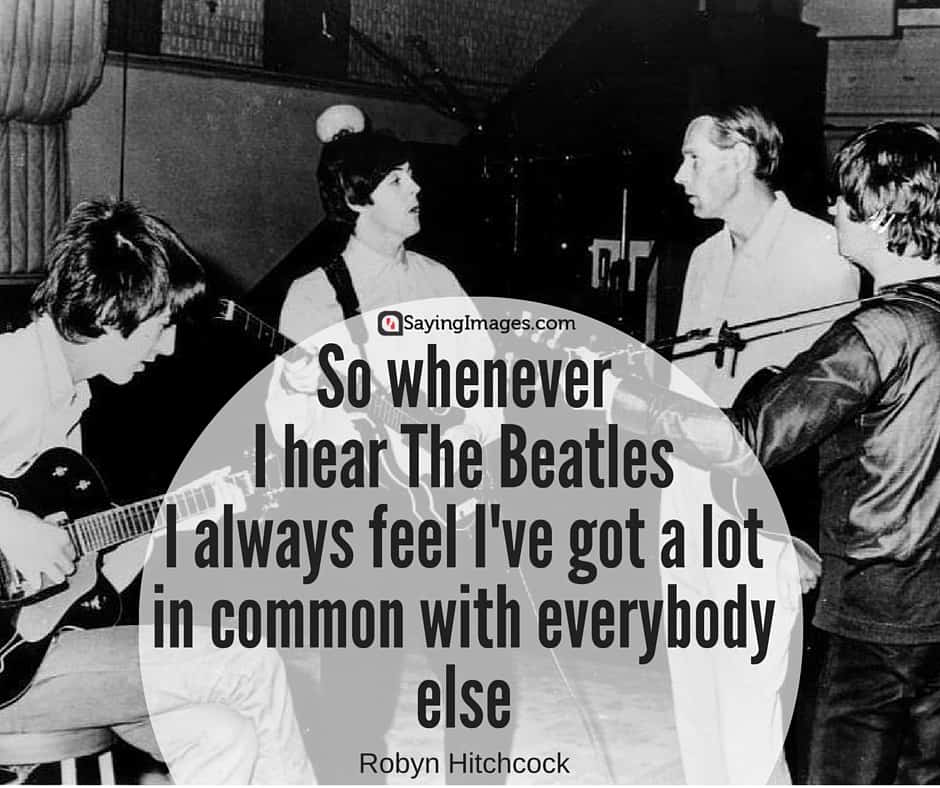 I am going into an unknown future, but I’m still all here, and still while there’s life, there’s hope. – John Lennon (December 1980)

I’m really glad that most of our songs were about love, peace and understanding. – Paul McCartney

You don’t need anybody to tell you who you are or what you are. You are what you are! – John Lennon

I don’t believe in killing whatever the reason! – John Lennon

I can’t tell you how much it hurts to lose him. His death is a bitter cruel blow. I really loved the guy. – Paul McCartney, Dec. 1980

We were very influenced by The Beatles, no question. – Barry Gibb 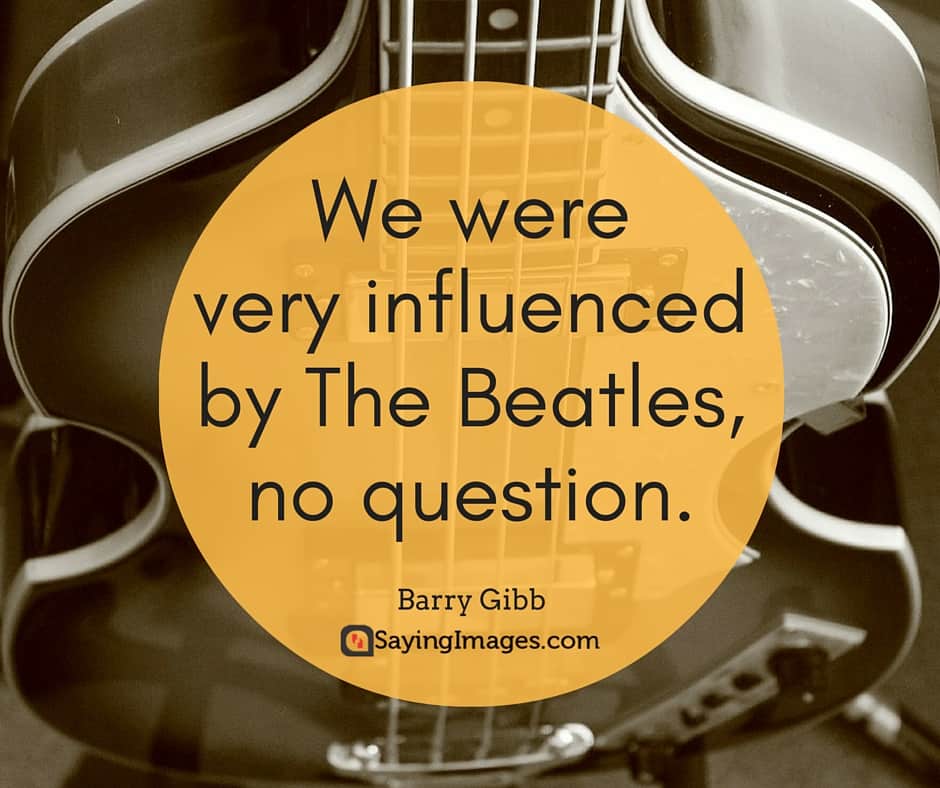 I consider that my work won’t be finished until I’m dead and buried, and I hope that’s a long long time. – John Lennon, Dec. 1980

I hope the fans will take up meditation instead of drugs. – Ringo Starr, 1967

John loved and prayed for the human race. Please tell people to pray the same for him. Remember that he had deep faith in love and that, though he has now joined the greater force, he is still with us. – Yoko Ono, Dec. 1980

The Beatles created something that never trailed off. What a gift that was to their fans. If you’re into the Beatles, you loved them from beginning to end. – Jerry Seinfeld 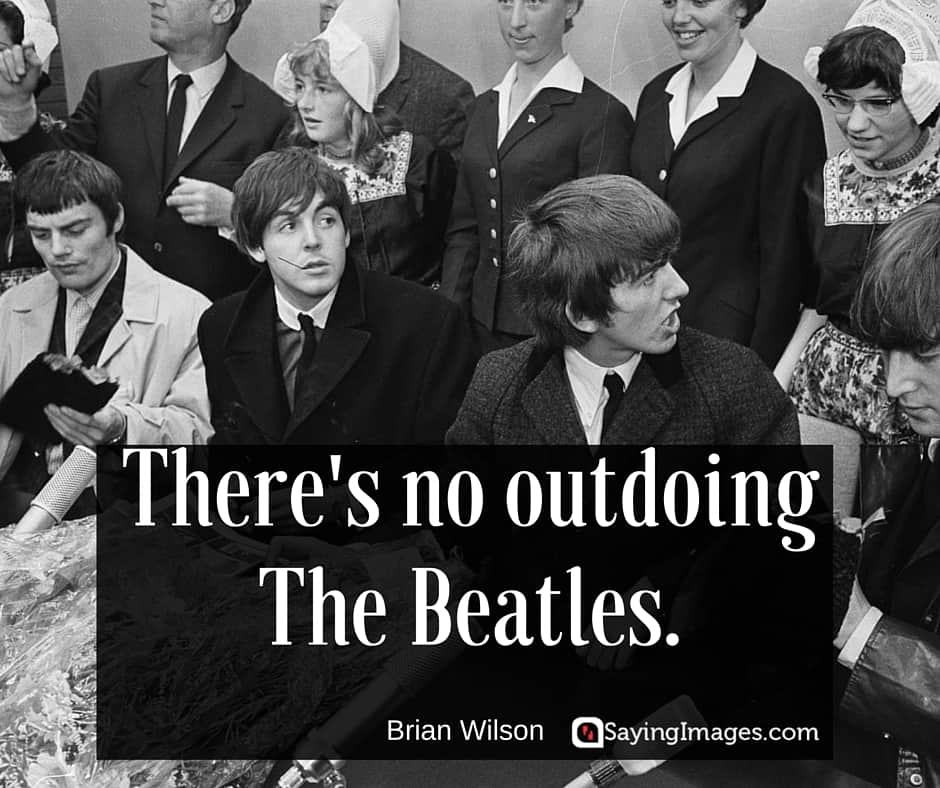 There’s a woman in the United States who predicted the plane we were traveling on would crash. Now, a lot of people would like to think we were scared into saying a prayer. What we did actually–we drank. – Ringo Starr, 1966

There is one thing I used to regret and feel guilty about. When Ringo joined us I used to act all big time with him because I’d been in the business a bit longer and felt superior. I was a know-all. I’d been in the sixth form and thought I’d read a bit, you know. I began putting him off me, and me off me. – Paul McCartney

I declare that the Beatles are mutants. Prototypes of evolutionary agents sent by God, endowed with a mysterious power to create a new human species, a young race of laughing freemen. – Timothy Leary

From one generation to the next, The Beatles will remain the most important rock band of all time. – Dave Grohl 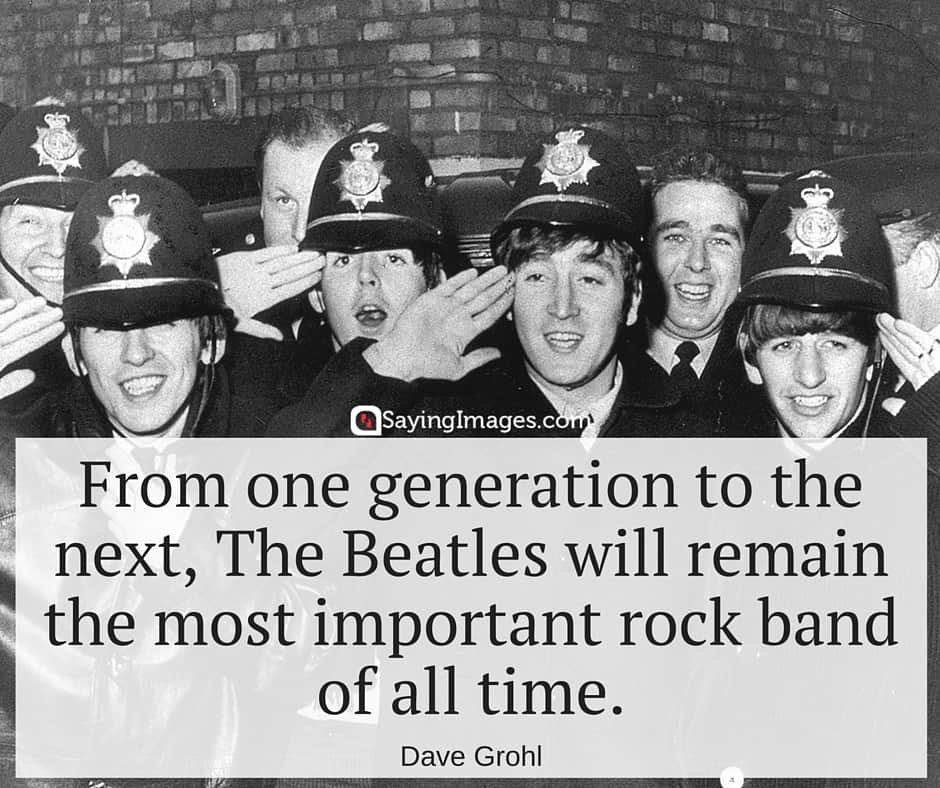 Whether you’re a diehard Beatles fan or just a simple lover of Beatles songs, share these Beatles quotes with your friends and family!